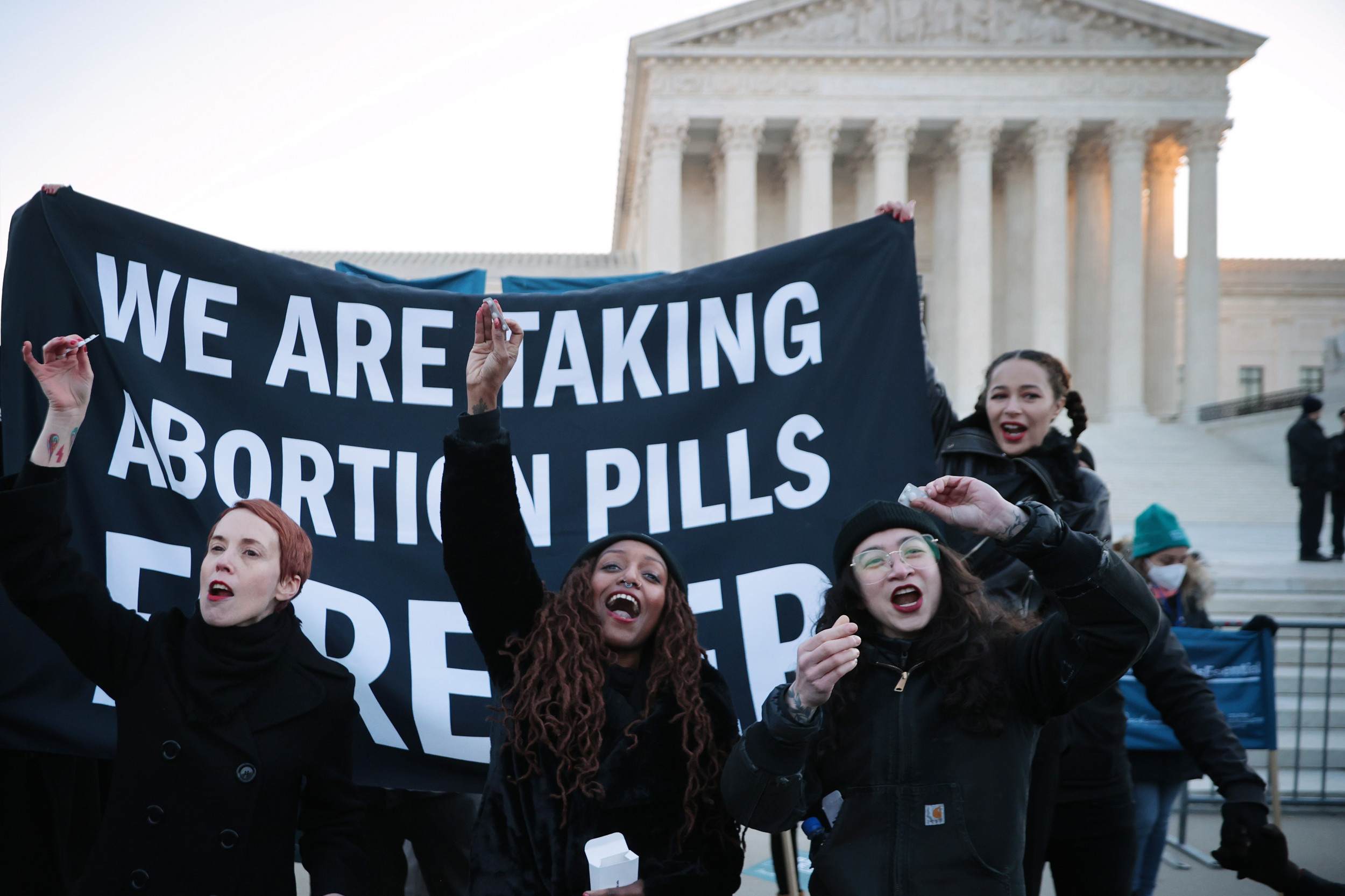 In the aftermath of the leaked Supreme Court draft opinion threatening the status of Roe v. Wade, an uptick of interest in abortion pills was noted by telehealth providers and advocacy groups.

Several providers told Newsweek of substantial increases in activity in the past couple of days. One organization saw a five-fold increase in web traffic, while another reported an increase from five-to-10 requests for help a day to three-to-four an hour.

Some seeking the pills are not even pregnant but hoping to have medication on hand in case the need arises. “Sort of like having Plan B in your cabinet, now we’re having Plan C—or abortion pills—in your cabinet,” said Christie Pitney, the CEO of Forward Midwifery.

Pitney—who runs a private telehealth practice in Washington, D.C. and is a U.S. prescriber for Aid Access—said she has gone from seeing an average of 18 patients per week to 14 per day since Monday. The patients, she said, are “almost exclusively new.”

As a volunteer provider for the Miscarriage and Abortion hotline, Pitney worked a morning shift on Tuesday, responding to multiple calls inquiring about abortion pills.

The SCOTUS document, first obtained by Politico, was written by Supreme Court Justice Samuel Alito and indicated the majority of the court is looking to overturn the landmark abortion rights ruling.

Since it was made public on Monday, the leak has sparked protests and heated debates.

Fearing incoming bans and restrictions in a post-Roe America, people are scrambling to keep their options open. This caused increased interest in abortion pills, from spikes in Google searches to viral social media posts raising awareness about the drugs.

Medical abortions account for more than half of all U.S. abortions, according to the Guttmacher Institute, a non-profit organization that supports reproductive rights.

Abortion pills typically involve a regimen of two medications—mifepristone and misoprostol—a combination that is most effective up to 10 weeks of pregnancy. Misoprostol can also be used on its own.

While abortion pills can be administered in clinical settings, self-managed abortions at home are also commonplace. In December 2021, the FDA approved the medications being sent to patients by mail.

Telehealth providers—like Hey Jane, Abortion on Demand, Choix, Forward Midwifery and Pills By Post—have been instrumental in providing care to those without easy access to abortion clinics. However, they can only operate in a limited number of jurisdictions.

Nineteen states effectively barred telemedicine abortions by requiring the physical presence of a clinician when administering medication abortion, according to the Guttmacher Institute. Mailing abortion pills is banned in Arizona, Arkansas, and Texas, while bans in Montana, Oklahoma, and South Dakota were subject to blocks by courts.

The Guttmacher Institute found 16 state legislatures to have introduced bans or restrictions on medication abortion this year alone.

In addition to partnering with U.S.-based clinics, Aid Access facilitates the delivery of abortion pills to patients in more restrictive states by having European doctors write prescriptions and a vetted Indian pharmacy fill them.

A number of organizations that mail out abortion pills or raise awareness about them told Newsweek they experienced a spike in interest since Monday.

Razel Remen, a Michigan-based doctor who runs Pills By Post, told Newsweek by email: “All of the telemedicine services have seen an uptick. Normally at Pills by Post we would get 5-10 requests a day, since the announcement we are getting 3-4 requests an hour.”

Choix CEO Cindy Adam said that while it is “too early” to comment on influxes of patients seeking care, the organization experienced an “outpouring of people and medical providers reaching out who want to work with us to provide or support the provision of abortion care.”

“As understanding about abortion care via telehealth grows—and as access continues to get more restricted—we anticipate even greater influxes of patient care requests,” Adam told Newsweek via email.

Elisa Wells, co-founder and co-director of Plan C Pills—which informs people on access to abortion pills—said the organization’s website was visited by 16,000 users on Monday and 23,000 on Tuesday.

Its baseline website traffic had previously been 2,400 users a day.

Most of Plan C Pills’ traffic usually comes from Texas, where the nation’s most restrictive abortion law—Senate Bill 8, or the “Texas Heartbeat Act”—had been in place since September.

“Any effort to prevent access to what is common necessary medical care are egregious on the part of the courts, and also on the part of state legislators,” Wells told Newsweek. “And we know that they will take advantage if the Supreme Court decision is validated.”

I Need An A, which similarly provides resources to people seeking abortions, told Newsweek it had seen a five-fold increase in overall daily traffic to its website on both Monday and Tuesday.

“We do not believe that people need to follow unjust laws,” Bonow said.

Some telehealth providers received a boost in patients even before Monday’s bombshell SCOTUS leak.

In a statement emailed to Newsweek, Kiki Freedman, CEO and co-founder of Hey Jane, said mail-order abortion care is “now likely to be the most viable form of access for most of the country.”

“Already, Hey Jane has seen an increase in patients reporting that they’re coming to Hey Jane because of longer-than-expected appointment wait times, which suggests to us that bans in places like Texas are already having a ripple effect; losing Roe would only magnify that,” Freedman said.

“We’ve been seeing more and more patients over the past few months, and I think some of that is the result of SB 8 in Texas already, of patients perhaps traveling to other states and obtaining pills there,” Coplon told Newsweek.

In spite of Monday’s “devastating” news, Coplon said she wants to ensure the public is aware that abortion is still currently legal in all 50 states.

“Right now, on the ground, abortion is legal, and there are people in every state, abortion funds and others in the community, who are there to help folks navigate this very complex system of getting what they need,” Coplon told Newsweek.

“I want to make sure people know that right now, they can get an abortion and there are people who will help them try to make that happen.”