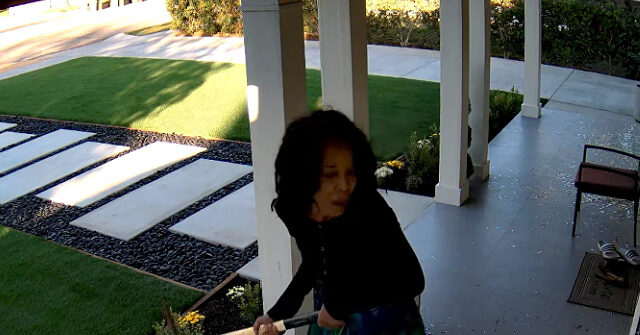 A woman was caught on video smashing the front of a Southern California home with a pickaxe while a baby was sleeping inside.

The shocking attack occurred in Pasadena in the 1700 block of Ashbury Drive at around 5 p.m. Monday, ABC 7 reported.

In the home security camera footage, the alleged suspect, Beverly Baker, 65, is seen walking up the property’s driveway without interruption before she starts smashing the home’s front door windows with a pickaxe.

The homeowner’s six-week-old daughter was sleeping near a front window when the attack occurred. His mother-in-law, who was babysitting the infant girl, could be heard screaming after the suspect smashed the second window. The mother-in-law reportedly moved the baby away from the window as quickly as possible.

The suspect walked away after the first attack but then returned to smash more windows. As she walked away a second time, she could be yelling, “Questions? Questions, anyone? I’ll be back. Get out”

Arman Tchoukadarian, the homeowner, is thankful for his mother-in-law’s prompt actions to move his daughter away from the window and crazed attacker.

“My mother-in-law’s first instinct was to grab the baby,” Tchoukadarian told ABC 7. “Two seconds later, all you see is huge shards of glass in the bassinet where she would be.”

“It was [a] miracle she reacted fast enough or else my daughter would be dead,” he added.

Baker was arrested at her home a few blocks away in the 1600 block of Casa Grande Street. She allegedly refused arrest for about 30 minutes but eventually was taken into custody and was charged with felony vandalism.

Police say Baker might be suffering from mental illness, although it is not confirmed. Baker is set to be arraigned on October 28.

The family has since filed a restraining order against Baker, CBS Los Angeles reported.

The estimated damages to the home are approximately $20,000, police say.