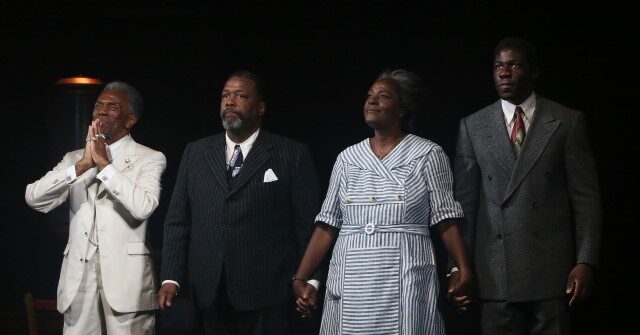 Police officers escorted an unruly woman from a Broadway theater Tuesday after she disrupted a performance of the Arthur Miller classic Death of a Salesman.

The production crew was forced to turn on the house lights at the Hudson Theatre on 44th Street during the second act of the performance after the irate audience member started shouting at The Wire star Wendell Pierce, who was performing as the play’s protagonist Willy Loman.

Pierce asked the woman to leave the theater before police eventually escorted her out, according to Instagram user Mike Rubin. The user noted that the woman appeared “inebriated.”

After the audience member left, Pierce reverted to character and continued the performance as if nothing had happened. Rubin said Pierce’s performance was “remarkable given the real-life drama that could have derailed the entire night.”

A video shared on Twitter shows the audience applauding when police officers walked into the theater to escort the woman out.

Another video shared on TikTok shows Pierce doing whatever he could to end the woman’s antics, including offering a refund for her ticket. Audience members can be heard expressing their frustration at the woman.

“We’re grateful to the entire team at the Hudson Theatre for working together to resolve the situation and resume the performance as quickly as possible,” the producers of the play said in a statement to the Hollywood Reporter.

According to the outlet, no arrests were made.

Death of a Salesman will continue to run at the Hudson Theatre until January 15.