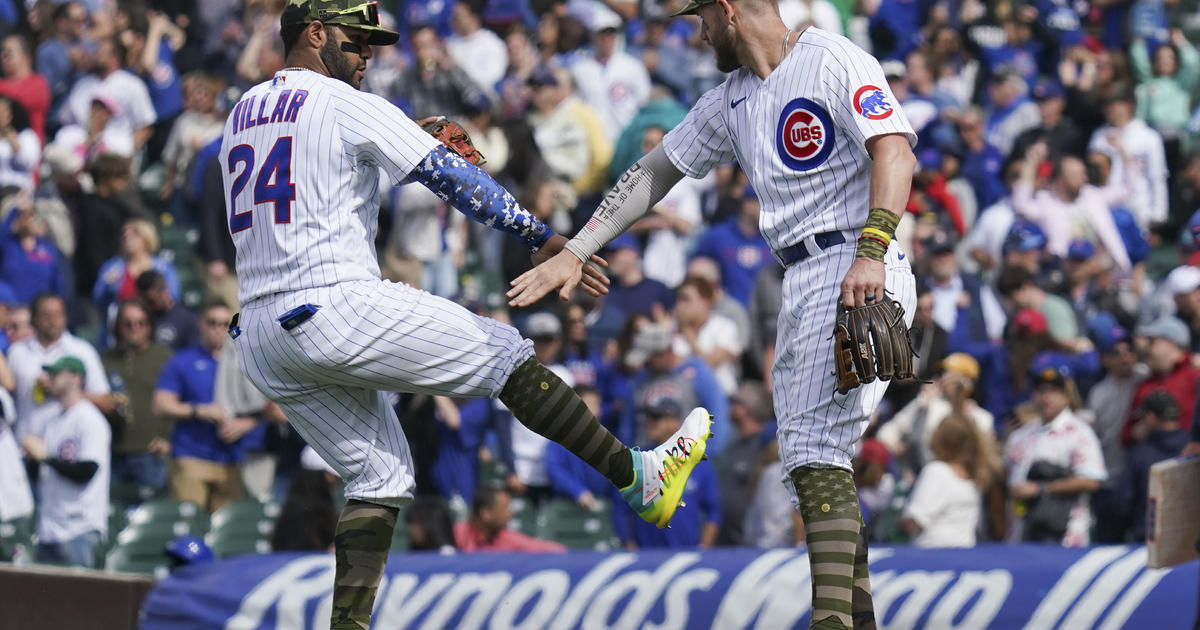 CHICAGO (AP) — Patrick Wisdom and Frank Schwindel hit consecutive homers against Ian Kennedy in the eighth inning, and the Chicago Cubs beat the Arizona Diamondbacks 5-4 on Sunday to avoid a four-game series sweep.

Wisdom had a bouncer go just foul right before he connected for his ninth homer, sending a leadoff drive deep to center field. Schwindel then drove a 1-0 pitch from Kennedy (3-3) into the bleachers in left for his fourth homer.

The Cubs had dropped four in a row, blowing a 4-0 lead on Saturday.

Ketel Marte and Pavin Smith each had two hits for Arizona, which was trying for its first sweep at Wrigley Field since Aug. 9-11, 1999. David Peralta snapped a tie with a fielder’s choice that drove in Geraldo Perdomo in the seventh.

Chicago grabbed the lead in the second. With two out and the bases loaded, Higgins lined his second big league hit into the corner in right and used a headfirst slide to beat the throw into third.

Before Higgins’ clutch swing, it looked as if Merrill Kelly might escape the inning unscathed. After the first three batters reached — including Wisdom’s infield single on a popup that dropped in front of third baseman Drew Ellis — Alfonso Rivas struck out looking and Andrelton Simmons fouled out.

The Diamondbacks rallied in the sixth, tying it at three on two-out RBI singles for Marte, Smith and Jake McCarthy. Marte’s hit drove in Ellis, who led off with a double to center for the team’s first extra-base hit against Wade Miley.

Diamondbacks: 3B Josh Rojas (left hand contusion) was out of the lineup. Manager Torey Lovullo said he doesn’t think Rojas will need a stint on the injured list. Ellis was recalled from Triple-A Reno and INF Yonny Hernandez was sent down. … Lovullo said he talked to SS Nick Ahmed on Saturday, and he has a text chain going with C Jose Herrera, LHP Kyle Nelson and OF Cooper Hummel. Herrera, Nelson and Hummel are on the IL because of COVID-19 protocol, and Ahmed also is on the IL with an unspecified issue. Lovullo said all four players are doing well.

Cubs: C Willson Contreras (right hamstring) is day to day after he left Saturday’s 7-6 loss in the third inning. C P.J. Higgins was promoted from Triple-A Iowa, and INF Ildemaro Vargas was designated for assignment. … INF Nico Hoerner (right ankle) hit on the field, and manager David Ross said he planned to take some ground balls. INF Nick Madrigal (low back strain) played catch. Ross said he thinks Madrigal will need a rehab stint in the minors, but Hoerner could return as soon as the team’s upcoming series at Cincinnati.

Cubs: LHP Drew Smyly (1-5, 3.97 ERA) pitches Monday night at Cincinnati in the opener of a four-game series. The Reds have not announced their starter.