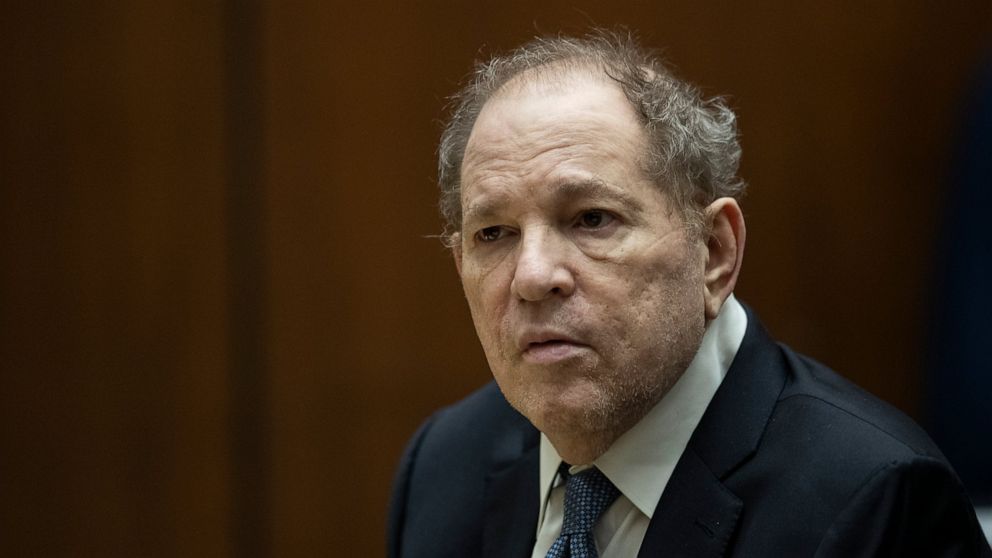 LOS ANGELES — An attorney for Harvey Weinstein peppered a woman with questions Wednesday on the lack of forensic evidence that the movie magnate raped her in 2013, or that he was even at the hotel where she says the assault occurred.

“You don’t have any physical evidence to present to this jury that any of this happened, do you?” lawyer Alan Jackson asked pointedly during cross-examination.

When the judge at the 70-year-old Weinstein’s Los Angeles trial sustained an objection to the question because it called for speculation, Jackson got more specific:

“No,” the woman said quietly.

“No,” she replied, then added, “Do you think somebody after rape makes a video?”

She began crying softly as she answered “no” to a series of similar questions about whether she had any documentation of bruises, scrapes, cuts, or handprints on her face from Weinstein holding her down, or had been given a sexual assault examination.

“Do you have any physical evidence that you were even with Mr. Weinstein?” Jackson asked.

Her crying grew louder as she answered, “I had his jacket, but I gave it away.”

The woman, a model and actor who was working in Rome, is the the first of Weinstein’s accusers to testify at the trial and spent portions of three days on the witness stand.

Prosecutors have presented photographs and other evidence that both Weinstein and the woman were at the Los Angeles Italia Film Festival, which she had come to California to attend in February 2013.

But they have not yet produced anything that puts Weinstein at her hotel on the night she says he forced her to perform oral sex on her bed then raped her in her bathroom.

The woman did not go to police until October of 2017, when women’s stories about Weinstein made him the central figure in the #MeToo movement.

She maintains that Weinstein left her jacket in the room and she gave it to hotel staff, but no lost-and-found records have been discovered to demonstrate it.

Asked whether the explosion of media stories around Weinstein prompted her to go to police, the woman repeated earlier testimony that she had already decided to file a report earlier in the year when she urged her teenage daughter to go to authorities over sexual harassment she’d been subjected to at school.

The woman is going only by “Jane Doe 1” in court. Her age and birthplace have also been kept out of court proceedings, though she has said her first language was Russian and she was living at the time with her three children in Italy, where she had married into considerable wealth.

The Associated Press does not typically name people who say they have been sexually abused unless they come forward publicly.

Weinstein’s defense tried to poke holes in her testimony and press on inconsistencies in previous accounts she gave to police, to prosecutors, to a grand jury, and in the first two days of her trial testimony.

In graphic questioning, Jackson dwelt on the woman’s description in her initial interview with police of oral sex she said Weinstein forced her to perform. Jackson suggested that Weinstein’s unusual genital features after a surgery he had years earlier made the acts she described impossible.

The same acts went unmentioned during her 2020 grand jury testimony, and Jackson asked her whether she had learned more about Weinstein’s sex organs from prosecutors and thus changed her story.

Under questioning later from the prosecution, she described “very bad scarring tissue” around Weinstein’s genitals.

It was the first time jurors heard from a witness about Weinstein’s anatomy, which arose often in his 2020 trial in New York, where he was convicted of rape and sexual assault and sentenced to 23 years in prison.

The woman told prosecutor Paul Thompson that she had been having panic attacks and had hardly slept or eaten since her testimony began Monday afternoon. It finally ended late Wednesday.

Weinstein has pleaded not guilty to 11 counts of rape and sexual assault involving five women.

When prosecutors gave their opening statement Monday, however, they excluded one of the women, putting into question whether the four counts involving her will be addressed during the trial.

The district attorney’s office has declined to explain when asked about the issue.

Weinstein’s attorneys said no charges have been dropped.

For more on the Harvey Weinstein trial, visit: