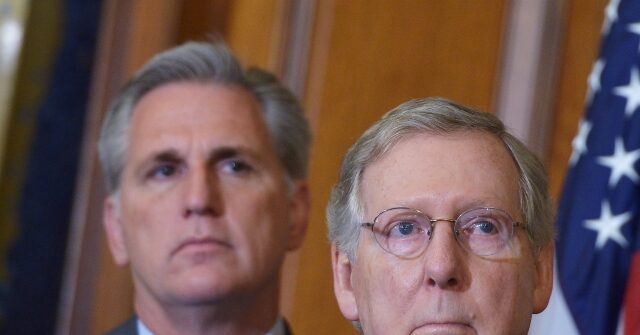 The survey, taken roughly a week after the midterm election, which saw Republicans taking back the House and Democrats retaining the Senate, asked, “After the results of the 2022 midterm elections do you think Republicans need new leadership in Congress?”

The survey was taken November 16-20, 2022, among 1,084 likely general election voters and has a +/- 2.9 percent margin of error. It follows Sen. Mitch McConnell (R-KY) winning reelection as Senate GOP leader despite ten defectors supporting Florida Sen. Rick Scott (R-FL). Former President Donald Trump is among those who publicly stated that Scott would be “much better than” McConnell as leader.

“Well, I think he’s got a lot of pressure,” Trump told Glenn Beck. “He’s … his wife is a big person for Chinese investment, and his family and him in China. I don’t think that’s appropriate. No, I think Rick Scott would be much better than McConnell.”

“Now I’m not a fan of McConnell and I am a fan of Rick Scott, and you have others in there that would be very good,” he added.

Overall, 37 voted for McConnell, and ten voted against. As Breitbart News reported, “The votes against McConnell mark the first time he has received a ‘no’ vote as leader, a sign the Republican Party has begun to turn against his establishment agenda.

However, McConnell claimed that he was in “no way offended” by having an opponent or facing opposition.

Meanwhile, House Republicans overwhelmingly voted in favor of Rep. Kevin McCarty (R-CA) taking the helm as leader, setting him up for a Speaker vote in January, where he needs 218 votes.

“Next year, Republicans will start every day of Congress with prayer and the Pledge of Allegiance. No exceptions,” McCarthy declared in a viral post Monday: