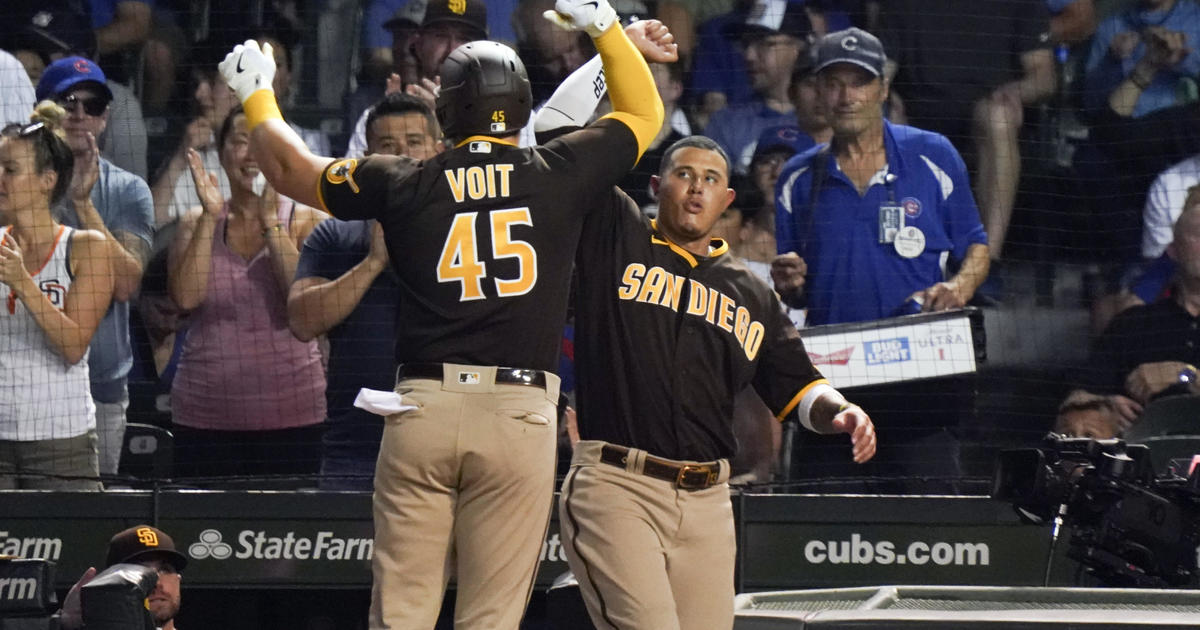 CHICAGO (AP) — Luke Voit hit a two-run homer and a three-run double as the San Diego Padres rallied from a five-run deficit to hand the Chicago Cubs their eighth straight loss, 12-5 on Tuesday night.

The Padres trailed 5-0 when Cubs starter Kyle Hendricks was pulled after allowing a double to Jake Cronenworth to start the sixth inning. Voit homered off reliever Chris Martin to spark a four-run sixth, and his double off Mychal Givens gave the Padres the lead for good at 7-5 and highlighted a six-run seventh.

The Padres, who entered Tuesday’s game tied with the Dodgers for first place in the NL West, have won six of eight. The Cubs’ skid is their longest since since losing 12 in a row from Aug. 5-16, 2021.

Willson Contreras homered twice, drove in three runs and scored three times on a 3-for-4 night for the Cubs. He leads major league catchers with 12 homers.

Voit has 16 RBIs in his last 14 games after driving in three in his previous 15.

The Padres’ rally took left-hander Sean Manaea off the hook. He was tagged for five runs on eight hits in four-plus innings. Kyle Tyler (1-0) pitched two scoreless innings in relief.

Nomar Mazara drove in three runs with singles in the sixth and seventh. Jorge Alfaro hit his fourth homer in the eighth off left-hander Eric Stout.

Hendricks, pitching for the first time since June 1 because of shoulder fatigue, allowed one hit over the first four innings but needed a strikeout of Trent Grisham with runners at first and second to end the fifth.

Grisham executed a bunt single off Scott Effross (1-2) that started the six-run seventh.

Cubs first baseman Frank Schwindel received a clip of “The Late Show” host Stephen Colbert poking fun of his 35.1 mph pitch Sunday that Kyle Higashioka of the Yankees hit for a home run.

Schwindel said he does not watch the show but took Colbert’s ribbing in style. Schwindel said he gave up a pair of homers to Corey Dickerson and Lars Nootbaar of the Cardinals on June 3 on pitches clocked at 61 mph.

“I tried to go a little slower,” Schwindel said. “It didn’t work, but I got some good guys out. So it is what it is. It was one of those things. It was fun to be on the mound in New York.”

Padres RHP Joe Musgrove will pitch Thursday’s series finale on five days’ rest. Musgrove (7-0) hasn’t allowed a run in two starts with five days’ rest, compared to a 1.35 ERA in three starts on four days’ rest and a 2.19 ERA with six days or more between starts. “He’s had success doing that, and we’ll ride that for now,” acting manager Ryan Flaherty said.

Cubs: LHP Wade Miley (left shoulder) will not resume baseball activities until at least the end of the week. … INF David Bote (dizzy spells) will report to Triple-A Iowa and will start a rehab assignment this weekend. … 2B Nick Madrigal (groin tightness) missed his fourth consecutive game.

The Padres have not named a starter for Wednesday’s game, although LHP Ryan Weathers is a candidate to be promoted from Triple-A El Paso, where he is 4-7 with a 5.32 ERA. The Cubs also haven’t named a starter, though RHP Caleb Kilian could be promoted from Triple-A Iowa. Kilian allowed three runs in five innings of a 7-4 loss to St. Louis in his major league debut on June 4.