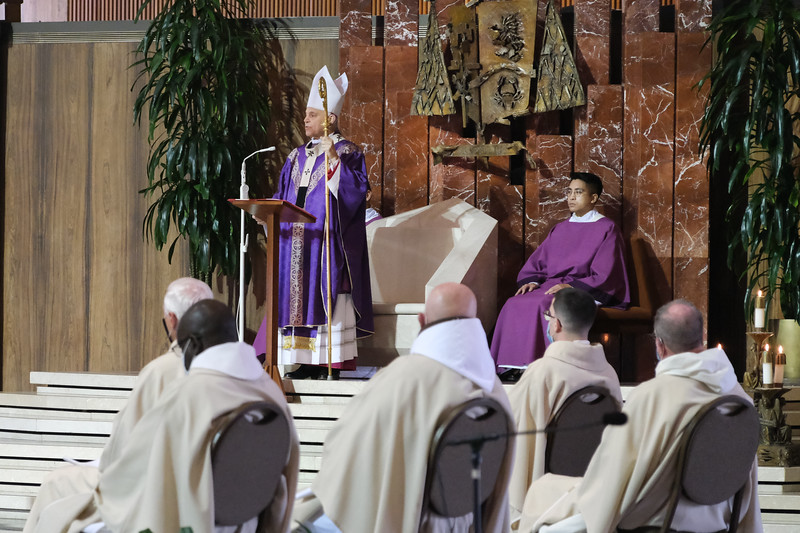 Pope Emeritus Benedict XVI was constantly misinterpreted and vilified no matter what he did, San Francisco Archbishop Salvatore Cordileone told Newsweek after the death of the former pontiff at the age of 95.

Benedict became the first Pope to abdicate in nearly 600 years in 2013. For critics, he was tarnished by an uncompromising stance as a traditionalist as well as leaks of Vatican back-stabbing and corruption that emerged during his reign and later accusations of overlooking priestly sexual abuse earlier in his career—for which he asked forgiveness and said he had been unaware at the time.

But for many conservatives he was a staunch defender of the church, Christian faith and morality as they faced an unprecedented assault from secularism and moral relativism.

“He was the most misunderstood major personality of our lifetime,” San Francisco Archbishop Salvatore Cordileone told Newsweek. “There was this public perception and then there was the real Joseph Ratzinger, who was the opposite.”

Cordileone, who was named archbishop of San Francisco on July 27, 2012, by Benedict, said he interacted with the late pope on several occasions as a bishop, “but I didn’t know him personally.” He first heard Benedict speak at a meeting of priests in the late 1980s when then-Cardinal Ratzinger was prefect of the Congregation of the Doctrine of the Faith, the Vatican’s agency for enforcing church doctrine.

“You heard these expressions about the “panzer” cardinal, but he was the opposite,” Cordileone said, using an expression referring to the tank of the Nazi era, when Ratzinger had grown up in Germany.

“He was gracious, humble and gentle. He listened well and respectfully to the other person’s point of view. I was shocked at how opposite he was from the public perceptions.”

Benedict—whose election on April 19, 2005, was so controversial that the American cardinals who helped elect him held a press conference the next day explaining their choice—paid a price for not budging on core Christian doctrines, said the archbishop.

“He stood for certain truths not popular these days, but he articulated them really well, so people had to think about them, such as the beginning of life, marriage and family, sexual morality,” he said.

“I think he was the right man at the right time for a very difficult job.”

Bishop Robert Barron of the Diocese of Winona-Rochester, Minnesota, also described how the late pope was totally misconstrued.

“Often pilloried by his opponents as a fire-breathing conservative, he was in fact one of the most balanced, nuanced, and stabilizing figures within the Catholic ambit” Barron wrote Saturday.

“I alluded above to his reputation in some circles as Panzerkardinal (the tank-Cardinal), an uncompromising, even cruel, reactionary. Those who knew Joseph Ratzinger personally could only shake their heads at such a characterization.”

Benedict was also lionized after his death at a Vatican residence on Saturday by non-Catholics, including Andrew T. Walker, Christian ethics and public theology professor at the Southern Baptist Theological Seminary in Louisville, Kentucky.

“Protestants have their strong disagreements with the papacy,” Walker tweeted early Saturday, “but Pope Benedict XVI was a global bulwark who stood heroically and prophetically against moral relativism. He understood, in almost unrivaled ways, the moral nihilism and secular carnage that secularism creates.”

San Francisco Archbishop Salvatore Cordileone presides over a Requiem Mass for the Homeless last year at the Cathedral of St. Mary of the Assumption
Archdiocese of San Francisco

Benedict’s childhood experiences in Nazi Germany gave him a taste for what happens when a country abandons moral principles. He himself was forcibly drafted into an anti-aircraft unit as a teenager.

After he and his brother, Georg, became priests in 1951, his star rose quickly to the point at which he became a theological advisor to German cardinals at the Second Vatican Council from 1962-1965.

Then known as a church liberal, he drifted toward conservatism during the following decades. His reputation as a brilliant priest-academic got him appointed as archbishop of Munich in 1977 by Pope Paul VI, who three months later elevated Ratzinger to cardinal. In 1981, he was appointed to head the Congregation for the Doctrine of the Faith.

Benedict served much of his career under the ultra-popular John Paul II, and took the brunt for enforcing the Polish pope’s conservative policies. Labeled “God’s Rottweiler” in the media, then-Cardinal Ratzinger was known for authoring documents that were unpopular with some such as a 1986 Vatican directive “On the Pastoral Care of Homosexual Persons.” Homosexual inclinations led toward “an intrinsic moral evil,” the document said; however any violence toward gay people “deserves condemnation of the Church’s pastors wherever it occurs.”

He recognized the need to address priestly sexual abusers before many other church officials were, Cordileone said.

Before the Congregation took over, some individual bishops were flouting church law by allowing the credibly accused priests to go unpunished. Many sex abusers were simply moved to another parish until the Vatican ordered all their cases sent to Rome.

Yet Benedict himself was condemned in 2022 in a church report – which included 92 pages of his written testimony – for overlooking priestly sexual abuse in at least four instances while he was archbishop of Munich from 1977-1982. Benedict later asked for forgiveness for “abuses and errors,” but continued to assert he had been unaware of his priests’ criminal actions at the time.

San Francisco Archbishop Salvatore Cordileone was appointed to his present post by Pope Benedict XVI in 2012.
Archdiocese of San Francisco

“People handled those things differently back then,” Cordileone said of the Benedict’s response. “He handled the problem as best he could with what he knew.”

Where Benedict shone—in the eyes of many Catholic conservatives—was his 2007 apostolic letter allowing priests to use the 1962 Tridentine – or Traditional Latin Mass—in services. Previous popes had discouraged or limited its use after the Second Vatican Council.

“Catholics loved their tradition and wanted to see a greater return to appreciation of it and clarity of doctrine and a return to greater reverence and beauty in worship. He did stand for that.”

In 2021, Benedict’s successor Pope Francis reversed the ruling and imposed further restrictions on use of the Latin Mass, claiming the ancient rite was dividing Catholics rather than uniting them.

Benedict remained a mysterious figure to much of the world because people didn’t study what he actually wrote, Cordileone said.

“I think people didn’t bother to read him,” he added. “He was a brilliant communicator. He had an amazing ability to summarize volumes of wisdom in one pithy phrase, like his famous “dictatorship of relativism,” a phrase coined by Benedict in a 2005 speech just before he was elected pope.

“He had a remarkable understanding of our tradition and a way of communicating it accessible to everyone.

“People need to see the real Joseph Ratzinger. Approach him with an open mind and understand the truths he was trying to articulate. I think people instinctively didn’t like what he stood for and believed a stereotype instead of delving into his teachings.”