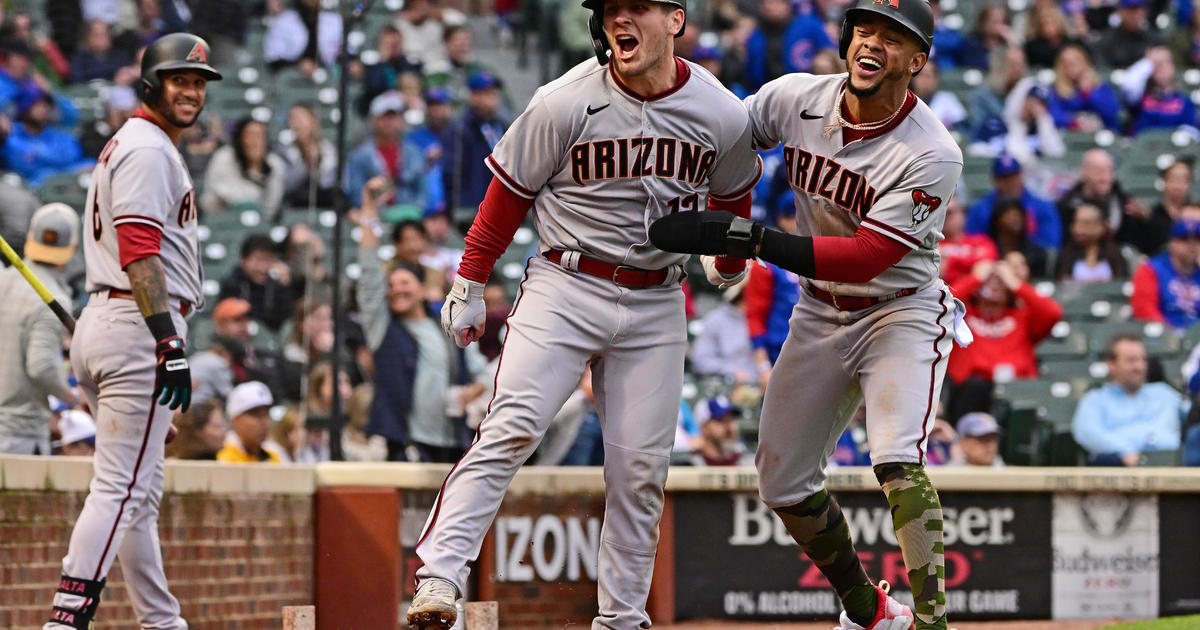 CHICAGO (AP) — Daulton Varsho drilled a two-out, three-RBI double in the 10th inning then scored on a throwing error by Andrelton Simmons to give the Arizona Diamondbacks to a 7-6 comeback win over the Chicago Cubs on Saturday.

Arizona only got one hit off Cubs starter Justin Steele, but came to life against the bullpen, riding a three-run eighth inning into extras. Rowan Wick (1-1) gave up Varsho’s double.

Arizona has won three straight games after ending a six-game losing streak in Thursday’s series opener. Varsho finished 3 of 5 with three RBIs and is second on the Diamondbacks with eight doubles this season.

Diamondbacks relievers Joe Mantiply, J.B. Wendelken, Ian Kennedy (3-2) combined for a pair of scoreless innings before Mark Melancon entered in the 10th for his ninth save of the season.

Against Melancon, Simmons singled to shortstop to score Christopher Morel from second. Simmons moved into scoring position by stealing second with Ian Happ representing the tying run at the plate. Melancon fanned Happ before Jonathan Villar hit his fifth double of the year to score Simmons. But Seiya Suzuki struck out.

Alek Thomas brought Arizona’s bats to life in the seventh with a two-out single to center to score Jake McCarthy. Then Pavin Smith smacked the first pinch-hit homer of his career to center to lead off the eighth, cut the deficit to two runs and end Chicago reliever Scott Effross’ streak of 14 appearances without an earned run.

McCarthy then doubled off David Robertson with two outs, scoring Ketel Marte to close the gap further before Varsho’s single to center brought McCarthy home to tie it at four.

Ian Happ led off the bottom of the eighth by outrunning the Arizona infield for a pinch-hit single. Villar singled to left to move Happ into scoring position, but Arizona reliever J.B. Wendelken fanned Yan Gomes to escape the inning.

Robertson wiggled his way out of a bases loaded, no-out situation in the ninth.

Steele threw five scoreless innings and fanned nine, coming up one strikeout short of matching his career high. He allowed one hit and walked two.

Willson Contreras singled, stole a base, then left the game in the third inning, appearing to grab his hamstring after taking off toward third as Seiya Suzuki belted a grounder just foul.

Chicago has lost four straight after winning six of eight before Arizona came to town.

Diamondbacks: 3B Josh Rojas left the game with a left hand contusion he sustained while striking out in the first inning, one day after a three-home run outing. … Varsho moved back to catcher from designated hitter as Arizona continues to rotate catchers with Carson Kelly (toe fracture) and Jose Herrera (undisclosed) on the 10-Day-IL. … Jordan Luplow moved to designated hitter and Ketel Marte started at second base after off days on Friday.

Cubs: IF Nico Hoerner (ankle) looked to be “about 80%, 85%” while running the bases on Saturday for the first time since his injury, manager David Ross said. … LHP Sean Newcomb (ankle) threw a bullpen session and is eligible to return from the 15-day IL on Monday. … IF David Bote (shoulder surgery) is 1 of 6 at the plate two games into a rehab assignment with Triple-A Iowa. Bote and Clint Frazier (appendicitis) are both “working their way back in,” Ross said, and he won’t rush either player back.

Arizona RHP Merrill Kelly (3-2, 3.27 ERA) is set to face Chicago LHP Wade Miley (1-0, 2.70 ERA) in Sunday afternoon’s series finale. Kelly will look to bounce back after a May 17 start against the Los Angeles Dodgers in which he gave up eight earned runs on five hits in two innings. Miley allowed one hit and struck out six in seven scoreless innings in a May 16 win over the Pittsburgh Pirates.