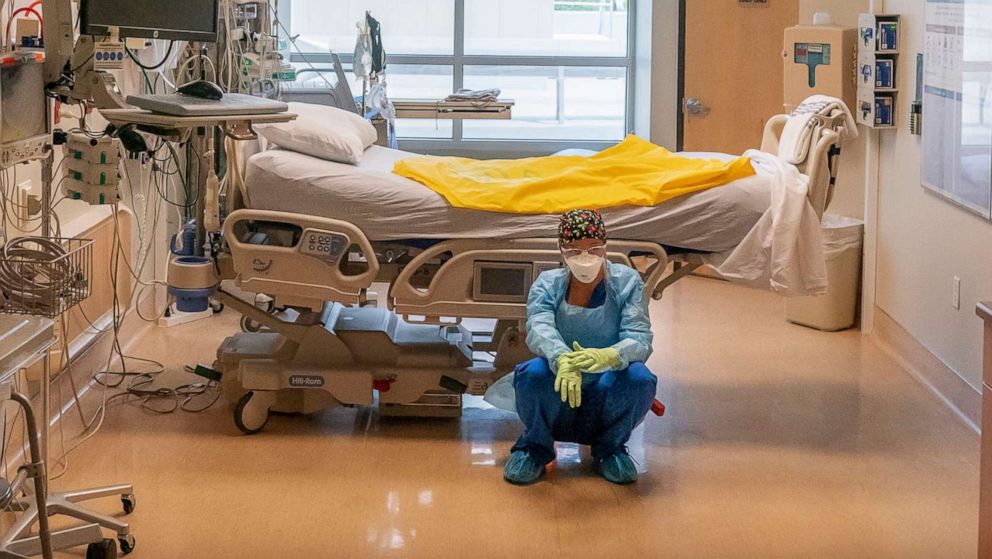 What was once unthinkable — is now a reality.

One million Americans have now died from the coronavirus, according to an announcement made Thursday by President Joe Biden, marking a long-dreaded milestone for an incomprehensible tragedy.

“Today, we mark a tragic milestone: one million American lives lost to COVID-19. One million empty chairs around the dinner table. Each an irreplaceable loss. Each leaving behind a family, a community, and a nation forever changed because of this pandemic. Jill and I pray for each of them,” Biden said in a statement. “As a nation, we must not grow numb to such sorrow. To heal, we must remember.”

The president plans to order flags to half-staff in remembrance.

Over the last two years, the deadly virus has kept the nation tightly in its clutch, with wave after wave of the virus washing over with only relatively brief respites in between.

“This unthinkable tragedy will forever appear in the history books,” said John Brownstein, Ph.D. an epidemiologist at Boston Children’s Hospital and an ABC News contributor.

The loss of 1 million lives is a reality that is still difficult for many to comprehend, and to accept. In some respects, the death toll remains hidden from view.

Experts said the statistic, however massive, does not fully capture the magnitude of the human tragedy.

“It’s one thing to talk about numbers, but then to realize that each one of those numbers represents a grandparent or a spouse or someone with their own unique story that we’ve lost. Already over a million of those stories in you know, in this country alone — it really is a tragedy and a tragedy, in many ways, of unprecedented proportions,” Dr. David Dowdy, an infectious disease epidemiologist at Johns Hopkins Bloomberg School of Public Health, told ABC News.

But the impact of the deaths extends far beyond the total number of deaths. An analysis published by the Proceedings of the National Academy of Sciences estimated that 9 million family members — mothers, fathers, grandparents, siblings, and children — may be grieving the loss of a loved one killed by the virus.

“It’s a very sad and tragic landmark to reach the point of a million deaths in this really extraordinary experience that we’ve all gone through over the last two and a half years,” Dr. Anthony Fauci, the nation’s top infectious disease expert, told GBH News’s “Boston Public Radio.” “Hopefully, the enormity of that number would spur us on to do whatever we can to make sure that we don’t have as bad a time in the coming months and years.”

Making sense of the numbers

The staggering number of deaths due to COVID-19 is now equivalent to the population of San Jose, California — the tenth largest city in the U.S.

“If you were to tell people that an American city had been wiped off the face of the earth, people would be shocked and horrified. But since this has been a kind of a gradual burn over two years, we’ve gotten so used to hearing the headlines and so tired of having to deal with a pandemic. That sense of horror and devastation has been lost,” Dowdy said.

COVID-19 was the third leading cause of death in the U.S. in 2021, following heart disease and cancer, according to new data from the Centers for Disease Control and Prevention.

Racial and ethnic minorities in the country have also faced increased risk of testing positive, requiring hospitalization and dying from COVID-19. According to federal data, adjusted for age and population, the likelihood of death because of COVID-19 for Black, Asian, Latino and Native American people is one to two times higher than white people.

Many experts believe that the current COVID-19 death count could already be greatly undercounted, due to inconsistent reporting by states and localities, and the exclusion of excess deaths, a measure of how many lives have been lost beyond what would be expected if the pandemic had not occurred.

A recent report from the World Health Organization also found that globally, estimates show there were nearly 15 million excess deaths associated with the COVID-19 pandemic in 2020 and 2021 — more than double the official global death toll count of 6.2 million confirmed virus-related deaths.

It has been more than two years since Pamela Addison lost her husband, Martin, a healthcare worker, to COVID-19, in the very early days of the pandemic in April 2020, but the grief is still raw.

“The day he died, I was stunned and in shock, and I was thrown into this new life,” Addison said. “I know that [my two young kids] were going to miss a lifetime of moments with their dad.”

After the loss of her husband, the 38-year-old New Jersey teacher found herself a single mother to the couple’s two young children, Elsie, then 2, and Graeme, then 5 months old, overnight.

Martin, a speech pathologist at St. Joseph’s University Medical Center in Paterson, New Jersey, was just 44 when he became ill with the virus in late March of 2020. Within a matter of weeks, Martin was hospitalized and on a ventilator, and despite numerous interventions and efforts, Martin succumbed to the virus just over a month after he developed his first symptoms.

“Knowing that I wasn’t there when my husband died, I never saw him again after he left that door … that’s something that I will carry with me forever,” Addison said. “I said goodbye on FaceTime and I didn’t even know it was going to be the last time I loved him… I wasn’t able to have a funeral for my husband, and I really don’t feel like people understand just how difficult it is to grieve.”

The loss has deeply impacted the couple’s two young children, who still frequently talk about their father and their longing to hug them.

“I felt so unprepared to make [my daughter’s] pain go away,” Addison said.

A few months after the death of her husband, in an effort to find a community of others who could be experiencing the same grief as she had, Addison founded the Young Widows and Widowers of COVID-19 on Facebook, which now includes hundreds of members.

“When I lost Martin, it was this sense of loneliness,” Addison explained. “Knowing that other people experienced that same sort of inability to be there with their loved one … it gives me some comfort to know that I’m not alone… there are so many people grieving a loss to COVID-19.”

In the early days of the pandemic, former President Donald Trump predicted that the U.S. COVID-19 death toll would be “substantially” lower than the initial forecasts suggested.

Similarly, at the onset of the pandemic, Dr. Fauci, himself, in his most pessimistic scenario, did not envision the possibility that the number of Americans dead from the virus could ultimately be so staggeringly high, telling CNN in late March 2020 that preparing for 1 million to 2 million Americans to die from the coronavirus is “almost certainly off the chart.”

The uncertainty of the federal response in the early days of the pandemic has come under repeated scrutiny from public health experts, who say more should have been done to keep the virus at bay.

“To imagine where we were just over two years ago, we lacked the clarity, the preparation and really the political will to properly respond to a viral threat that would bring the world to its knees,” said Brownstein.

On average, more than 300 Americans still dying of COVID-19 every day

Although COVID-19 death rates are significantly lower than they were in the winter of 2021, when more than an average of 3,400 Americans were dying from the virus every day, the death toll is still averaging more than 300 a day, according to federal data.

“We would not tolerate that sort of burden or mortality from a preventable disease in any other situation, and we shouldn’t be tolerating that for COVID-19 either — just because we’ve been dealing with this for a long time,” Dowdy said.

Since the onset of the pandemic, older Americans have largely borne the brunt of the COVID-19 deaths, despite having higher vaccination rates than the overall population. Overall, people over the age of 65 years old account for more than three-quarters of virus-related deaths in the U.S, according to federal data.

More than 90% of seniors have been fully vaccinated, and about two-thirds have received their first booster shot. However, despite high vaccination rates in older populations, in recent months, during the omicron surge, 73% of deaths have been among those 65 and older.

There has also been an increasing rate of breakthrough deaths among the vaccinated, an ABC News analysis of federal data shows.

In August of 2021, about 18.9% of COVID-19 deaths were occurring among the vaccinated. Six months later, in February 2022, that proportional percent of deaths had increased to more than 40%.

Comparatively, in September 2021, just 1.1% of COVID-19 deaths were occurring among Americans who had been fully vaccinated and boosted with their first dose. By February 2022, that percentage of deaths had increased to about 25%.

Health experts said that the risk to the elderly population and waning immunity re-emphasizes the urgency of boosting older Americans and high-risk Americans with additional doses. And it brings into focus once again the deeply political battle over vaccines.

“Even as we hit this unthinkable milestone, the country is still massively divided on the reality of this pandemic and the tools we have to combat it. Not only do these safe and effective vaccines remain hotly debated but so do masks, a non-invasive tool widely recognized as basic personal protection,” said Brownstein.