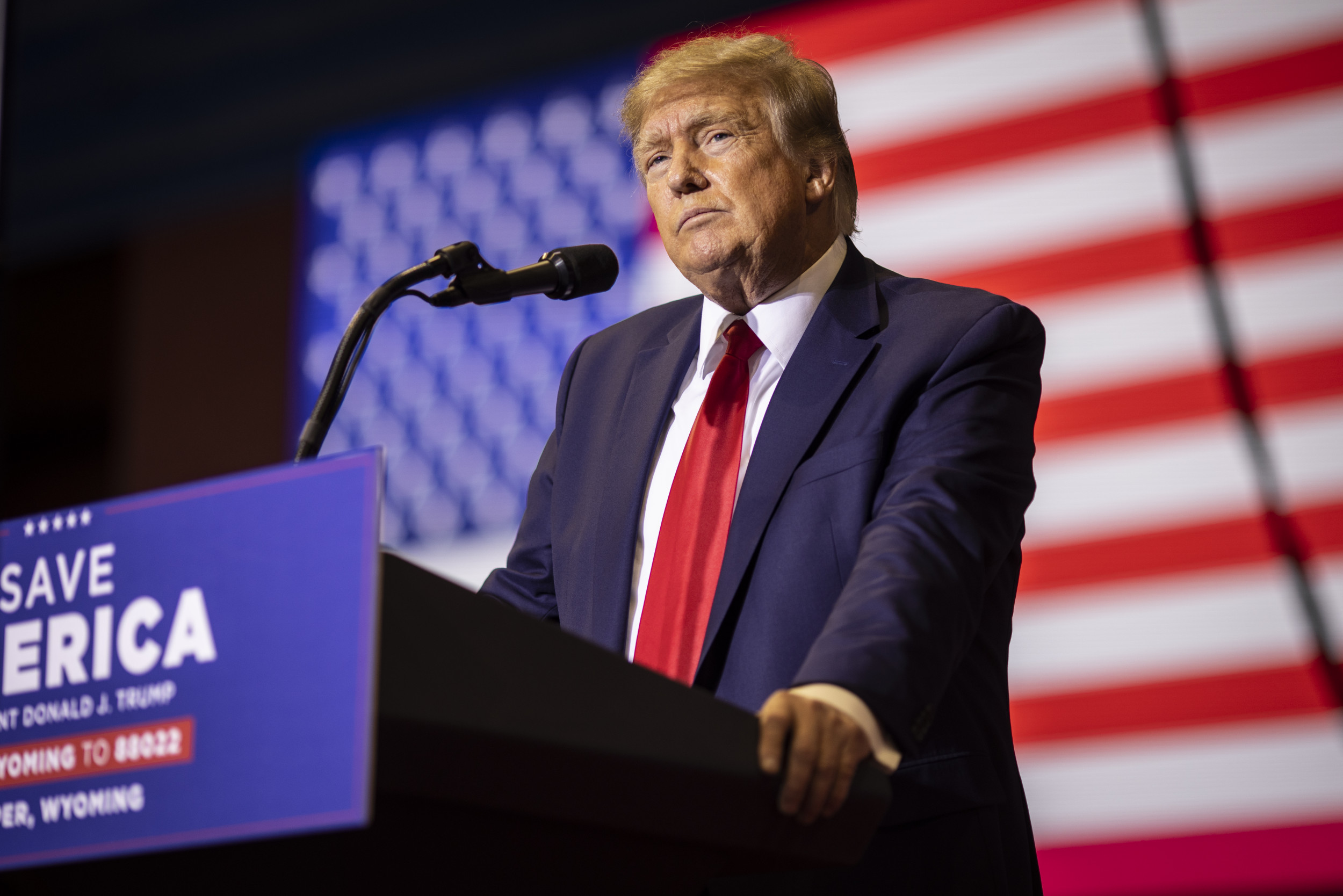 Trump targeted the congresswoman at a rally at the Ford Wyoming Center in Casper on Saturday to support Cheney’s primary challenger and his endorsed candidate Harriet Hageman.

Cheney has been a frequent target of Trump’s since she voted to impeach him following the January 6 attack on U.S. Capitol in 2021. She also serves as vice chair on the House select committee investigating the events of that day.

“She’s the face of the Washington swamp and the same failed foreign policy of the Clintons, Bushes, the Obamas, the Bidens, and the entire sick political establishment,” Trump told the crowd as they booed.

He then turned to look up at a screen, where the edited image of Cheney with former President Bush’s face appeared. “I think she looks good. She looks nice,” Trump said, eliciting laughter from the crowd.

“But Liz Cheney is about America last,” he went on. “It’s time you finally had a representative who will put America first and who’s looking to make America great again.”

He also told rally-goers that Russia’s war on Ukraine could turn into World War III, and said it “would be like no other” due to “renovated and brand new nuclear weapons.”

Saturday’s rally is not the first time Trump has circulated the composite image of Bush and Cheney, whose father Dick Cheney served as Bush’s vice president.

It has been circulated by Trump’s Save America PAC in emails to supporters and shared on Twitter by his spokeswoman Liz Harrington. Harrington tweeted screenshot from Save America PAC with the caption “ICYMI: Must-See Photo” in September 2021.

On Saturday, Trump headed to Wyoming to campaign against one of his most vocal Republican critics, days after his endorsed candidates in Georgia’s GOP primary races failed to unseat incumbents who drew his ire after refusing to go along with efforts to overturn Joe Biden’s win in the 2020 election.

Although little polling has been conducted in Wyoming to gauge Cheney’s chances, the data that has emerged shows the congresswoman faces an uphill battle to retain her House seat representing Wyoming, where Trump remains popular.

Cheney has repeatedly criticized Trump for his baseless claims that the 2020 election was stolen from him. The criticism cost her politically—she was ousted from her position as House GOP Conference chair and replaced by Trump ally Elise Stefanik in 2021.