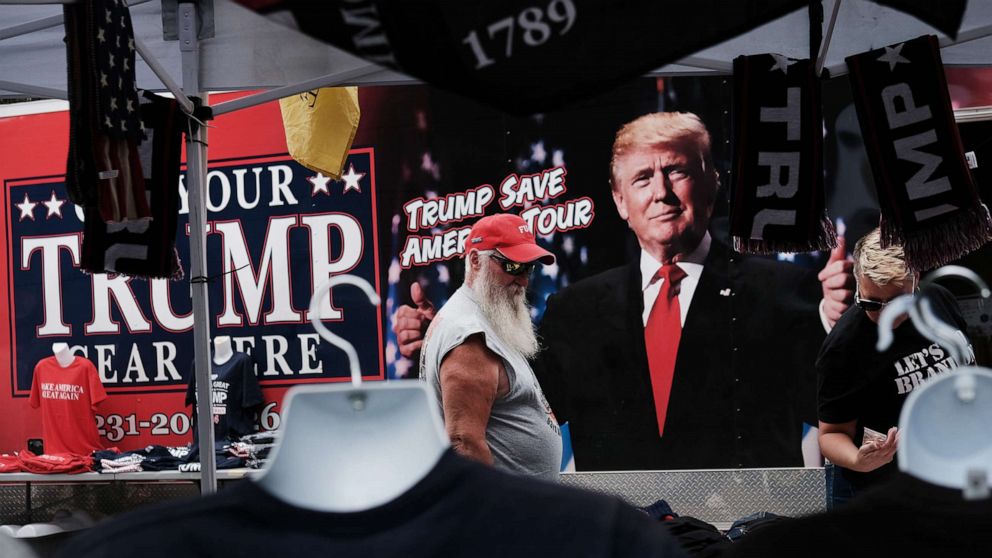 Former President Donald Trump is campaigning for Republicans in Wilkes-Barre, Pennsylvania, on Saturday in what will be his first rally since federal agents searched his Florida home last month.

Trump will speak at the Mohegan Sun Arena in support of Doug Mastriano, who is running for governor against Pennsylvania Attorney General Josh Schapiro, and Dr. Mehmet Oz, who is taking on Democratic Lt. Gov. John Fetterman in the U.S. Senate race.

Supporters were lined up in the parking lot hours before Trump is due on stage.

Trump’s appearance in Pennsylvania comes just days after President Joe Biden’s back-to-back visits in the battleground state, during which he condemned Trump and his fellow “MAGA Republicans” as a dominant force in today’s GOP and a threat to American democracy.

“Too much of what’s happening in our country today is not normal,” Biden said in a prime-time speech from Independence Hall in Philadelphia on Thursday. “Donald Trump and the MAGA Republicans represent an extremism that threatens the very foundations of our republic.”

Biden’s ramped up rhetoric comes as he seeks to recast the November elections as a choice between those who want to save the “soul of the nation” or those who he says are a danger to democracy.

Trump supporters waiting in line to see the former president give remarks criticized Biden’s rhetoric and said it has only energized them even more ahead of the midterms. Evy Mecjes, and Debbie Latsha called Biden’s speech “very divisive.”

“We’re now the bad guys. We are the terrorists of the United States of America,” Mecjes said.

Latsha said Biden’s speech showed how “afraid” Democrats were of the power Trump still has over the Republican Party.

“They’re a little afraid of all the people that are rising up and whose eyes are being opened, who are waking up to what’s truly happening in our government,” Latsha said. “So let’s see if we can smash them down a little bit more and divide people a little bit more. I mean, there was nothing unifying about that.”

They defended Trump supporters pointing to school closures during the pandemic and inflation as examples of how Democrats have hurt Americans.

“People are rising up because we’re pissed off about how our government is treating us and you know, President Biden does not speak for the people,” Mecjes remarked.

Biden will be back in Pennsylvania again on Sunday, spending part of his Labor Day weekend in Pittsburgh.

While Republicans have generally been favored to win back control of both chambers of Congress this midterm cycle, recent legislative victories for Democrats and some positive economic news has bolstered Democrats’ chances to keep their majorities.

Amid these high stakes, Trump’s rally also comes as fallout continues from the Aug. 8 FBI search at his Mar-a-Lago estate, where agents recovered classified documents as part of an investigation into his handling of presidential records after leaving office.

Lawyers for the Justice Department and for Trump faced off in court Thursday over whether there should be a judge-ordered independent review of the Mar-a-Lago documents by a special master. The judge, Aileen Cannon, has yet to make a ruling on the matter.

On Friday, Judge Cannon unsealed a detailed inventory showing what the FBI seized during the search. The list states some documents bearing classification markings ranging from confidential to top secret were found intermingled with newspaper clippings, photographs and other documents.

The inventory also revealed the government seized dozens of folders that were empty but either had “CLASSIFIED” banners on them or were labeled “Return to Staff Secretary/Military Aide.”

Trump has denied wrongdoing as he publicly fights back against the search.

Those in line to hear him speak on Saturday expressed beliefs that Trump was unfairly targeted.

“I don’t feel he did anything wrong. I think that will come out in the end, but they just want to turn people against Trump,” said Barbara, a voter from Mountain Top, Pennsylvania.