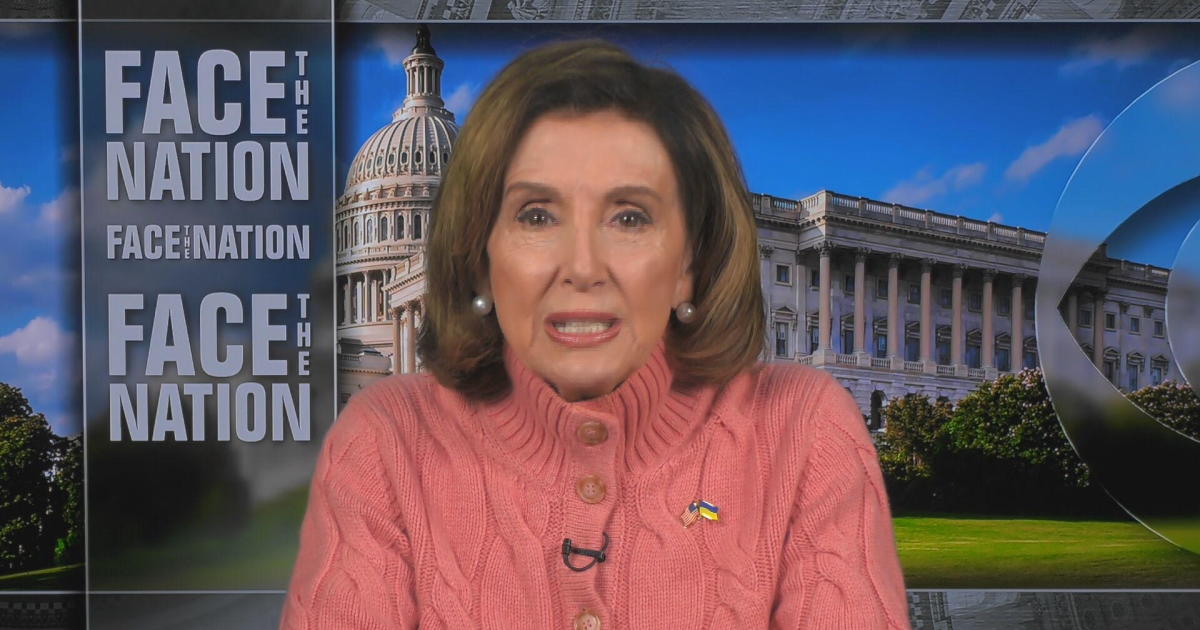 The following is a transcript of an interview with House Speaker Nancy Pelosi that aired Sunday, May 8, 2022, on “Face the Nation.”

MARGARET BRENNAN: And we go to the top Democrat in Congress, House Speaker Nancy Pelosi who joins us this Mother’s Day from San Francisco. Happy Mother’s Day to you, Madam Speaker.

MARGARET BRENNAN: Thank you. And before we get to abortion, we did have this surprise visit on Mother’s Day by the First Lady, Dr. Jill Biden, to Ukraine. Last Sunday, you were in Kyiv meeting with Ukraine’s president. How quickly can Congress deliver this 33 billion dollars in aid that has been promised?

SPEAKER PELOSI: I think we will be able to do it as quickly as possible. We have great bipartisanship in terms of our support for the fight for democracy that the people of Ukraine are making. We have respect for the strategy of the president of Ukraine, and we have a recognition of the need for weapons, for sanct- more weapons, more sanctions, more economic assistance and more humanitarian assistance. I was very proud to be there with my colleagues to talk about those very specific issues and our bipartisan support for them.

MARGARET BRENNAN: And you think you can get that done before the end of the month?

SPEAKER PELOSI: I think we have to.

SPEAKER PELOSI: Yeah, I think we have to. The- the specificity with which we discuss these matters with the president- president of- of Ukraine, the connection that we have with the ambassador, whom you will have on the show later, we’re very current on the needs and the urgency. And again, we will have bipartisanship as we go forward with it.

MARGARET BRENNAN: Okay. Madame Speaker, I want to talk to you, of course, about abortion. California’s Governor, Gavin Newsom, said Democrats have failed to target Republicans on this issue. Here’s what he had to say:

GAVIN NEWSOM: Where is the Democratic Party? Where’s the party? Why are we calling this out? This is a concerted, coordinated effort. And yes, they’re winning. We need to stand up. Where’s the counteroffensive?

SPEAKER PELOSI: I have- I have no idea. The fact is that we have been fighting for a woman’s right to choose, and that is to choose. We have been fighting against the Republicans in the Congress constantly because the fact is there- and not just anti-woman’s right to choose in terms of terminating a pregnancy, but in terms of access to contraception and family planning and the rest, both domestically and globally. This is a constant fight that we’ve had for generations, decades, I should say in my case in the Congress and the- we had been bipartisan early on, support for a woman’s right to choose until the politics have changed. And that’s what happened with the court. The science hasn’t changed. They but the court changed. And therefore, they’re deciding that it will be different. I have no idea why anybody would make that statement unless they were unaware of the fight that has been going on.

MARGARET BRENNAN: Well, you have been fighting for decades on this issue. But back when Democrats held majorities in the House and the Senate 2009, when you were Speaker, President Obama was asked about codifying Roe versus Wade and said abortion is a moral and ethical issue and, quote, not the highest legislative priority. Do you think it was a mistake for him, for other presidents, not to push harder when Democrats had the majority?

SPEAKER PELOSI: If I just may, the focus we have right now is an urgent one in order to try to improve- and try to improve this whether we’re calling it fake or draft decision, whatever it is, I think that this is a waste of time. The fact is, in ’09, we really did not have a pro-choice Democratic Party. I had to fight against some of the people who did not want to pass the Affordable Care Act because they were concerned that it might enable more freedom of choice. It really didn’t go down that path. Right now, we do have a pro-choice Democratic Congress and we passed the law a month ago in last I think September–

MARGARET BRENNAN: –You did in the House–

SPEAKER PELOSI: –It’s been a while, it’s- a number of votes.

MARGARET BRENNAN: But the votes aren’t there in the Senate.

SPEAKER PELOSI: Well, the Senate is- you’ll have to talk to the Senate about the Senate. But I do think that it puts an urgency on what’s happening in the election. Two more- one or two more senators could sweep back the filibuster rule for this purpose, and then women would have a right to choose. This is about something so serious and so personal and so disrespectful of women. Here we are on Mother’s Day, a week where the court has slapped women in the face in terms of disrespect for their judgments about the size and timing of their families. So, the fact is, let’s keep our eye on the ball. The ball is in the court of those justices. One of them at least said over and over again that precedent- that president has been established again and again on Roe v Wade and that- so this decision is about being anti-precedent and anti-privacy and has serious ramifications as we go- as we go down this path and has to be softened. And I don’t think there’s a good outcome, but there’s a better outcome as far as this is concerned.

SPEAKER PELOSI: Let’s just be prayerful about this. This is- this is about respect for privacy. What’s next? What’s next? Marriage equality? What’s next, contraception?

MARGARET BRENNAN: The things you think might be next. Do you need to legislate to enshrine those in law right now to protect them? If you think the court may overturn.

SPEAKER PELOSI: What is really interesting, Margaret, about this is for decades I’ve been trying to say to my Republican friends and women who care about a woman’s right to choose, who contribute to Planned Parenthood and all of those organizations, you can’t do that and expect. You’ve got to weigh in with your own party on this. Barbara Bush, early on, Republicans were very much about family planning and respect for women. So, the so the thing is, is that most people always thought that this debate in the Congress was about the termination of a pregnancy, but it wasn’t. My Republican colleagues have said to me on occasion, we’re not for any family planning domestically or globally, because I was trying to get them to support us on some global family planning issues. We’re not for any of it. And most people don’t know that. And we would be you know; this is a fact. This is a fact. That’s what they believe.

MARGARET BRENNAN: But given the urgency of with which you’re speaking, the Reproductive Choice Act to pro-abortion rights Republicans in the Senate, Susan Collins, and Lisa Murkowski. put that forward. Leader Schumer says it’s not even worth putting to a vote. But when you do have Republicans interested in working together, is that a strategic mistake? You say this is an emergency.

SPEAKER PELOSI: Well, it depends on what the legislation is and what the impact that it has on women’s lives. The- the enshrinement of Roe v. Wade into the law is the way in order to protect a woman’s right to choose. I don’t know why they say they’re for that and can’t be for this legislation. Should we all have a discussion and find our common ground? Always, always. But this year, either for the enshrinement of Roe v Wade, or you’re not. It’s the law of the land. 50 or nearly 50 years of the precedents- precedents of it has been reaffirmed, what, 14 times. And just because there has been- the Republicans were very clear when they had a presidential campaign that their campaign was to elect a president who would appoint judges, who would vote to overturn Roe v Wade. It didn’t say the science would change. And one more point in that regard. Mitch McConnell pulled back the filibuster rule in order to have those justices confirmed by 51 by not needing 60 votes by 51. So, this is a political decision on the part of this- the rule of law in our country should be respected. Women should be respected to make their own judgments with their family, their doctor, their God.

MARGARET BRENNAN: Speaker Pelosi, thank you for your time this morning. FACE THE NATION. I’ll be back in a minute. Stay with us.