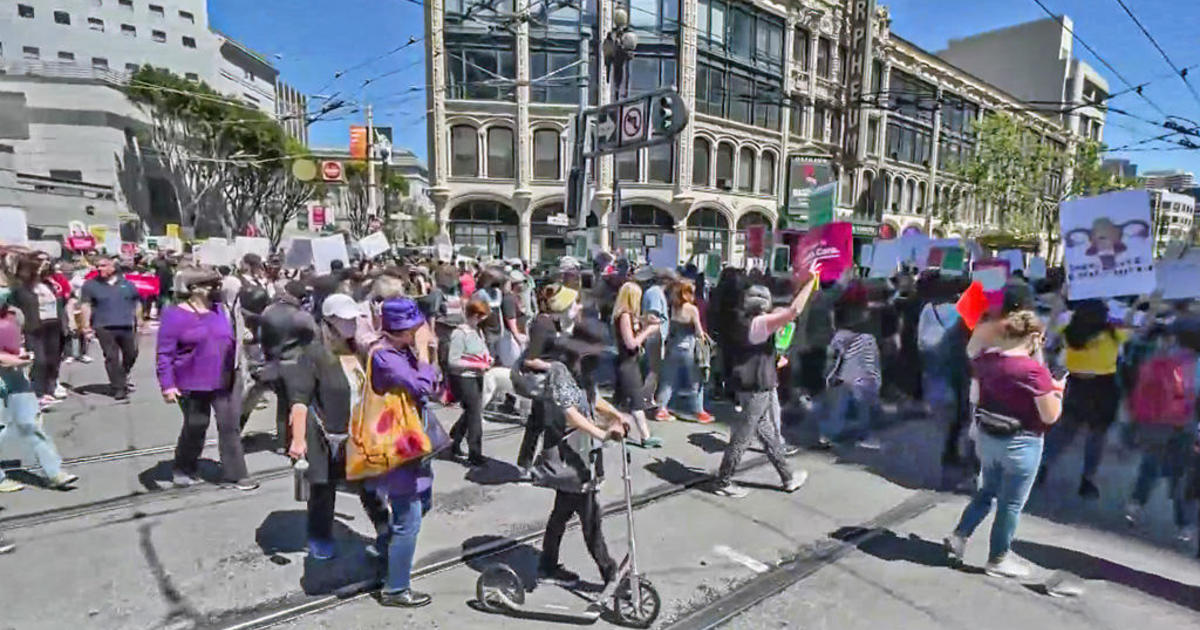 SAN FRANCISCO (CBS SF) — Thousands of people marched and rallied in San Francisco in support of reproductive rights and a San Mateo County supervisor issued a statement in favor of pro-choice sanctuaries Saturday.

The actions were in response to the leak earlier this month of a draft opinion from the Supreme Court that would overturn the landmark 1973 abortion ruling Roe v. Wade.

Ever since the leak, activists in the Bay Area have been responding with a variety of actions on both sides of the issue.

There have been marches over abortion before — both pro and con — but Saturday’s was larger than most as Bay Area abortion-rights advocates joined a nationwide protest.

“It’s huge and we’re thrilled,” said Ruth Robertson with the Raging Grannies Action League. “And it’s not just East Coast, it’s Chicago, it’s Texas, and it’s in little towns and big cities and San Francisco had to be a part of this. There’s no way San Francisco would not be a big part of it and we are a big part of it.”

“Enough is enough! We’ve gotten comfortable,” said Tyleigha Hagood to the crowd assembled at the Civic Center Main Library. The organizer with the National Reproductive Justice said everyone needs to be realistic about the direction the Court is heading.

“I think people need to start accepting the hard truth of realizing that this leak is the Supreme Court justices’ decision,” she said. “We can still fight, we can still act up, we can still make a ruckus in the streets but doing that with the realization that they have made their decision — that this is where they stand — will empower the people a lot more.”

With that, thousands marched from Civic Center onto Market Street, heading to the waterfront. Among them was Janice Campbell from Oakland, who said that, while the argument over abortion hasn’t ended, she thought it had been decided as a matter of law.

“I was in law school when it was settled,” she said, “and we all assumed it would just last forever but we didn’t think that religious fanatics would take over the Court and our way of life would be destroyed.”

Those old enough to remember when Roe v. Wade was established in 1973 understand how contentious the issue was and has been ever since.

“I feel like we’ve been fighting for the past 50 years to keep it,” said Katherine Wilson of Palo Alto. “I feel like it’s been threatened for a long time.”

Younger women, like S.F. resident Kaci Barry, have grown up with the idea of abortion as a constitutional right and are now facing the prospect that that may no longer be true.

“I can’t believe in 2022 that we’re marching for abortion rights,” Barry said. “As I grew up that was something that was protected and something that I knew I had access to and to know that it’s now threatened for me and our children and our granddaughters is horrifying.”

Some are advocating for a federal law that would legalize abortion nationally. A recent CBS poll showed that 58 percent of Americans favor that idea, while 42 percent oppose it.

By design, the Supreme Court is the one branch of government that is not supposed to be affected by public opinion. So how much influence can mass protest marches have?

San Francisco resident Angela A. thinks it won’t change any justice’s opinion but she feels that, if people become more politically active, they can influence future court appointments, even if the process seems agonizingly slow to some.

“They’re getting their way. Republicans have been planning this for decades,” she said. “They’re winning right now but that doesn’t mean it has to be forever. They can win this battle. Eventually we could go back to what it should be and we could win the war.”

“With a continuing assault on women’s reproductive rights, we need to create ‘Pro Choice Sanctuaries’ and ‘Buffer Zones’ at abortion clinics to protect the privacy and rights of the women who are seeking reproductive patient care, even if they are coming from out of state,” Canepa said.

Canepa said he felt the county should work with cities to create buffer zones at every health care clinic in the county that provides reproductive health care.

“We’ve seen an uptick of protests at clinics such as the Planned Parenthood located on 2907 El Camino Real on the edge of Redwood City. Therefore, I agree with the Redwood City Council that the county should create a buffer zone,” the supervisor said.

“No woman should be in fear of caring for her own body by seeking health care at these clinics,” Canepa said.