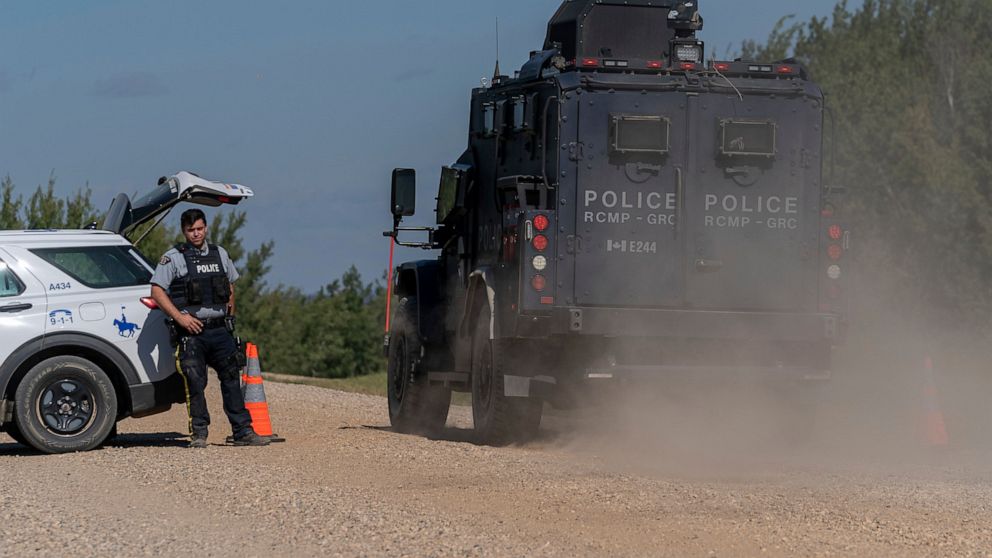 JAMES SMITH CREE NATION, Saskatchewan — As a Canadian Indigenous community comes to grips with a deadly stabbing rampage by two of its own, many blamed rampant drug and alcohol use on the reserve that they linked to repeated failures by the government over many years.

One of the alleged attackers, Myles Sanderson, has 59 criminal convictions, according to parole documents. He’d been serving a sentence of four years and four months on charges that included assault with a weapon, assault on a peace officer and robbery when he was released.

Public Safety Minister Mendicino said he’s been told by the parole board there will be an investigation into its assessment of Myles Sanderson.

“I want the know the reasons behind the decision” to release him, he said. “I’m extremely concerned with what occurred here.”

Many of his past crimes happened when he was intoxicated, and he told parole officials substance use made him out of his mind. He had been sought for a parole violation since May.

“The drug problem and the alcohol problem on these reserves is way out of hand,” said Ivor Wayne Burns, whose sister was killed in the weekend attacks. “We have dead people and we asked before for something to be done.”

Sanderson, 32, and his brother Damien, are accused of killing 10 people and wounding 18 others in the attacks that spread across the rural reserve and into the nearby town of Regina. Damien’s body was found Monday near the attacks, and police were investigating whether his brother killed him.

The reserve, population of about 1,900, gets its name from its chief, who signed an agreement over lands with the Canadian Crown and other tribes in 1876, according to its website. More tribal members live off the reserve, for about 3,400 members total.

Like many Canadian Indigenous communities, it has been scarred by a dark history.

From the 19th century until the 1970s, more than 150,000 native children in Canada were ripped from their families and placed in government-funded Christian residential boarding schools. The aim was to Christianize and assimilate them into mainstream society, which previous Canadian governments considered superior.

Indigenous leaders blame the legacy of abuse and isolation at those schools as a root cause of the epidemic rates of alcohol and drug addiction now on Canadian reservations.

“This is the destruction we face when harmful illegal drugs invade our communities, and we demand all authorities to take direction from the chiefs and councils and their membership to create safer and healthier communities for our people,” said Chief Bobby Cameron of the Federation of Sovereign Indigenous Nations.

The parole board cited the intergenerational impacts of residential schools, saying it may have contributed to Myles Sanderson’s criminal past. It wasn’t clear, though, whether the brothers or family members attended the schools.

His childhood was marked by violence, neglect and substance abuse and led to a “cycle of substance abuse, seeking out negative peers and violent behavior,” the parole documents said. He lived between his father’s home in a city and grandparents’ house on a reserve. There was violence and abuse in both households, it said.

Sanderson started drinking and smoking marijuana at around age 12 to cope with problems, the document said. Cocaine followed soon after.

Parole documents said he barged into his ex-girlfriend’s home in July 2017 while she was with friends, punched a hole in the door of a bathroom while his two children were hiding in a bathtub and threw a cement block at a vehicle parked outside.

He got into a fight a few days later at a store, threatening to kill an employee and burn down his parent’s home, documents said.

That November he threatened an accomplice into robbing a fast food restaurant by hitting him in the head with a firearm and stomping on his head. He then stood watch during the robbery.

In April 2018, he stabbed two men with a fork while drinking and beat someone unconscious.

He got into trouble twice while in prison for having contraband before he was let out in August 2021 on statutory release. But he got into trouble that year and had his release changed for failing to be honest with his parole supervisor about continuing what he acknowledged was a “rocky” relationship with his common law spouse.

But Myles Sanderson said he had “stayed sober, found employment assisting an Elder, arranged for a therapist to deal with domestic violence and other issues.” And in February, the board canceled the suspensions, while adding conditions to limit and monitor contact with his common law spouse and children.

Parole documents also stated he should not enter into relationships — either intimate or non-sexual — with women unless he had prior written permission from his parole officer.

Sanderson received statutory release from prison in the summer of last year. It was revoked after he failed to communicate with his parole supervisor, but the board decided only to reprimand him.

“It is the Board’s opinion that you will not present an undue risk to society if released on statutory release,” it says.

In May, a Crime Stoppers bulletin was issued for Sanderson, warning he was unlawfully at large.

Sharna Sugarman, who was organizing a GoFundMe for the victims, questioned the parole board for releasing him and why Myles Sanderson was still on the loose so many months after he was deemed “unlawfully at large.”

“That’s just egregious to me,” said Sugarman, a counselor who worked in the community in 2010 and 2011 and counted Gloria Lydia Burns as one of her clients. “If they claim that they’ve been looking for him, well you weren’t looking that hard.”

Menicino, Canada’s public safety minister, said he wants “to know if any mistakes were made during the (parole) process.”

“It has to be an independent review,” he said.