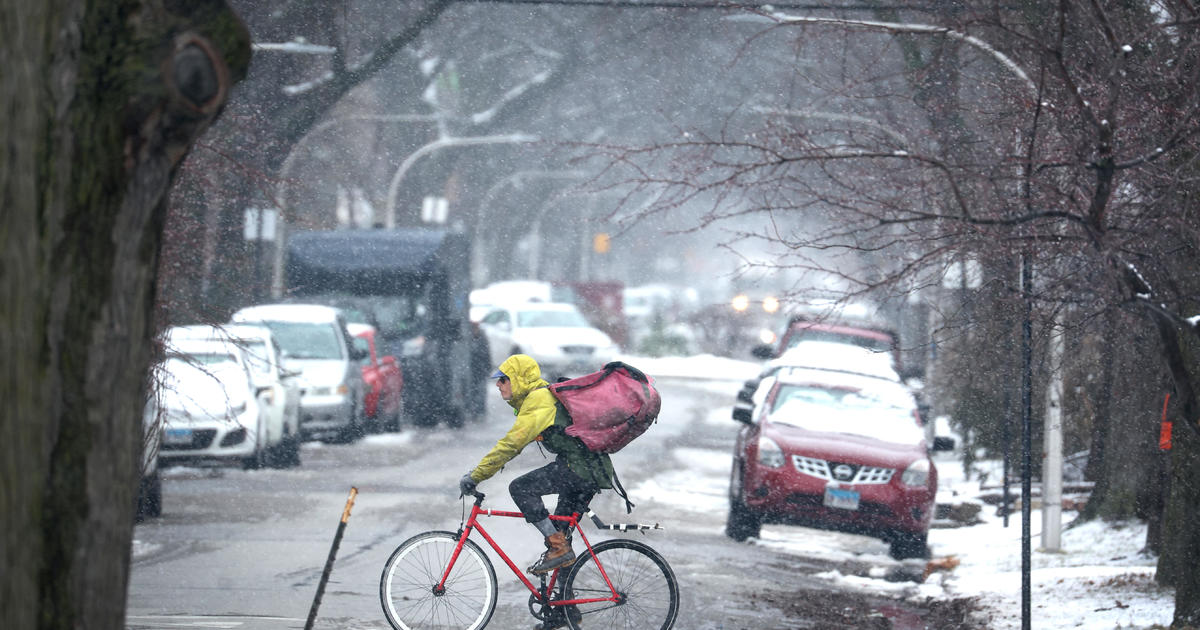 Heavy, wet snow — part of a storm system that spawned tornadoes in the Houston area Tuesday — has covered roads, vehicles, houses and buildings Wednesday from central and northern Indiana into much of southeastern Michigan.

About six inches of snow was expected to fall on the Detroit area, while four inches was reported before noon in eastern Indiana, just southwest of Fort Wayne, said Maddi Johnson of the National Weather Service in northern Indiana.

The storm on Wednesday was expected to bring damaging winds to parts of Florida, Georgia, and the Carolinas, forecasters said. Winter weather advisories stretched from southern Missouri to Maine, with areas of New England expected to see 8 to 12 inches of snow, the National Weather Service said. Missouri Gov. Mike Parson declared a state of emergency due to the weather.

In Michigan, the snow led to several fatal accidents around Kalamazoo.

Fort Wayne, Indiana, has seen numerous crashes due to the snowfall on the roads.

“People are sliding off exit ramps on the highways,” Johnson added. “They’re just driving too fast for the conditions.”

Just north of Indianapolis, some power outages were reported in Hamilton County as the wet snow accumulated on power lines, said meteorologist Gregory Melo with the weather service’s Indianapolis office.

Indianapolis had recorded 2.8 inches by about 11:30 a.m. local time Wednesday, and while the snow was still falling, it was expected to end by early afternoon. Total snowfall amounts were projected to range from 5 to 8 inches to the north and northeast of Indianapolis by mid to late afternoon.

“This is one of the first big snowfalls we’ve had,” said Scott Cabauatan, deputy director of public services in Wayne County, which includes Detroit. “This snowfall poses a concern from the aspect that it’s a wet, heavy snow versus a lighter snow.”

Cabauatan said crews will roughly clear, on one regular pass, just under 5,000 lane miles of roadway.

“We will have right around 100 pieces of equipment and operators working” at any given time to salt and clear roadways of snow and ice, he added.

Snow also is in the forecast for late in the week and over the weekend. “We’re anticipating many days on end of working here and being in the trucks,” Cabauatan said.

Schools and businesses remained closed Wednesday in parts of Oklahoma, which saw snowfall totals of between 1 and 6 inches across central and eastern parts of the state. More than 160,000 homes and businesses were without power Wednesday morning in northern Arkansas and southern Missouri after heavy snow fell in the Ozarks a day earlier.

In Arkansas, a truck jackknifed on a snow-covered road near Fayetteville. The weather also led to power outages, leaving over 100,000 people in the dark.

On Tuesday, forecasters issued a rare tornado emergency for the Houston area as the storm system moved through the heavily populated area. Substantial damage was reported in cities east of Houston, but there were no reports of injuries. One of the tornadoes was confirmed on Wednesday to be a powerful EF3.

In Louisiana, three people suffered “mild to moderate injuries” when their mobile homes were flipped or destroyed after a tornado hit the Morel Lane area north of Baton Rouge, the Pointe Coupee Parish Sheriff’s Office said.

In Texas, several businesses in Pasadena, east of Houston, sustained major damage, including the city’s animal shelter. Rescue groups were able to move dozens of dogs and cats, but many still need homes.