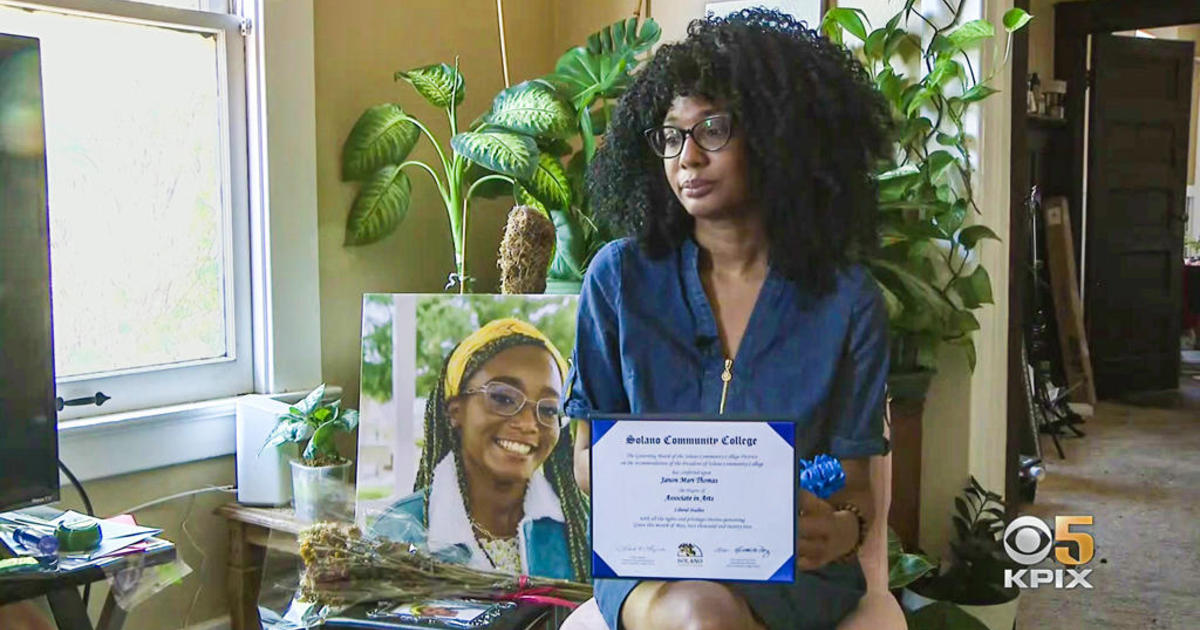 VALLEJO (KPIX) — A young woman in Solano County graduated from college two months after she died. It’s a story that is both heart-wrenching and inspiring and her mother says there is a life lesson in it for all of us.

When Solano Community College held its drive-through commencement in June, one of its graduates was missing. Janon Thomas had died two months earlier. On Saturday, her mother Anekka held her diploma like it was a gift from heaven.

“I got the degree in the mail yesterday and I was like ‘she did it.’ She worked so hard,” Anekka Thomas said.

From a very early age, Janon’s life wasn’t easy. She developed scoliosis and her spine became so twisted it began restricting her breathing. She spent countless days in the hospital, undergoing 43 surgeries but, despite all this (or maybe because of it) Janon kept her perspective.

“She would say, ‘Well, this sucks. I’m not going to say this doesn’t suck but I still get to go to school, I still get to have friends,'” Anekka recalled. “At one time, before it got to be too much, she was even a cheerleader.”

After high school, Janon enrolled at Solano Community College. She wanted to become a pediatric surgical nurse and took online classes, often studying from a hospital bed. She even charmed a Stanford neurosurgeon into helping her with her homework.

Still, her condition worsened as her final semester began.

“I said ‘Janon, that’s not a good idea when you’re having spinal fusion the same day the semester starts,'” Anekka said. “And she goes, ‘I can do it! I can do it!'”

Janon kept at it even though she was never able to take a single in-person class. A few weeks before final exams, tragedy struck.

For no apparent reason, Janon aspirated into her breathing mask one night and it caused a reaction that filled her lungs with fluid.

Three days later at age 22, she died without completing the requirements for her degree in biology.

The school discovered that she did have enough credits for a liberal studies degree so they issued the diploma. It will always be one of her mother’s prized possessions.

Anekka said she didn’t ask to qualify Janon for graduation — the school did that on their own and she said she will always be grateful for that.

It has only been three months since Janon died and Anekka is deeply mourning the loss but she is also grateful for the gift Janon gave her before going: the wisdom to appreciate every day of her life.

“She was literally happy for every breath that she took when she was alive on this earth,” Anekka said. “And so it’s just taught me to cherish life and to live it.”