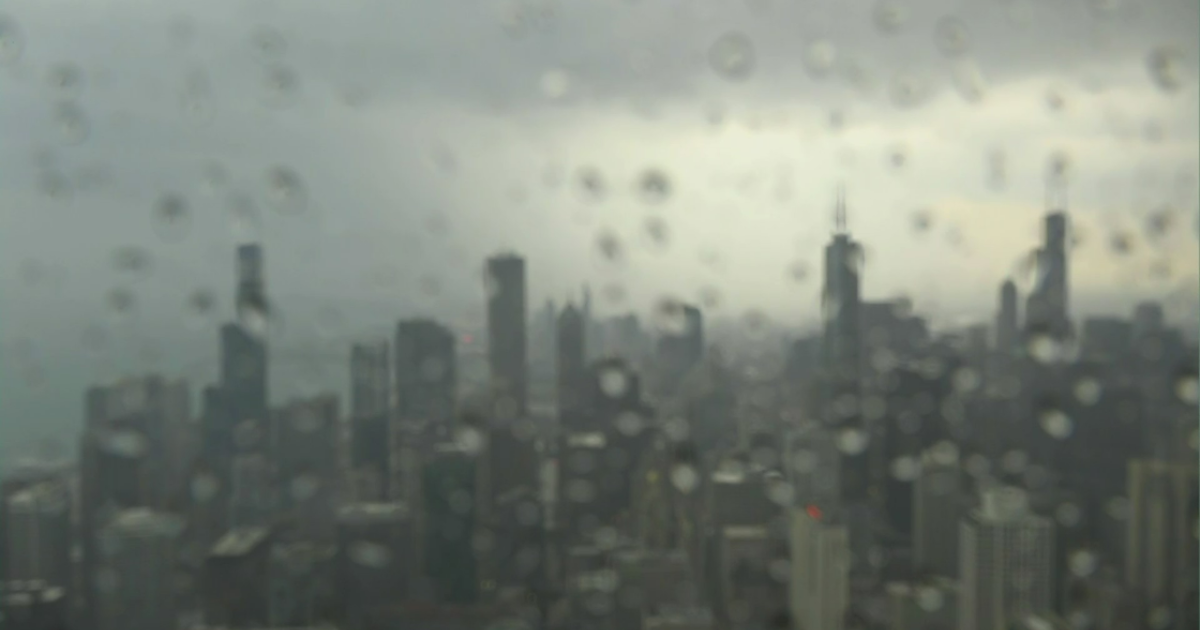 Tornado confirmed to have touched down in Oak Brook

The tornado, with peak winds of 75 mph, left a path length of approximately 1.9 miles witha  maximum width of 60 yards.

It touched down near the Hilton hotel and WIllow Crest Golf Club and ended in Central Park in Oak Brook.

The storm left snapped tree branches and a few uprooted trees. One building also lost part of its roof.

The tornado was on the ground for about three minutes, the NWS said.

An additional tornado also touched down near Timberlane in Boone County, west of McHenry.

Skies were menacing over downtown Chicago as of 8:05 p.m. with lightning flashes in the distance.

In a view from the John Hancock Center, a wall of rain made it so the Willis Tower has been obscured. Soon afterward, virtually the whole skyline was obscured.

The storm system that earlier showed rotation is coming eastward fast, moving through Little Village and Lawndale and into Bridgeport. A hail core was also reported in Beverly.

The storm was arriving in the Loop early in the 8 p.m. hour. The city was being battered by heavy rain, with the South Side hit hardest.

There are no signs of rotation with the system now.

A thunderstorm with minor rotation has now been spotted near Midway International Airport.

The storm system is now over the Stevenson Expressway at Central Avenue. Circulation is also being monitored near Cicero.

The system is moving north and east, which means it is moving closer toward the center of the city.

This does not necessarily mean a tornado warning will be warranted.

Tornado watch extended until 10 p.m. for parts of area


A tornado watch has now been extended until 10 p.m. for Cook, DuPage, Will, and Kankakee counties.


The reason is concern about spin-ups as the storms pass through.


Other parts of the area such as Kane, Kendall, LaSalle, and DeKalb counties have seen their severe weather threat pass.

• The system heading from McHenry County into Lake County for which broad rotation has been reported. This system has not warranted a tornado warning as of now.


• A storm system heading into Chicago’s West Side with the potential for nickel-sized hail and intense wind gusts.


• A system to the south clipping parts of Kankakee County and also affecting Ford and Iroquois counties. It could be trouble later on for Newton and Jasper counties in Indiana.

Severe thunderstorm warning until 9 p.m. for parts of Kankakee County

A severe thunderstorm warning has now been issued until 9 p.m. for southeast Kankakee County, and for Ford and Iroquois counties.

A tornado warning could be issued for that area imminently.

Areas such as Fox Lake and Johnsburg may be affected.

Meanwhile, very heavy rain is moving northeast toward the city and the North Shore suburbs, but this has not warranted a severe thunderstorm warning.

Some rotation has been spotted in the storm system now passing through McHenry County – south of Greenwood and north of Bull Valley.

The rotation is not strong, but we are keeping an eye on it.

Meanwhile, DeKalb and LaSalle counties have been dropped from the tornado watch and the severe weather threat for those areas is over. But the tornado watch remains in effect for Cook, Will, DuPage, Kane, McHenry, Kendall, Grundy, and Kankakee counties. Lake County, Illinois is not included, but the system now hitting north central McHenry County could affect parts of Lake County too.

Downtick in intensity for storm over DuPage

The storm system now passing through DuPage County is experiencing a downtick in intensity.

We are drawing closer to sunset, which is set for around 7:50 p.m., and the atmosphere will be stabilizing a little bit.

The National Weather Service says there is no plan for now to issue a new severe thunderstorm warning for central Cook County.

But all of these forecasts are subject to change.

Rain and rainbows in the western suburbs

In Wheaton, CBS 2 Web Producer Beth Lawrence Bria reports rain was coming down in sheets as of 7:15 p.m. – but a rainbow was seen above.

A second round of severe thunderstorms is expected to pound the Chicago area in the next hour and a half or less.

No rotation has been seen with this thunderstorm, but very strong straightline winds are coming – and could be damaging for Joliet.

Later, Northwest Indiana will be affected.

A tornado watch remains in effect for the majority of the area until 8 p.m. There is no word on whether the National Weather Service will extend the tornado watch, though it may be supplanted with a severe thunderstorm watch. The threat of damaging straightline winds is expected to persist.

On Twitter during the first round of storms, one user documented sirens sounding for a tornado warning in the western suburbs.

Severe thunderstorm warning for Will County, parts of DuPage County

A new severe thunderstorm warning has been issued for much of Will County, including Joliet, Bolingbrook, and Romeoville.

Parts of DuPage County have also now been added.

This severe thunderstorm warning is in place until 7:30 p.m., and it has been deemed “tornado-possible.”

This thunderstorm system is pretty aggressive when it comes to both wind and hail. As of 6:54 p.m., it was over the Plainfield area.

The severe thunderstorm warning for Grundy and Kendall counties has been deemed “tornado-possible” because of the rotation factor that is a possibility with it.

This line of storms is expected to affect southern DuPage County, Will County, and possibly western Cook County if it holds together.

There is no tornado warning associated with this storm system at this time. But based on the potential for rotation, you are advised to prepare as for a possible tornado warning if you are in the affected areas.

The new line of storms is also now expected to hit Midway International Airport at 7:38 p.m.

The trajectory for the next line of storms

There is less of a tornado threat in the next line of storms to come, but there is still a threat of damaging winds and hail.

But while the threat of tornadoes has diminished, it is not over. A tornado watch is still in effect until 8 p.m.

Meanwhile, officials are assessing damage in Rockford, where the first round of storms hit hard. A building collapse has been reported near Broadway and 9th Street in Rockford.

A new severe thunderstorm warning has been issued.

This warning affects all of Kendall and a large chunk of Grundy County until 7:15 p.m.

The system could bring large hail of up to 1 inch in diameter, and wind gusts of up to 60 mph.

The system is moving to the east-northeast at 40 mph.

Damage reports indicate that the first round of storms brought wind gusts of 65 mph in the Plainfield area.

A possible tornado touchdown was reported in Oak Brook, but this has not been confirmed.

Parts of the area, including the city of Chicago and the western suburbs, saw the sun come out after storms passed through early Saturday evening. But this is not good news.

Sunshine builds the air with further instability, and there are more severe weather systems threatening the area.

Just west of Champaign, mid-level rotation was spotted in a storm system. The system overall was moving east, though some cells could head northeast.

Meanwhile, the tornado warning that earlier affected McHenry County has lifted to the north.

CBS 2’s Sabrina Franza reports outside the Hilton Hotel in west suburban Westmont, strong winds ripped through a shack that is used to store port-a-potties. Just roofing and wood remained after the round of storms passed through.

Trees were also down nearby, and Westmont fire crews were on the scene.

It was prom night for an area high school at the hotel Saturday night, and the storms remained a concern early in the evening.

Earlier, Franza spotted a sun shower, flooding in Broadview, and a rainbow on the Eisenhower Expressway as she made her way through the western suburbs in CBS 2’s Mobile Weather Lab.

For the storm cell that has warranted a tornado warning for the northwest corner of McHenry County, rotation was seen just west of Caledonia and moving toward Poplar Grove.

The storm system was expected to cross over North Boone High School at 6:14 p.m.

Meanwhile, the severe thunderstorm cell in LaSalle County was moving northeast at 40 mph and was expected to arrive in Marseilles at 6:12 p.m. We are watching that system very closely for any sign of rotation.

Route 53 shut down for flooding in Glen Ellyn

In Glen Ellyn, Route 53 is closed in both directions at Route 38 due to flooding.

A new tornado warning has been issued until 6:30 p.m. for northwestern McHenry and northern Boone counties.

At 5:45 p.m., a severe thunderstorm capable of producing a tornado was spotted near Timberlane and Belvidere, moving northeast at 30 mph, the National Weather Service reported.

Storms start ‘absolutely out of nowhere’ in western suburbs

CBS 2’s Sabrina Franza reported during the 5 p.m. hour that the rain just started crashing down in Oak Brook all at once. At Oakbrook Center Mall, people rushed to their cars as the downpour began.

In Elmhurst, air-raid sirens sounded warning people of a possible tornado, in connection with the warning that has since expired.

Franza reported the storm seemed to come “absolutely out of nowhere.”

ComEd reported 945 customers were without power at 5 p.m.

A new severe thunderstorm warning has been issued until 6 p.m. for LaSalle County. Dangerous winds are a possibility, though rotation is not being seen.

Multiple rounds of storms passing through

A storm passing through the Chicago area was spotted around Lyons at 5:15 p.m. and was headed northeast toward Edgewater.

Additional storms were developing just west of our viewing area. A severe storm was moving into Rockford around 5:15 p.m. with concerns about rotation.

In the city of Chicago, downpours began around 5:15 p.m.

A tornado warning was issued for parts of Cook and DuPage counties through 5:15 p.m., but was dropped early. There was no confirmation that a tornado touched the ground.