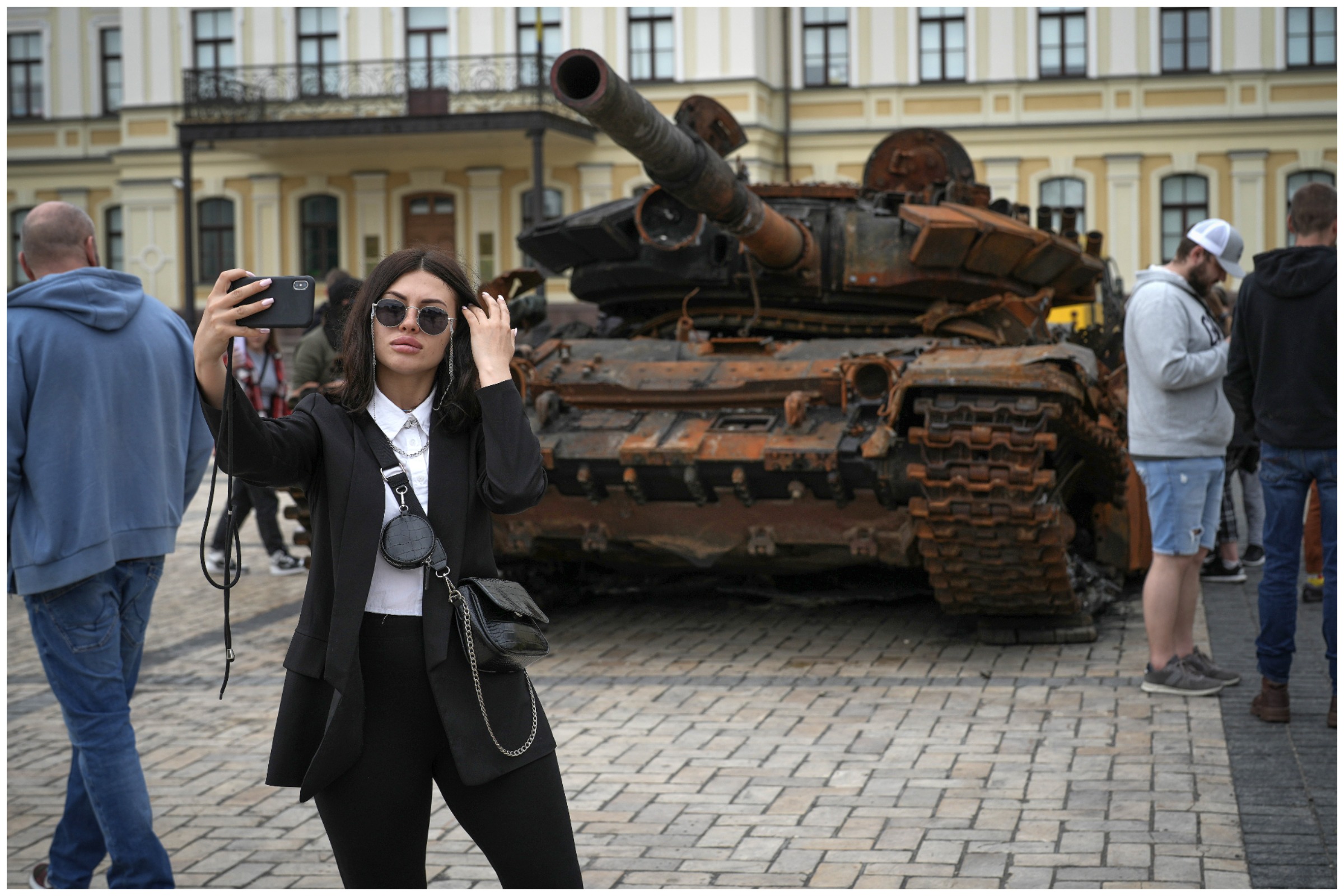 Russian tanks destroyed by Ukrainian fighters have been put on display in Ukraine’s capital Kyiv.

In the first days of the war, Russian tanks were seen in social media footage traveling through Obolonskyi—just 5 miles from central Kyiv.

Bellingcat investigators also geolocated a Russian armored column in March outside Brovary, an eastern suburb of Kyiv, which was Ukrainian forces attacked in an ambush.

They were repelled. Now, the rusted tanks and armored vehicles sit defeated in the city’s central Saint Michaels Square.

Yaroslav Trofimov, The Wall Street Journal‘s chief foreign-affairs correspondent, on Sunday tweeted pictures of people posing with the exhibited tanks. “On day 88 of the war, Russian tanks have finally entered Kyiv,” he noted.

Pictures showed people looking at the tanks, taking photos alongside them and even climbing on top of one of them.

Photos also showed pet goats, named Zita and Myra, had taken an interest in one of the tanks and were seen examining the destroyed vehicle in numerous photos.

Newsweek has contacted the office of the Ukrainian president for comment.

Following Russia’s failed attempts to capture Ukraine, Moscow has shifted the focus of its war to the eastern separatist regions of Luhansk and Donetsk.

While Vladimir Putin’s campaign failed to quickly settle the war and force Ukraine’s government to capitulate, Russian forces have managed to exercise control over the eastern and southern regions of the country.

Control of this territory gives Putin a land bridge to Crimea, a Ukrainian peninsula that was annexed by Russia in 2014.

Meanwhile, Ukrainian President Volodymyr Zelensky has ruled out any ceasefire or peace deal that would see it surrender any of its territories to Russia.

On Saturday, Zelensky said in an address to the nation that the war would end through diplomacy and that Russia’s hold of Ukrainian land was only temporary.

Zelensky’s adviser Mykhailo Podolyak added in an interview with Reuters: “The war will not stop (after concessions. It will just be on pause for some time. They’ll start a new offensive, even more, bloody and large-scale.”