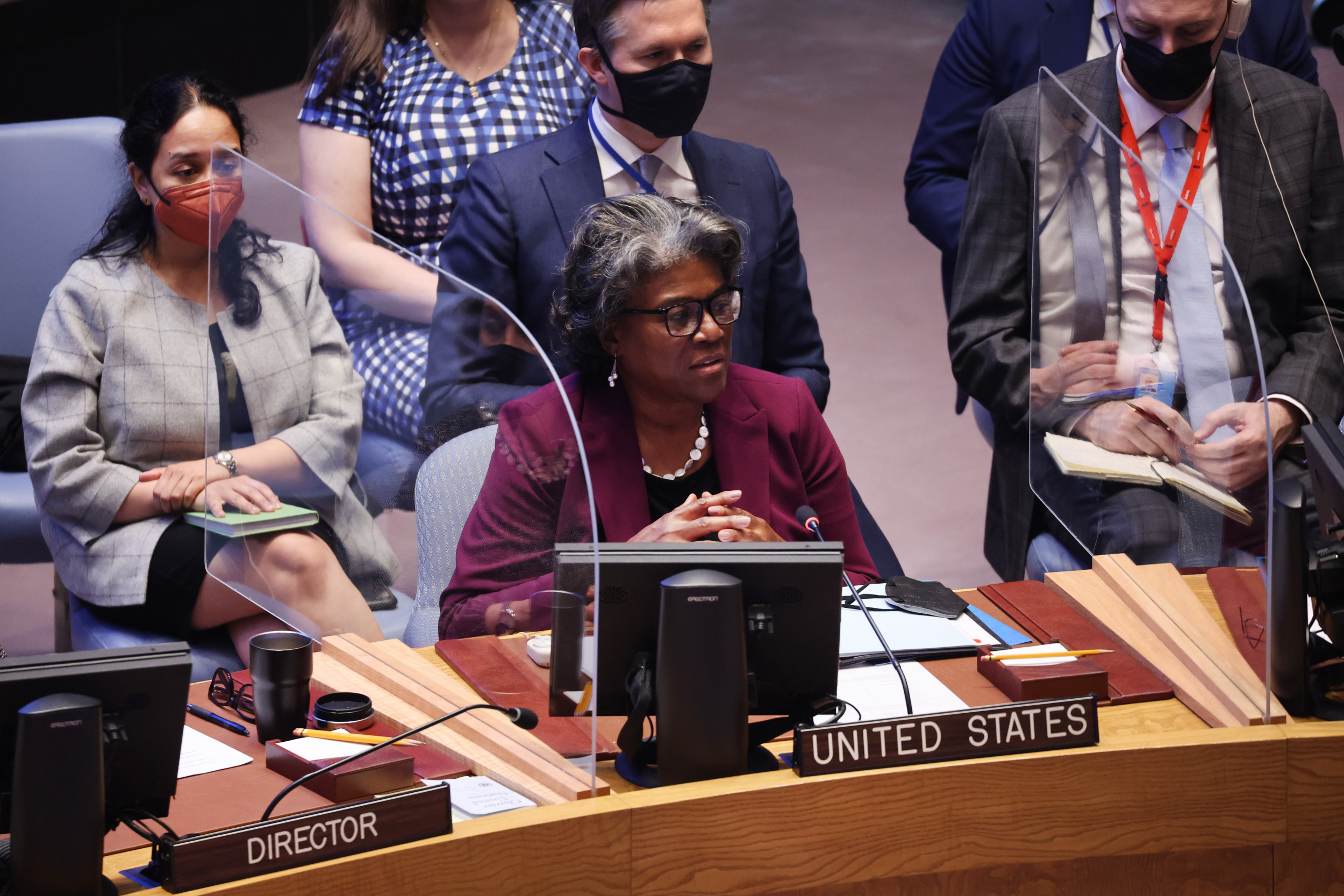 The United States aims to continue Russia’s isolation at the United Nations as it takes the reins at the top table of the global governing body this month.

Speaking at the U.N. headquarters in New York on Tuesday, Linda Thomas-Greenfield, the U.S. permanent representative, laid out a wide-ranging agenda that included two signature events: conflict and food security on May 19, and the impact of digital technology on political governance on May 23.

Since Russian President Vladimir Putin ordered his military offensive against Ukraine 10 weeks ago, developments at the U.N. have had little impact on events on the ground. But that hasn’t stopped the west and others from rallying behind Ukraine, which has secured three major diplomatic victories, now all part of the historical record of the Russian invasion.

Assuming the Security Council’s rotating presidency at this time means the 15-member body “will, of course, be seized with Russia’s war in Ukraine,” said Thomas-Greenfield. The council has met more than a dozen times on the issue and was scheduled to convene again on Thursday.

Western delegates, including from the U.S. Mission, led efforts to bring countries to the table for votes at the Security Council and General Assembly. Several developing nations have chosen not to openly condemn Russia, many on account of important political and economic relationships with Moscow. However, significant numbers have picked a side with their votes in the chamber.

On March 2, 141 of the 193 U.N. member states deplored Russia’s invasion and demanded an immediate withdrawal of its forces from Ukraine. On March 24, 140 countries in the General Assembly called on Russia to cease its hostilities, which had created a humanitarian crisis for civilians.

China, Putin’s closest political ally, abstained in both votes but opposed the assembly’s unprecedented decision to remove Russia from the Human Rights Council on April 7. Moscow’s representatives became the first among the veto-wielding “P5” to be kicked off the U.N.’s top rights body.

At the time, Thomas-Greenfield, who launched the campaign after the discovery of mass civilian deaths in the Ukrainian city of Bucha, called the vote “a historic moment.” President Joe Biden cited the General Assembly’s move as further evidence that the war had turned Russia into an “international pariah.”

Thomas-Greenfield said trying to stop the Russian invasion had been challenging for the Security Council, but she argued that the U.N.’s top table had been “extraordinarily successful” nonetheless.

In the first week of the war, when Russia held the council presidency, the Russian delegation vetoed an attempt by the remaining 13 members to condemn its military action. China, caught in something of a bind, abstained. That and subsequent abstentions on the assembly floor were a sign that Beijing was “uncomfortable with the relationship that they’ve established with the Russians, as it relates to Ukraine,” Thomas-Greenfield said last month.

She said the U.S. had been putting pressure on China to change its pro-Russia lean, but that has mostly backfired. Still, the American diplomat viewed the abstentions as favorable to Ukraine’s cause.

“But as this war continues, I think China will be put in a position of having to determine whether they are going to continue to defend this aggression that Russia is involved in, to continue to defend the human rights violations and the war crimes that the Russians are committing,” Thomas-Greenfield said in April. “If they decide to use their veto in support of Russia, they’re going to have to explain that to the entire U.N.”

The U.S., taking over from Britain’s council presidency, is expected to call or support more pro-Ukraine votes at the General Assembly. Albania and Brazil, next in line to lead, have tended to vote with their Western and African counterparts on the Security Council.

It means Putin will have to wait until August for a friendly face to emerge as China takes charge. Beijing may not put forward favorable motions, but it could at least stop Russia’s further isolation on the world stage.