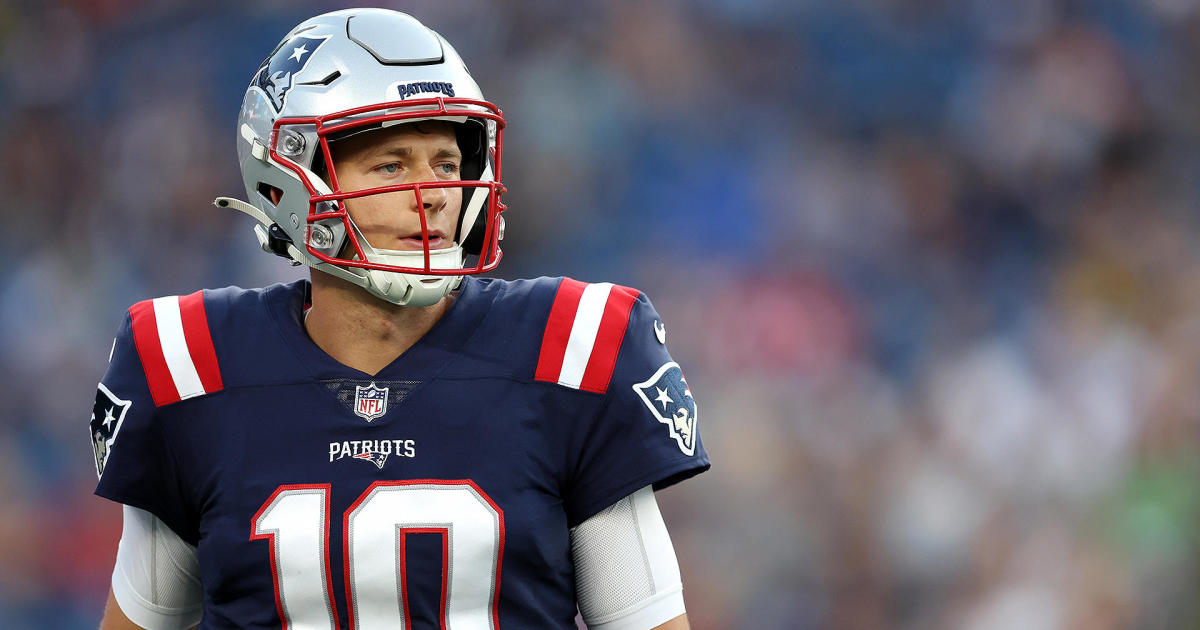 FOXBORO — With the 2022 Patriots season inching closer and closer, the WBZ-TV/CBS Boston sports team will tackle a new question surrounding the team each day leading up to Sunday’s opener in Miami.

To kick off the week, we’re focusing on the birthday boy himself: Mac Jones. The quarterback turns 24 on Labor Day, and the sports team discusses if Jones will be better in Year 2 than he was during his impressive rookie campaign.

Last year as a rookie, Jones completed 68  percent of his passes and guided the Patriots to a 10-7 record. That was good enough for a return to the postseason, though we all know the Patriots were far from good enough in the playoffs.

After gliding through his rookie season on training wheels, the 2022 season is going to be all about Mac. With Josh McDaniels enjoying the spotlight in Las Vegas, the New England offense now rests on Jones’ shoulders. Sure, he has Matt Patricia and Joe Judge by his side, but as you may have heard, neither coach much experience when it comes to coaching offense or calling plays on that side of the ball. There’s a really good chance that Bill Belichick will eventually assume offensive duties, along with the myriad of other duties that he has on his agenda. But when it’s all playing out on the field, it will fall on Mac Jones.

Is all of that a good thing, or is it setting the quarterback up for disaster? The WBZ-TV and CBS Boston sports crew weighs in on one of the biggest topics surrounding the 2022 Patriots season.

I have to go positive with this, because I believe in Matt Patricia. Mac had a really good rookie season, and as he settles down and the offense starts clicking this season, he will end up with better numbers than he put up as a rookie.

I think Mac will be better in his second season. He’s got the weapons and once the offense figures things out, he certainly should put up better numbers than the 22 touchdowns and 13 interceptions from a season ago.

Hunter Henry, Jonnu Smith, DeVante Parker, Jakobi Meyers, and Nelson Agholor (and eventually Tyquan Thornton) should help Mac a lot. And once the running game gets settled, the balance will help as well.

The one number to be nervous about? Mac was sacked 28 times last year. That could go up based on the pressure he was under during camp and the preseason.

Statistically, yes, Mac Jones will have a better season in 2022. But I don’t think that will be a great thing overall.

The Patriots had a good defense and a reliable running game last year, and I’m not sure either one will be a given this year. So Mac will end up with more than his 3,800 passing yards and 22 touchdowns, but that may be mostly a result of the Patriots playing from behind and/or needing to pass more than they did a year ago.

Mac will have a better year on paper, simply because the Patriots are putting the weight of the earth on his shoulders. The addition of DeVante Parker to his wide receiver arsenal should mean a few more touchdown passes this season, and if Jonnu Smith plays even slightly better than he did in his first year in New England, the offense may actually be pretty good.

But I fear for Jones’ wellbeing after seeing the offensive line during the preseason. Mac didn’t look comfortable back there, and even when he had time in the pocket, he seemed rushed and frazzled. That is a major, major problem.

The Patriots will probably be playing a lot of catch-up this season, so Jones will have a lot of opportunities to rack up some stats. He may put up bigger numbers than he did as a rookie, but the only stat that really matters — win total — may suffer a drop.

Tune in to Patriots-Dolphins on WBZ-TV — the television home of the New England Patriots! Coverage begins Wednesday night at 9:30 p.m. on TV38 with Patriots 1st Down, and continues Friday night on WBZ-TV at 7 p.m. with Patriots All Access. Sunday’s coverage kicks off at 11:30 a.m. with Patriots GameDay, the Patriots and the Dolphins get underway at 1 p.m., and after the game switch over to Patriots 5th Quarter on TV38 for full reaction and analysis!