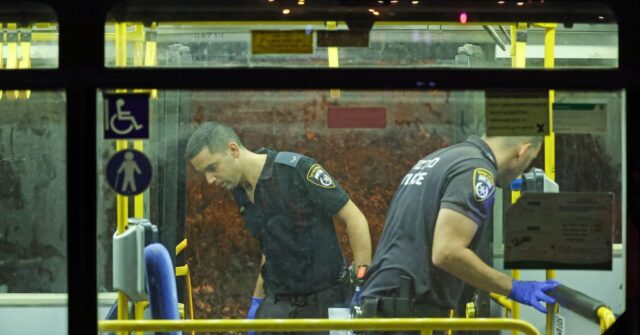 Seven people were injured, including the civilian bus driver, who was airlifted to to Rambam Hospital in Haifa along with a soldier who was sustained a bullet wound to his chest.

Several weapons were found at the scene after the terrorists fled. Two suspects were arrested shortly after and a third is believed to still be at large.

The terrorists’ getaway car caught on fire as they tried to escape, possibly from flammable liquid they planned to throw at the bus, local officials told Hebrew-language media.

“We will continue to ramp up our targeted operations against terror in the Judea and Samaria area,” he added, using the biblical name for the West Bank.

“We will continue to get to anyone who tries to harm the citizens and soldiers of the State of Israel,” Lapid said in a statement.

The shooting comes amid an increase in Palestinian violence against Israelis, with the past week alone seeing several attacks.