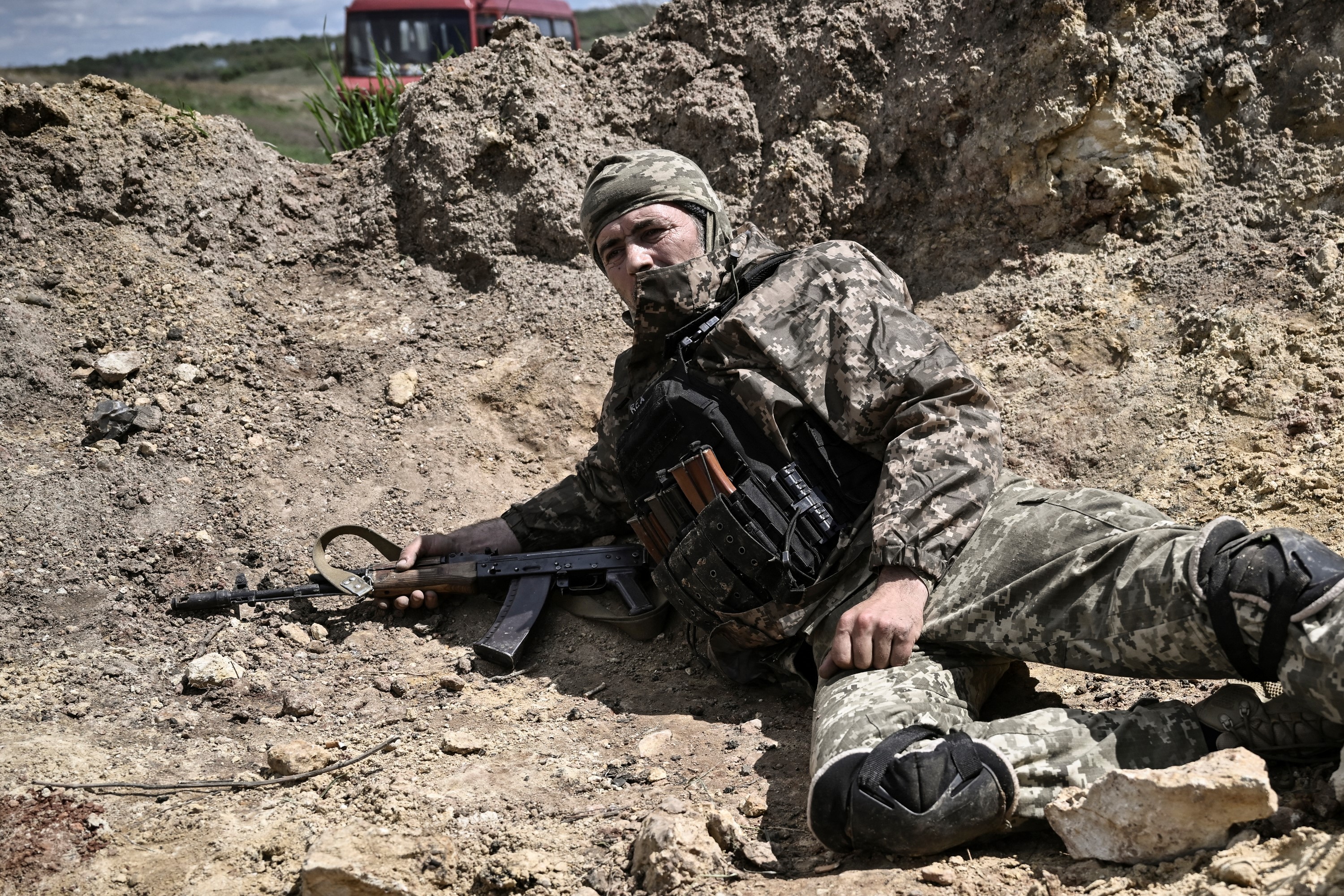 The governor on Ukraine’s frontline has told Newsweek that defenders facing Russia’s eastern offensive in the Donbas region are holding their ground, but are badly outgunned and in need of more Western military aid.

Pavlo Kyrylenko said Thursday that the frontline situation in his Donetsk Oblast “is very intense,” as Ukrainian troops sought to blunt Russian advances designed to encircle defending units around the city of Severodonetsk and fully occupy the neighboring Luhansk Oblast.

“Right now, Russians are aiming to encircle our troops in Luhansk Oblast, so they are attacking the Bakhmut region,” Kyrylenko explained.

Bakhmut is a city with a pre-war population of about 72,000 people. It lies directly west of the town of Popasna, where Russian forces have achieved a significant breakthrough in recent days. This thrust seeks to surround Severodonetsk from the south.

To the north, “heavy fighting is also continuing” around the city of Lyman, Kyrylenko said. An advance here would cut Severodonetsk from the northwest, and likely seek to close the circle by joining with Russian troops advancing from the Popasna and Bakhmut directions.

“The Armed Forces of Ukraine are holding their ground in a very smart way, but we need additional support from our allies,” Kyrylenko said.

Russia has marshaled the bulk of its forces on Ukraine’s eastern Donbas front in recent weeks, following the collapse of its northern Ukraine offensive which failed to capture Kyiv, the capital.

President Vladimir Putin’s forces are aiming to seize all of Donetsk and Luhansk oblasts, parts of which have been under the control of Moscow-backed separatist since 2014.

Ukrainian forces have confounded pre-war Western and Russian expectations since the invasion began on February 24.

But leaders in Kyiv are stressing that the defenders in the east are outnumbered and outgunned. President Volodymyr Zelensky said earlier this week that between 50 and 100 troops are being killed per day in the east.

Still, Russia’s gains are limited, slow, and costly. Ukraine claims to have killed more than 29,600 troops since February 24, reporting an uptick in combat deaths and equipment losses since Moscow launched its Donbas push.

“The enemy has several times more guns, vehicles and manpower than we do,” Kyrylenko said. “In spite of that, in three months the Russians have not achieved any of their goals, including complete occupation of Donetsk and Luhansk oblasts.”

“Ukrainian warriors are showing such an efficiency in the defense that no military expert could have predicted. They are doing things beyond possible. But any resource can end, so we really need support from our allies.”

Ukraine’s Western backers have established a steady eastward flow of weapons, much to the Kremlin’s chagrin. But Kyiv says it needs heavier weapons like tanks, other armored vehicles, and particularly long-range artillery systems.

Kyrylenko told Newsweek that artillery support could change the battlefield picture in what has become a bloody war of attrition.

“When people call artillery ‘the gods of war,’ they don’t do that just for the sake of nice words,” he explained. “The amount and quality of artillery can be a game-changer in our war. We need precise, far-reaching artillery. A lot of guns and a lot of shells.”

Russian forces have already seized the southern portion of Donetsk, which includes the devastated city of Mariupol on the Sea of Azov coast.

The defenders of the now-destroyed city were besieged by Russian forces from the start of the invasion.

The marine and Azov Battalion troops there fought a determined defense of the city, eventually retreating into the mammoth Azovstal steel works where some fighters reportedly remain embedded, though most have since surrendered to occupying troops.

While battling for the rest of Donetsk Oblast, Kyrylenko said the sacrifice of his compatriots at Mariupol should not be forgotten.

“I want to stress the heroism of the Mariupol garrison,” the governor said. “For 83 days, the Azov Regiment and other units held the defense, being encircled. The defenders of Mariupol have pulled a lot of Russian forces on themselves; they won time for Ukraine to regroup and strengthen our defense.”

Russia’s false “de-Nazification” justification for its invasion of Ukraine hinges partly on the Azov battalion, which has traditionally had connections to neo-Nazism and white supremacy ideology.

“Azov fighters are not the Nazi scarecrows that Russian propaganda is making of them,” Kyrylenko said. They are not Nazis, they are warriors—the best warriors in the world right now.”

Some Kremlin allies, including puppet Donetsk separatist leader Denis Pushilin, have called for Azov prisoners to be tried in Russian courts.

Captured Azov fighters could yet be part of a prisoner exchange, with Russian troops and high-value assets traveling the other way, Zelensky suggested earlier this week.

“Their love for Ukraine, military professionalism, perseverance and self-sacrifice is worth the respect of the whole world,” Kyrylenko added. “So the whole world must concentrate on rescuing their lives from Russian captivity.”