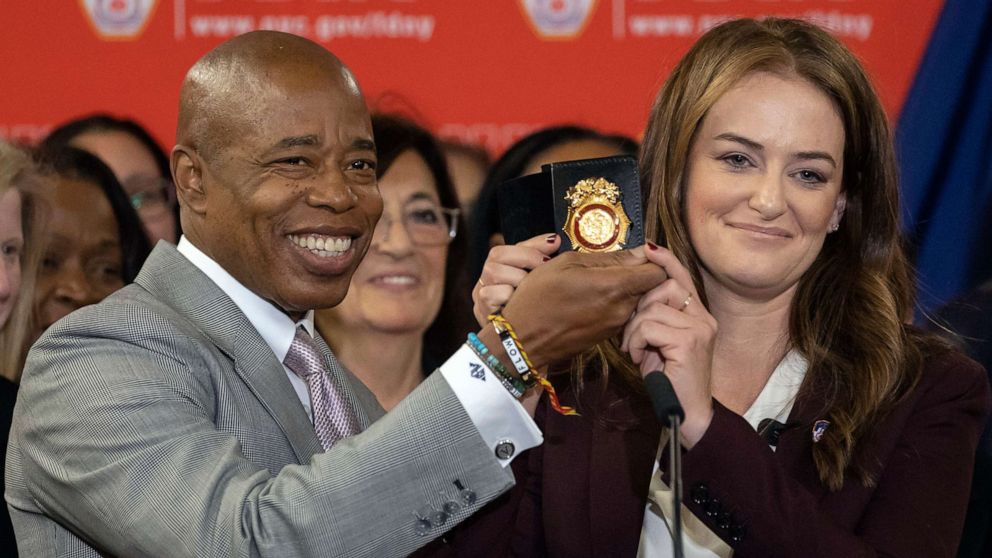 The largest fire department in the country has officially welcomed its first female commissioner.

Laura Kavanagh was sworn in Thursday morning as the head of the New York City Fire Department. She had been serving as acting commissioner of the department since February.

Kavanagh, 40, was surrounded by other top female officials in the mayor’s administration for what Mayor Eric Adams called a “historic appointment.”

“To say it is an honor of a lifetime is an understatement,” said Kavanagh, who will oversee the agency’s 17,000 employees, including firefighters, EMTs and paramedics, and a $2 billion budget.

She acknowledged her place as the first female leader of the FDNY in its 157-year history.

“This is the type of FDNY commissioner I will be — one that knows that I will succeed only if every person in my department and in our city sees my place at the table as also their own,” she said. “This moment, me being first, only matters if I am not the last.”

Adams said his administration conducted a national search for the next FDNY commissioner, but that they kept coming back to Kavanagh.

“Her style of leadership and commitment is just a reflection of what this city has to offer,” he said.

Kavanagh has worked for the agency for nearly a decade, including as first deputy commissioner. She became acting-fire commissioner after longtime Commissioner Daniel Nigro retired without naming a successor.

Adams touted work in the FDNY’s response to the Ebola outbreak of 2015 and the COVID-19 pandemic. She also oversaw a firefighter recruitment campaign that saw the department’s most diverse applicant pool in its history, including graduating the largest class of women in three decades, he said.

“Women have bravely served in the FDNY since 1982. This appointment of Laura Kavanagh highlights the ability, dedication and service which women demonstrate every day to the people of New York,” Jackie-Michelle Martinez, president of the United Women Firefighters, said in a statement. “As the number of female firefighters increases, there will be continued interest in ensuring and creating a fair and amicable work environment.”

Kavanagh’s appointment follows in the footsteps of another historic first for the city. Earlier this year, Keechant Sewell became the first woman to serve as commissioner of the New York City Police Department, the largest police department in the country.