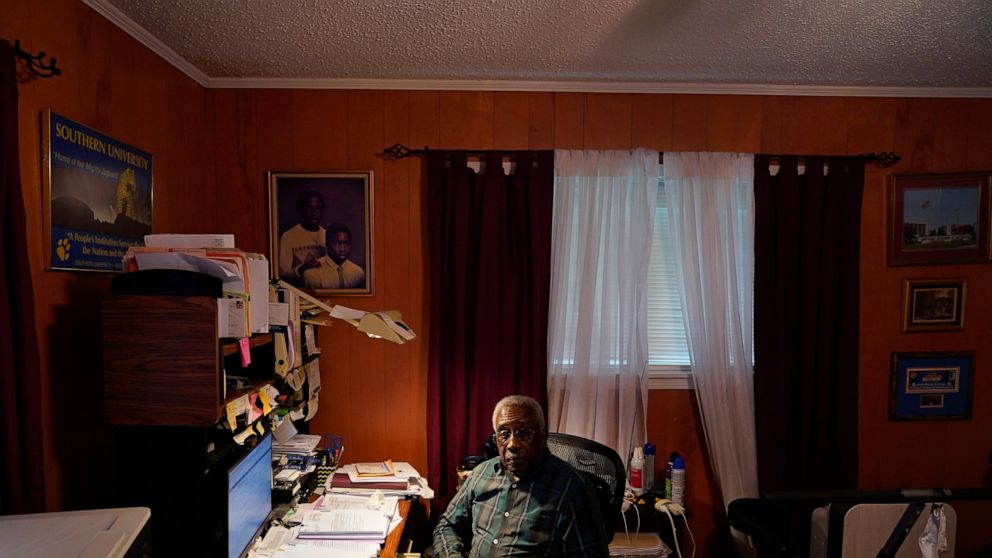 BATON ROUGE, La. — When Press Robinson registered to vote in South Carolina in 1963, he was handed a copy of the U.S. Constitution and told to read it aloud and interpret it.

Robinson, then a college sophomore, wasn’t surprised. He heard stories from others in the South’s Black community who faced Jim Crow-era methods to suppress Black votes – from literacy tests to poll taxes to the infamous “jellybean test” that required prospective voters to guess how many of the small candies were in a jar.

As Robinson began reading, he thought about the woman behind him who was also registering to vote for the first time: his 43-year-old mother, who had never fulfilled her constitutional right, partly out of fear that she would encounter this exact situation.

In 1965, the Voting Rights Act outlawed the discriminatory voting practices of many states in the South, where Jim Crow laws also restricted how and where Black people could live, work, eat and study.

Yet, nearly 60 years later, Robinson and civil rights activists say those gains are being eroded. In Alabama, Florida and Louisiana, new congressional maps that some judges have ruled dilute the power of Black voters are being used in upcoming elections.

Civil rights leaders worry the maps could diminish minority representation on Capitol Hill. The issue is especially contentious this year, when Democrats — traditionally favored by minority voters — are fighting to hang on to slim majorities in Congress in midterms that tend to reward the party not in the White House.

“I’m hurt. I’m shocked. I’m disappointed,” an 85-year-old Robinson said. “I’m also a little afraid, because I don’t know where all this is heading.”

Every 10 years, state lawmakers, armed with new U.S. Census Bureau information, redraw political maps for seats in the U.S. House, state Senate and state House. It is typically an extraordinarily partisan process, with each major party trying to scoop up enough of its voters to guarantee wins in the largest number of districts. The boundaries determine which political parties will make decisions that have a profound impact on people’s lives, such as abortion, gun control and how billions of tax dollars are spent.

Under the Voting Rights Act, mapmakers are required to draw districts with a plurality or majority of African Americans or other minority groups if they live in a relatively compact area with a white population that votes starkly differently from them.

Republican legislators have often used this to their advantage by packing one district with Democratic-leaning African American voters, leaving the remaining seats whiter and more Republican.

Both Alabama’s and Louisiana’s Republican-dominated legislatures produced such maps after receiving the latest numbers from the 2020 U.S. census. In both cases, Democrats and civil rights groups sued, and courts ordered new maps drawn.

In Alabama, the U.S. Supreme Court put the lower court’s ruling on hold, essentially saying there wasn’t enough time to redraw maps ahead of the election and that it would take up arguments in the fall. The court also delayed a ruling that would have allowed the creation of a second majority-Black district in Louisiana, until it can hear arguments in the Alabama case. Any ruling is unlikely to come before 2023.

In Florida, the GOP-led legislature approved — and an appeals court upheld — a map created by Republican governor and potential 2024 presidential contender Ron DeSantis that would dismantle at least one district where Blacks have a strong say at the polls.

“What this ultimately means is that (Black voters) will not have as big of a voice as they should if the districts were drawn more fairly,” said Robert Hogan, a professor and chair of Louisiana State University’s political science department.

In Alabama, GOP lawmakers packed most Black voters into only one of seven congressional districts, even though Blacks make up 27% of the state’s population.

In Louisiana, where nearly one-third of the state’s population is Black, GOP lawmakers approved a map containing five majority-white districts, all of which favor Republican incumbents. The 2nd Congressional District, held by Democratic U.S. Rep. Troy Carter, is the sole Black-majority district. It stretches from the New Orleans area along the Mississippi River up to the capital city of Baton Rouge.

Democrats and Black activists want two Black-majority districts instead of just the one.

“We want our seat at the table,” Louisiana state Rep. Denise Marcelle, a Democrat and Black caucus member, said during a recent legislative session. “It’s real simple. … Give us an opportunity to elect another Black seat so that we can fight for the issues that we believe our people want us to fight for.”

There is also another reason why the GOP generally opposes — and Democrats support — additional majority-Black districts. For decades, Black voters have overwhelmingly voted Democratic. Adding Black-majority districts could boost the party’s representation in the House.

The way Robinson sees it, though, it’s not about more Democratic seats and fewer Republican ones; it’s about fundamental rights for which Blacks have fought too long and hard to let slip away.

“This is 2022. I thought that once we got past those initial hurdles in the ’60s that things would really just move forward and that we would be treated as regular Americans,” Robinson said. “But we are not.”