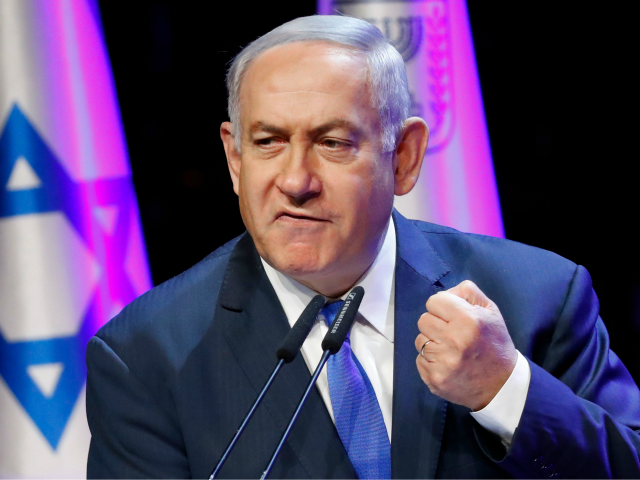 Former Israeli Prime Minister Benjamin Netanyahu gloated Monday as the prosecution in his corruption trial asked the court for permission to amend its indictment against him when a key witness backtracked on his earlier testimony against him.

“In your face,” Netanyahu told reporters.

He faces three charges, which have been described by critics from the beginning as bogus, and as an apparent effort by Netanyahu’s political enemies in the Israeli legal fraternity to remove him from power.

In what is known as case 4000, considered the most serious of three, “Netanyahu is accused of providing lucrative benefits to Shaul Elovitch, then-owner of [communications firm] Bezeq and the Walla news site, in exchange for favorable coverage,” the Times of Israel notes.

A former Netanyahu-aide-turned state’s witness, Shlomo Filber, told investigators in 2017 that Netanyahu made a hand gesture suggesting “drop the whole thing.” He then changed his story to implicate Netanyahu.

But last week, Filber went back to his original story, and told the court that he may have misinterpreted the non-verbal cue. The prosecution then asked the court to change a key date in the indictment to account for Filber’s apparent inconsistency.

Columnist Caroline Glick noted at the time that the charge was ridiculous, since the deal to approve a merger involving Bezeq was “approved by all the relevant legal and regulatory authorities” and that competitors received similar tax breaks. Bezeq actually lost money on the deal. Moreover, if Netanyahu had hoped for better coverage from Walla, he never received it: “Some 75 percent of the articles about him were negative,” as they were in much of the rest of the left-wing Israeli media.

The prosecution has since been clouded by revelations that state investigators unlawfully hacked Netanyahu’s phone and those of his associates in an effort to spy on him and use damaging personal information to turn witnesses against him.

Netanyahu has refused to accept any plea deals and has insisted on proving his innocence. The prosecution has stumbled as the post-Netanyahu government, a ragtag coalition led by former aide Naftali Bennet, has moved closer to internal collapse.