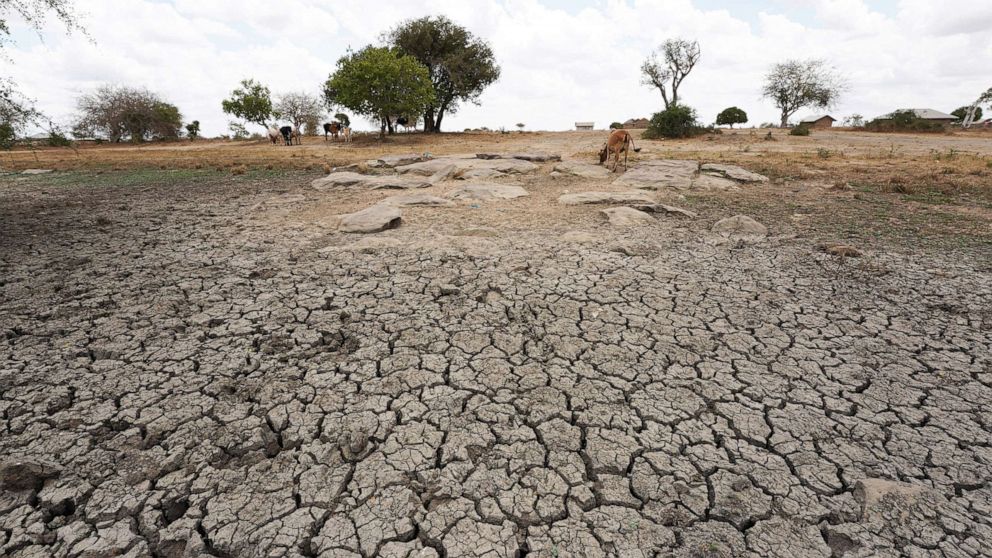 In northern Kenya’s drought-stricken Turkana County, a group of children carried sacks of palm fruit atop their heads as they walked across the parched earth back to their tiny village.

They walk more than 20 miles to gather the small, bulbous fruit from the African oil palm several times a week. It will be their breakfast, lunch and dinner. One of the children, Ekiru, said the last time he ate something other than palm fruit was when a goat died of starvation and his village divided up the carcass.

“There is nothing else,” Ekiru’s grandmother, Nakaleso Lobuin Nipayan, told ABC News. “When the palm fruit go away, we will die.”

Famine is just around the corner for many others here. Up to 20 million people across the greater Horn of Africa region could go hungry this year as delayed rains exacerbate extreme drought amid soaring prices of food and fuel as well as a shortfall in humanitarian aid, according to the World Food Programme, the food-assistance branch of the United Nations.

“If they don’t receive assistance, we will see them go into something we call severe acute malnutrition,” Lauren Landis, the WFP’s country director for Kenya, told ABC News. “And there’s the threat of death.”

According to a report released Wednesday by the U.N. Convention to Combat Desertification, the number and duration of droughts have increased 29% globally since 2000. While droughts represent just 15% of the world’s natural disasters, they took the largest human tool — approximately 650,000 deaths from 1970 to 2019. This year, more than 2.3 billion people face water stress, while almost 160 million children are exposed to severe and prolonged droughts, according to the report.

The report, entitled ​​”Drought In Numbers, 2022,” warned that unless action is stepped up, an estimated 700 million people will be at risk of being displaced by drought by 2030; an estimated one in four children will live in areas with extreme water shortages by 2040, and droughts may affect over three-quarters of the world’s population by 2050.

Following several consecutive poor rainy seasons, the Horn of Africa is facing what’s been described as its worst drought since 1981. Aid workers fear the outcome of the ongoing drought will be deadlier than the one that affected all of East Africa between 2011 and 2012, claiming the lives of an estimated 260,000 people.

In Kenya, the drought has been declared a national emergency. Between 80% and 90% of reservoirs and dams are drying up in Turkana, Kenya’s largest and northwesternmost county. It is also one of the hottest and driest. The communities here can no longer survive on farming, fishing or livestock.

ABC News traveled to Kenya with the International Rescue Committee in early May. At an IRC-run hospital within a refugee camp in the rural town of Kakuma, cases of malnutrition have increased four-fold in recent months. The refugees had fled their homes in neighboring countries and crossed into Kenya — considered one of the richest East African economies — only to find little food or water.

“People [are] coming from all over the region thinking that they can find safety and nourishment in Kenya,” Dr. Sila Monthe, who works at the Kakuma refugee camp, told ABC News. “[But] Kenya is in a drought and can’t really support all of these people.”

The hospital’s pediatric wing is reaching capacity, with currently an average of 20 admissions per day, according to Monthe. Many of the children being treated here exhibit the telltale signs of severe malnutrition, with some even too weak to cry.

“People have been dying just trying to get to the hospital,” Monthe added.

Although the success rate of the pediatric wing’s stabilization ward is consistently above 85%, Monthe said that means 15% of the patients — mostly young children — still die.

“Because they are so malnourished, the whole body shuts down,” she told ABC News. “That includes the digestive tract, so they’re usually unable to digest food.”

The situation in the Horn of Africa has also been compounded by the fallout from a war on another continent, thousands of miles away.

Since Russian forces invaded neighboring Ukraine in February, the cost of grain, fuel and fertilizer has skyrocketed worldwide, worsening hunger crises. Many countries in East Africa rely on Russia and Ukraine for a significant percentage of these agricultural commodities, according to data collected by the U.N.’s Food and Agriculture Organization.

The Kenyan government also raised the price of petroleum products for March, April and May, citing the conflict in Ukraine. Meanwhile, the cost of WFP’s local food basket — the minimum food needs per family per month — has increased by 23% in the past year, driven in part by the Ukraine war.

Back in Ekiru’s village, near the town of Lorugum, he and his grandmother smashed palm fruit against rocks to extract the fibrous, faintly sweet flesh.

“This normally will sustain them until God remembers them,” the grandmother, Nipayan, told ABC News, noting that she has “never seen” a drought as “bad “as this.

Thunderclouds suddenly rolled in overhead and it began to pour with rain.

“I feel happy,” said Ekiru, whose name means “rain” in the Turkana language.

But the sporadic and localized rainfall is not enough, even as it triggers a deluge in Ekiru’s village.

“We were hoping that this rain will be good enough to be able to pull out some of the population out of the situation they were in,” Shashwat Saraf, the International Rescue Committee’s regional emergency director for East Africa, told ABC News. “But this rain also feeling and being below average will actually result in catastrophic consequences for the population.”

“We are talking about lives of millions of people in the region,” he added, “and I think we cannot say in words in terms of what it means for those individuals and families that are impacted by this crisis.”

One of the goats belonging to Ekiru’s family died during the recent heavy rain, providing them with a rare meal other than palm fruit. They once owned 20 goats, but now only have eight.

More than 1 million livestock deaths have been reported across several Kenyan counties, “majorly as a result of starvation and diseases,” according to the National Drought Management Authority’s bulletin for April.

Click here to help drought-affected families in East Africa via the IRC, WFP and Save the Children.