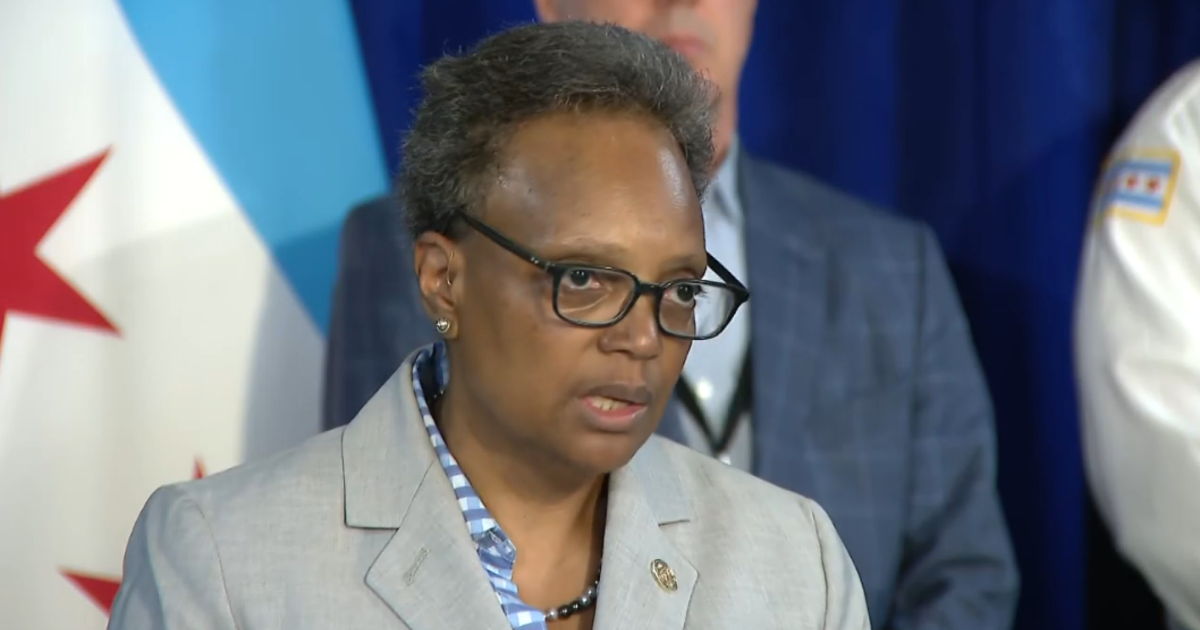 CHICAGO (CBS) — A day after banning unaccompanied minors from visiting Millennium Park after 6 p.m. from Thursday through Sunday, in response to the shooting death of a teen near The Bean, Mayor Lori Lightfoot announced Monday she is moving back the citywide curfew for minors by one hour on Friday and Saturday nights.

Lightfoot said she is signing an executive order to move the 11 p.m. curfew for children under age 17 on Friday and Saturday nights to 10 p.m. The 10 p.m. curfew on Sunday through Thursday nights will remain the same.

Both the new citywide curfew and the restrictions on unaccompanied minors at Millennium Park begin this weekend. Crowds kicked and jumped on cars traveling through the city Saturday evening, but that was just surface-level damage relative to the worst.

“Young people absolutely are welcome downtown, but in the evening hours they must be accompanied by a responsible adult,” Lightfoot said. “Parents, guardians, you cannot just send your children out into the streets, no matter the destination, without knowing where they are going, who they are with, and making sure that there is a responsible adult with them to make sure that they safely conduct themselves in public, and that they safely return home.”

The new policies come after a chaotic night in Chicago’s Loop that left a teenager dead Saturday night.

A 16-year-old, Seandell Holliday, was shot and killed in the mayhem, just steps from Cloud Gate, the sculpture more commonly known as The Bean.

The teen was shot in the chest around 7:30 p.m. as rowdy crowds of young people converged downtown. Hours later, two men, between the ages of 18 and 20, were shot around 11:41 p.m. while walking with a group of people when two male juveniles fired shots into the group.

Police said following the chaos, 26 teens and four adults were arrested, and there were six curfew citations. Seven guns were recovered and five gun arrests were made in connection with the chaos Saturday night.

A 17-year-old boy, Marion Richardson, has been charged in Seandell’s death. Richardson is facing charges of second-degree murder, aggravated battery and aggravated unlawful use of a weapon.

A $250,000 cash bond was set for Richardson Monday afternoon.

According to the Chicago Police Department, the teen was placed into custody without incident moments after the shooting.

Meantime, Lightfoot said she wants to reassure the public that “our downtown is safe.”

“We are taking these specific steps to make sure that our downtown remains safe,” she said. “I think the vast majority of young people that were out there on Saturday night were out there to try to have fun, and enjoy a summer evening. Unfortunately, we saw tragedy happen because young people carried guns downtown, and that’s just simply not going to be acceptable, and we’re going to make sure that we hold those people – whether they’re adults or young people – who pick up a gun and try to solve petty disputes by pulling the trigger, we’ve got to hold those folks accountable.”

Lightfoot also said it has been “extremely distressing” to learn that some parents have been allowing children as young as 10 years old to come downtown by themselves at night.

“Now, that’s simply not smart, and its’ definitely not safe, no matter the destination. It’s not just because it’s downtown. Our children need to be accompanied by adults, period,” she said.

The mayor said signs will be posted at Millennium Park informing visitors of the new rules, and the city will be teaming up with various groups, including the Chicago Public Schools, community organizations, and faith-based groups, to educate people about the new rules.

Chicago Public Schools officials will be sending home a letter with all students on Monday, outlining the new policy to make sure all parents are aware of the new rules that will be enforced.

“No, we don’t want to arrest children. If we have to because they’re breaking the law, we will, but what we’ve seen in other areas of the city when issues have arisen is our officers talk to the young people, educate them about what the rules are, and in most instances the young people disperse without any incident. That’s what we’re hoping will happen,” Lightfoot said.

The mayor said the city will be partnering with the Chicago Public Schools and other schools across the city to explain the new curfew policy to students. She also said the Chicago Police Department “will exhaust all other efforts before they take law enforcement actions to make sure that our young people are safe.”

Lightfoot said enforcement of the new citywide curfew and the new restrictions at Millennium Park will focus on educating children and their parents about the new rules. Curfew violations can face a fine of up to $500, but Lightfoot said police who find children out in violation of curfew will first simply let them know what the rules are and tell them to go home.

“Our goal here is to educate people into compliance. Our goal is not to bring down a heavy hammer of penalties on kids or their parents; but obviously parents, guardians, and caring adults have a role to play, and my expectation and hope is that they’re going to step up,” she said.

The mayor said signs will be posted at Millennium Park informing visitors of the new rules, and the city will be teaming up with various groups, including the Chicago Public Schools, community organizations, and faith-based groups, to educate people about the new rules.

“No, we don’t want to arrest children. If we have to because they’re breaking the law, we will, but what we’ve seen in other areas of the city when issues have arisen is our officers talk to the young people, educate them about what the rules are, and in most instances the young people disperse without any incident. That’s what we’re hoping will happen,” Lightfoot said.

“The last place that any of us want to be is enforcement,” she added. “Where we want to start is to engage and educate our parents, and activate them to be much more engaged in what’s going on with their children; not just sending them in an Uber, or a car, or on the train to far-flung parts of the city without any adult supervision whatsoever. And I think if we can do that successfully, that’s where we need to spend our time and resources.”

The mayor said she does not believe restricting unaccompanied children from visiting Millennium Park at night on the weekends will simply push the problem to other parts of the city, because the city is also publicizing hundreds of organized activities available for minors at schools, parks, libraries, community groups, and other locations across the city.

“We’ve heard from many that our young people need more safe spaces to socialize and engage in fun and productive activities, and we completely agree. That’s why every week there are literally hundreds of activities all over our city that are age-appropriate at our parks, our libraries, that are sponsored by faith groups, and community organizations. These activities are available in neighborhoods all over the city on weekends, during the week, right now,” she said.

The American Civil Liberties Union of Illinois has criticized the new restrictions at Millennium Park, saying the mayor’s plan “suggests that our City’s showcase park should not be available for all residents of Chicago.”

“Curfews and bans create group culpability for all young people – whether they are there to enjoy the sights and sounds of downtown or something else. The vague description – relying on an undefined ‘responsible adult’ – allowing young people to be present in the park and the promise of strict enforcement will result in unnecessary stops and arrests and further strain relations between CPD and young people of color. We will continue to monitor this situation closely,” ACLU of Illinois spokesman Ed Yohnka said in an email.

Lightfoot said she has “a lot of respect for the ACLU, but here on planet Earth, in reality, we have a crisis in our city, and we have to take action.

Mayor Lightfoot made the announcement while maintaining that downtown Chicago is a safe place to be.

“What I want to do is make sure we reassure the public that our downtown is safe,” she said.

We took a closer look – focusing specifically on The Loop – where everything went down over the weekend. We followed with the Mayor’s office and Chicago Police on the safety claims, since violent crime numbers are at the highest we’ve seen in the Loop since 2018. Aggravated assault and aggravated battery at all-time highs.

And these figures are without totals from the weekend.

Even if educating young people about the curfew is the plan for now, there will need to be officers stationed downtown to handle that. So how will that look this coming weekend, and where are those officers coming from, with staffing numbers low right now?

Molina asked for further details about how police staffing and resources would apply not only to enforcement, but overall safety downtown.

She also asked how additional police deployment downtown would be handled up against ensuring all neighborhoods have proper resources – particularly in the middle of a police staffing shortage.

In addition, Molina asked what would happen if education about the rules proved insufficient.

Molina also asked specifically where else in the city such restrictions on young people are working – as Mayor Lightfoot said they were. She further asked about concerns that strict enforcement of both the park restriction and the curfew is not possible – given issues with large groups this past week both downtown and near the North Avenue Beach and there not being enough officers needed to handle those issues.

Neither the Mayor’s office nor the Chicago Police Department answered any of those specific questions.

The response from the Mayor’s office was: “Please review today’s presser. Thank you.”

The response from the Police Department was: “CPD does not comment on operational specifics. We will continue to have sufficient resources in our downtown area.”