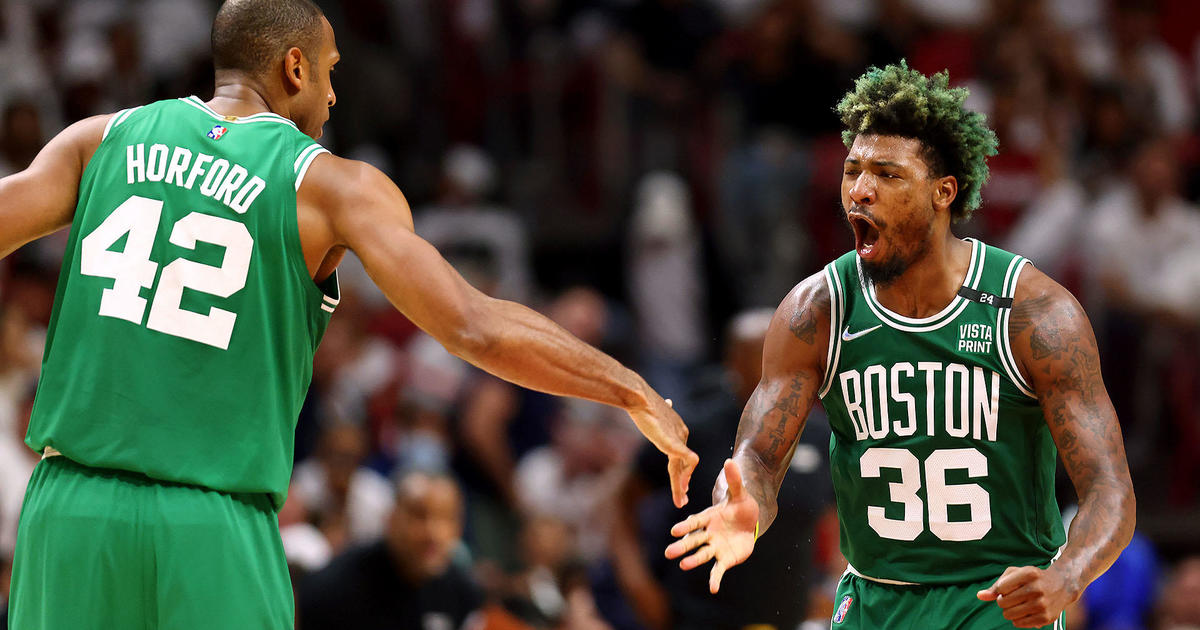 BOSTON  — Having to sit out Game 1 of the Eastern Conference Finals with a foot injury drove Marcus Smart crazy. He tried his best to help his team from the bench, but he really couldn’t do much as Boston lost its lead in the third quarter and the Heat swiped away the victory.

Smart was back in the Celtics lineup for Game 2 on Thursday night, and he made his mark in a number of ways. He was aggressive on both sides of the ball. He found his teammates for open looks and quarterbacked the offense like a true starting point guard. After a slow start, he found his shot in the second half.

And, as always, he played some incredible defense to keep the Miami offense from ever really heating up. Marcus Smart was Marcus Smart on Thursday night, and was a huge reason why the Celtics crushed the Heat for a 127-102 win, tying the Eastern Conference Finals at a game apiece with the series heading back to Boston.

“As always, he sets the tone,” Ime Udoka said of Smart’s return. “He’s Defensive Player of the Year for a reason. His ability to switch onto big bodies, another guy to throw at [Jimmy] Butler and [Bam] Adebayo. He brings the physicality every night and keeps everyone in line.”

With Smart back, the pressure was off Jayson Tatum (27 points) and Jaylen Brown (24 points) to create all of the offense. Boston had just nine turnovers, after coughing the ball up 16 times in Game 1.

The Celtics also had a lot more energy with Smart on the floor. The aggressiveness he shows on every play is contagious.

“Being the energy guy that I am, being the point guard that I am, I take a lot of pressure off guys so they don’t have to force it as much and can be who they are. Tonight, that was the main goal,” Smart said after the win. “We couldn’t let them outhustle us or beat us to balls. Offensive rebounds is where they killed us [in Game 1] and in transition and turnovers. We cut those down and our defense did what it does. We wanted to be the harder playing team tonight and I think we did that.”

Smart finished with 24 points and a dozen dimes while also pulling down nine rebounds and snatching three steals. His 12 assists were the driving force of Boston’s incredible ball movement on Thursday night, as the Celtics dished out 28 assists on 43 baskets.

Even though the ball was in his hand for most of the game, Smart had just one turnover. He now has 29 assists and only three turnovers over his last three games. For whatever reason, the naysayers will continue to shout that the Celtics need a true point guard. But Boston clearly has that in Smart, an aspect of his game that he has a lot of pride in.

“It’s what I’ve been doing my whole career, what I was drafted to do,” he said. “I waited my turn, and I’m blessed to be in this opportunity to show what I can do. The whole world is seeing what I can do in that point guard position.”

Smart scored 17 of his points after halftime, helping the Celtics hang on to their big lead this time around. There would not be a repeat of the Game 1 collapse with Smart on the floor.

He finished the game 8-for-22 from the floor and 5-for-12 from three-point range. He even broke some ankles.

Smart’s defense was also on point. He matched up with Butler on 31 possessions and held the Heat superstar to just nine points.

“That’s a full team effort, not just me. We all had a chance, and that what it comes down to,” Smart added.

After taking a big punch from the Heat in Game 1, the Celtics once again responded to adversity. Boston is now 4-0 this postseason following a loss.

As always, Smart was at the center of it all, doing a whole lot of everything to lead the Celtics to a victory on Thursday night.