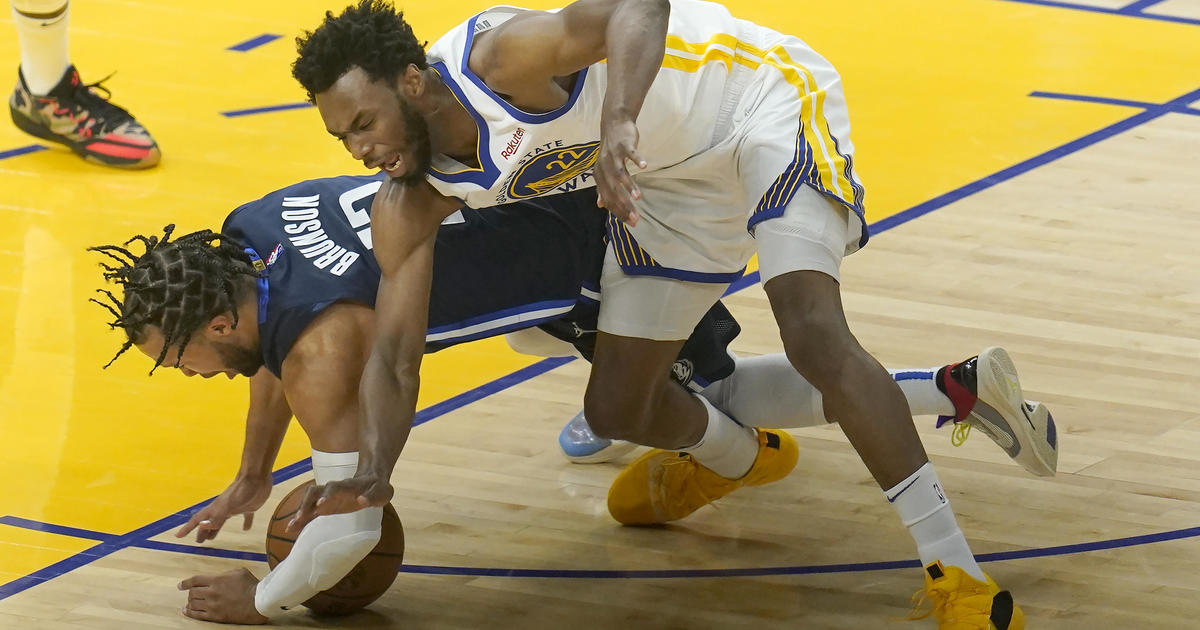 SAN FRANCISCO (CBS SF) — Often overlooked amid a roster of all-stars, Golden State’s Kevon Looney scored a career playoff high 21 points and pulled down 12 rebounds to rally the Warriors from a 19-point deficit to a 126-117 Game 2 Western Conference Finals victory over the Dallas Mavericks.

Steph Curry added 32 points with six 3-pointers and eight rebounds as Golden State grabbed a 2-0 lead in the best-of-seven series which now moves to Dallas on Sunday.

Lead by Looney, the Warriors dominated the paint all night long. Golden State scored 62 points in the paint, outrebounded Dallas by a 43-30 margin and dished off 33 assists, many of those led to layups.

Over the course of the contest, the Warriors attempted 16 shots at the rim, and converted 14 of them.

“Yeah, you’ve got to put a body on him. You’ve got to box him out,” Dallas coach Jason Kidd said of Looney. “We have to team rebound and make sure that he doesn’t come up with the rebound but that’s — he’s one of the guys that no one writes about or talks about, but we understand the impact he has on the game of giving those guys second or third opportunities. For him to have five offensive rebounds, that puts us in harm’s way. “

When asked if he ever felt under appreciated, Looney answered: “I feel honored just to be a part of the ride” with a shrug of the shoulder.

After going a frigid 11-of-48 from the 3-point line in a Game 1 loss, Dallas rediscovered its shooting touch and controlled the game in the first half, hitting on 15-of-27 from deep.

Luka Doncic, who scored jut 20 points in Game 1, had 24 points at the break while Jalen Brunson added 20 points as the Mavericks raced to as much as a 19-point lead and took a 72-58 halftime lead.

Fueled by  a 12-2 run with Draymond Green on the bench in foul trouble, the Warriors pulled to within 85-83 heading into the fourth  quarter.

“We know how good they are as a third-quarter team,” Dallas forward Reggie Bullock said. “It’s just something that slipped away from us as the game continued to go on.”

An Otto Porter 3-pointer gave Golden State its first lead of the game to open the fourth and then the Warriors hit on 15-of-19 shots to pull out the win.

“We have that attitude and spirit that we’re never out of it,” Curry said.

Golden State outscored Dallas by 12 in the third quarter, and then they outpaced the Mavs by 11 in the final frame to secure the victory.

“When you go 2-for-13 and you rely on the three, you can die by the three, and we died in the third quarter by shooting that many threes and coming up with only two,” Kidd said.

Jordan Poole came off the Warriors bench to score 23 points,  Andrew Wiggins added 16 and Klay Thompson 15.  Doncic finished with 42 points while Brunson had 31.

It was the 12th time that the Warriors have come back from a deficit of 15 or larger in the playoffs to win the game since Steve Kerr took over as head coach prior to the 2014-15 season.

That’s the highest number for any team in the last 25 seasons, per ESPN. That stat is a testament to coach Kerr, and the guys he has in the locker room.

Even if things don’t go their way early on, they don’t panic. Instead they stay on course and trust that the ball will start to bounce their way, and often it does.