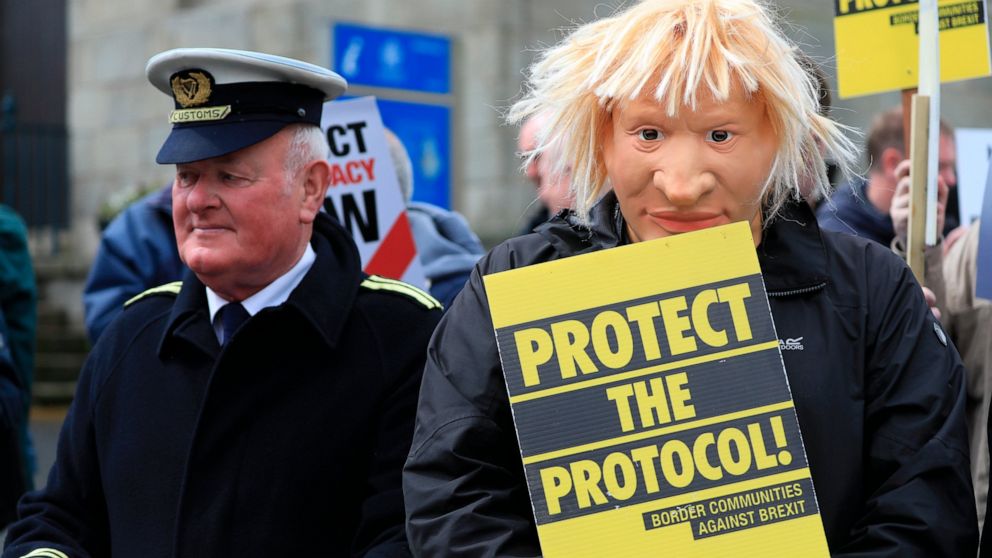 LONDON — Prime Minister Boris Johnson on Monday renewed British threats to break a Brexit agreement with the European Union, blaming it for a political crisis that’s blocking the formation of a new government in Northern Ireland.

Johnson said there would be “a necessity to act” if the EU doesn’t agree to overhaul post-Brexit trade rules that he says are destabilizing Northern Ireland’s delicate political balance.

Johnson held private talks with the leaders of Northern Ireland’s main political parties, urging them to get back to work. But his public message was aimed at the 27-nation EU, which he accused of refusing to give ground over post-Brexit border checks.

“I hope the EU’s position changes. If it does not, there will be a necessity to act,” Johnson wrote in the Belfast Telegraph.

The government is expected Tuesday to outline planned legislation that would give Britain powers to override parts of its Brexit treaty with the EU.

EU member Ireland warned that a unilateral move by Britain could imperil the entire post-Brexit trade agreement that the U.K. and the bloc hammered out in months of rancorous negotiations before the U.K.’s exit from the bloc in 2020.

Irish Foreign Minister Simon Coveney said Britain’s stance “calls into question the functioning of the TCA” — the trade and cooperation agreement between the U.K. and the EU.

Northern Ireland elected a new Assembly earlier this month, in a vote that saw the Irish nationalist party Sinn Fein win the most seats. It was the first time a party that seeks union with the Republic of Ireland has won an election in Northern Ireland, a bastion of Protestant unionist power.

The Democratic Unionist Party came second and is refusing to form a government, or even allow the assembly to sit, until Johnson’s government scraps post-Brexit checks on goods entering Northern Ireland from the rest of the U.K.

Under power-sharing rules set up as part of Northern Ireland’s peace process, a government can’t be formed without the cooperation of both nationalist and unionist parties.

Northern Ireland is the only part of the U.K. that shares a border with the EU. When Britain left the bloc and its borderless free-trade zone, a deal was agreed to keep the Irish land border free of customs posts and other checks, because an open border is a key pillar of the peace process that ended decades of violence in Northern Ireland. Instead, there are checks on some goods, such as meat and eggs, entering Northern Ireland from the rest of the U.K.

The British government agrees that the regulations, known as the Northern Ireland Protocol, are destabilizing a peace agreement that relies on support from both Protestant unionist and Catholic nationalist communities.

“The DUP has a mandate to see the Protocol replaced with arrangements that restore our place within the U.K. internal market,” party leader Jeffrey Donaldson said after meeting Monday with Johnson. “Our mandate will be respected.”

But while the DUP wants the Protocol scrapped, most other parties in Northern Ireland want to keep it, with some tweaks.

The EU says the treaty can’t be renegotiated, but it is willing to be flexible to ease the burden of checks.

Johnson, however, accused the EU of failing to recognize that the arrangements aren’t working.

“We don’t want to scrap it, but we think it can be fixed,” Johnson said after his meetings with the parties at Hillsborough Castle near Belfast.

He said he would prefer to do that through talks with the EU, but “to have the insurance, we need to proceed with a legislative solution as well.”

“It seems to us absolutely extraordinary that the British government would propose to legislate to break the law” by overriding the Brexit treaty, she said.

New legislation would take months to pass through Parliament, but the unilateral move would immediately anger the EU, which would hit back with legal action — and potentially trade sanctions. Even after Brexit, bloc is Britain’s biggest economic partner.

Irish Prime Minister Micheal Martin said he had spoken to EU Council chief Charles Michel and “agreed that the only way to resolve this issue is through substantive talks between the European Union and the United Kingdom government.”

Coveney said a U.K.-EU feud “is the last thing Europe needs right now” as it seeks unity in response to Russia’s invasion of Ukraine.

“This is a time for calmness,” Coveney said at an EU foreign ministers meeting in Brussels. “It’s a time for dialogue. It’s a time for compromise and partnership between the EU and the U.K. to solve these outstanding issues.”

Samuel Petrequin in Brussels contributed to this story.