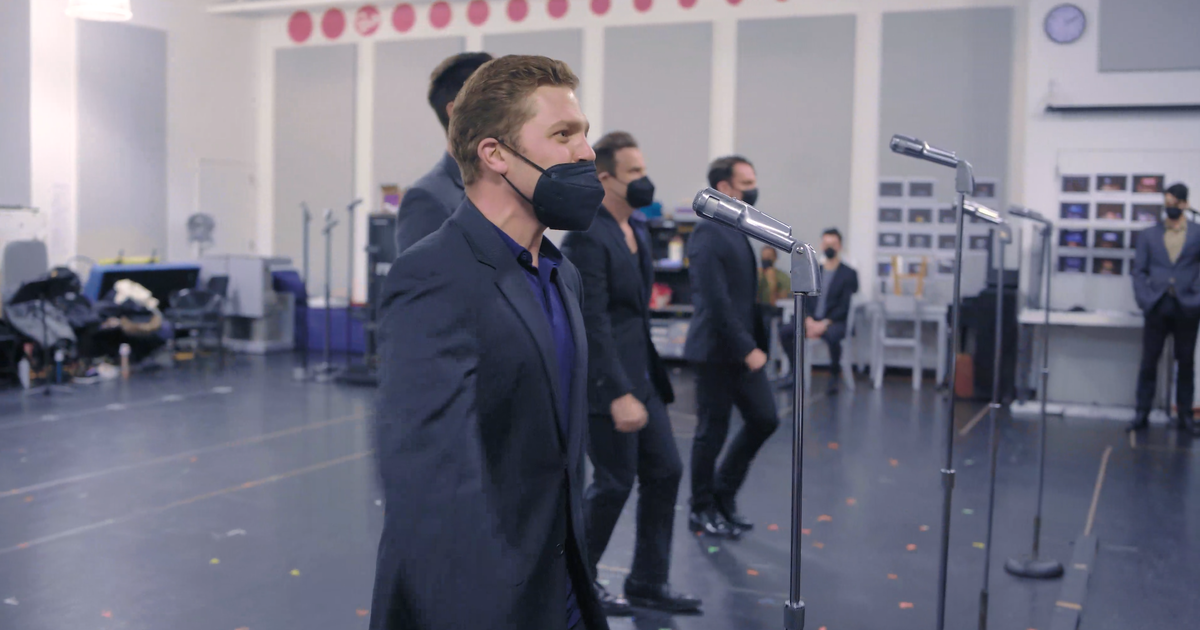 CHICAGO (CBS) — The new national tour of “Jersey Boys” opens next week at the Cadillac Palace Theatre, celebrating the music of the Frankie Valli and the Four Seasons.

“Jersey Boys” first opened on Broadway in New York back in the fall of 2005, and the a touring production held an open-ended run at the Bank of America Theatre – now the CIBC Theatre – from October 2007 until January 2010. Published reports from that time note that the Jersey Boys’ first Chicago run was intended to be a limited engagement, but turned out to be so popular that it turned into an open run with 951 performances.

Now, the Jersey Boys tour is back – only for a limited time this time around. Its run at the Cadillac Palace starts Tuesday, May 3, and ends Sunday, May 8. This touring run stars Jon Hacker as Frankie Valli, Eric Chambliss as Bob Gaudio, Matt Faucher as Nick Massi, and Devon Goffman as Tommy DeVito.

CBS 2’s Vince Gerasole talked this week with Goffman, who also appeared as an understudy for the touring production of “Jersey Boys” in 2011, and appeared in “On Your Feet!” and “Motown the Musical,” among other productions.

Here is part of their conversation:

Gerasole: “I want to talk about Jersey Boys. When you were growing up, were you exposed to the music of Frankie Valli, or do you know it primarily through the show?”

Goffman: “No, absolutely, I grew up on this music. My parents actually took me to see Frankie Valli when I was about 5 years old. When I was a young pup, I had a Fisher-Price record player, and I had all the albums of Buddy Holly, Frankie Valli and the Four Seasons, the Beach Boys, the Beatles – I was a big lover of this generation of music. So when I got the opportunity – when I became a professional actor and a musical theatre actor, the chance to mesh the two and be in a show like ‘Jersey Boys’ was pretty perfect for me.”

Gerasole: “Pop sounds come and pop sounds go. Why does this one seem to linger?”

Goffman: “The music of the Four Seasons? They spanned the generations. The thing is they started off doo-wop under the street lamp, and they moved into this – the music changed as the years went by, so if you notice, the Four Seasons were able to morph their music through the times. You see the 60s through the 70s, even into the 80s, and you see even these days, people are still covering the songs of the Four Seasons, and the music stands the test of time.”

Gerasole: “The original production of ‘Jersey Boys’ was just a phenomenon on Broadway, and a good part of that was that the theatre-going public was just at the right age to appreciate remembering those days. But we’re more than a decade away from that time. How is the music sitting with audiences now, and is there a different audience than maybe at the beginning of the run of the production?”

Goffman: “Yeah, you know, I’ve been kind of blown away by the amount of generations that are drawn to this music. I think when we hit ‘Beggin” in the second act – ‘Beggin” is a real popular cover song there’s out now of ‘Beggin’,’ and then all the young kids love it. You know, you get to ‘Can’t Take My Eyes off of You,’ which has been covered by so many bands – and also done at every wedding since the dawn of time – you notice in that moment in the audience, what people say is that you see like, a couple join hands – like an elderly couple sometimes that’s in the audience, you see them just hold hands at that moment when ‘Can’t Take’ starts. And you know that it’ just reached every generation of people.

“And I think what helps this show is the script. The story of these guys is just so truthful and real the way it was written by Rick Elice and Marshall Brickman. They did such great jobs – a brilliant job in telling the story in a way that the audience eats it up.”