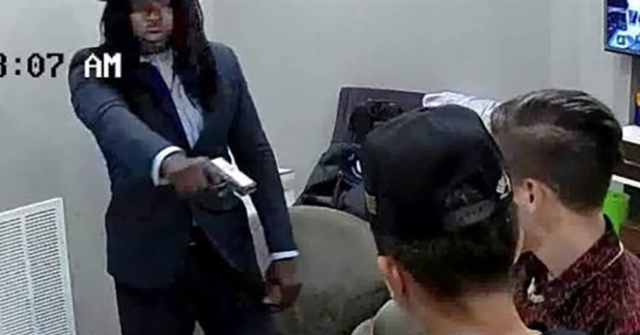 Federal prosecutors released photos Monday of an armed robbery inside a Diamond District jewelry store that occurred in 2019.

Photos from inside Avianne & Co. show Jaysean Sutton in a dark-colored suit pointing a handgun at workers, the New York Post reported Monday.

“Sutton, who pleaded guilty, can be seen in another shot guiding a zip-tied employee to a safe that he and two other suspects then looted,” the outlet said.

Over $4 million in jewels and other items were taken from the store on the morning of August 25, 2019, according to officials.

Security footage from 2019 showed the group inside the store:

The outlet also reported fellow jewelers on West 47th Street were disturbed by what took place.

“They did it quietly, that’s probably it. First of all, if they’re on camera I don’t know what they’re thinking. Second of all, the police are all over the place. It’s not a place to commit a robbery,” another man commented.

According to the recent Post article, prosecutors from the Southern District of New York asked a judge to sentence Sutton to up to 14 years behind bars.

Assistant U.S. Attorney Alexander Li wrote the man’s lengthy criminal history and how the robbery was carried out favored a long sentence.

However, Sutton’s attorney argued the man had suffered throughout his life and was physically abused as a child. According to the Post, he pleaded guilty earlier this year and faces sentencing next week.

Most recently, three suspects are accused of smashing into a Park Avenue jewelry store in New York City and reportedly got away with over $500,000 worth of items.

Meanwhile, the rise in violent crime across President Joe Biden’s (D) America is emerging as the deciding issue for voters in the fast-approaching midterm elections, Breitbart News reported October 5.

“A Politico poll released Wednesday found that 77 percent of Americans believe violent crime is a significant problem in the country,” the outlet said, adding Americans also believe increasing police funding was one of the best ways to fight the crime wave sweeping the nation.