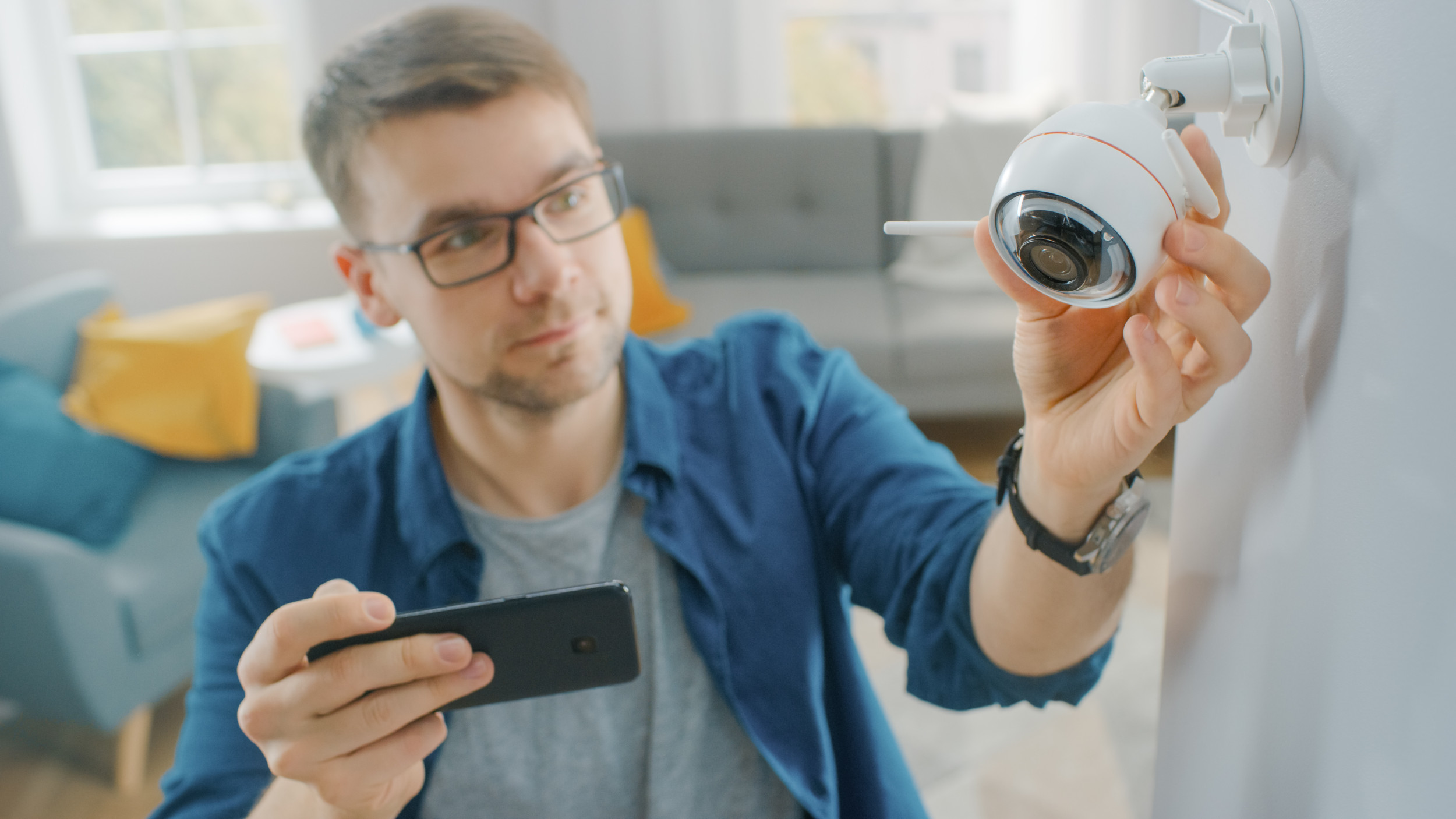 A husband was criticized online for demanding that the living room security camera remain on, even when his wife was alone, despite her requests otherwise.

The woman, who told Newsweek to identify her as “Claire,” shared her story to the popular Reddit forum r/AmITheA**hole. She earned over 5,700 upvotes and 1,300 comments for her post, “AITA for turning off the living room video camera when I’m home alone or I’m hanging with my kids?”

Claire says that she’s been married for over 10 years. About four years ago, they bought a new house together and decided to get a security system along with it. The security system came with an indoor camera, set up in the living room.

“While I liked the idea of having it monitor for movement when we weren’t home/sleeping, my husband wanted it on all the time, even while we were home. This made me somewhat uncomfortable but I came around to the idea,” Claire wrote.

She says that when they got the camera, their children were only 3 and 6 years old, and they were able to use it “almost like a baby monitor.” They also used the camera in other ways, she said, like using it to figure out when they put food in the oven if the timer wasn’t set.

However, as their kids have grown, the “baby monitor” function has become less needed. Claire says that a couple months ago, she was sitting alone while the children were at school, and “just kinda realized it’s weird” to have a camera monitoring her while she watched TV, and turned it off.

“I’ve mentioned multiple times that I don’t think we need the cameras on, but in retrospect I should have had a convo with him before turning it off. This made my husband upset. Now if I turn it off, he turns it back on,” Claire wrote.

Claire and her husband have since had many conversations about the camera. She argues that since the kids are older now, they don’t need to monitor them—adding that using a camera to prove whether or not they’re lying is “honestly is not the best parenting.” Her husband, however, wants the camera on all the time, even if everyone’s at home.

“He claims that me not wanting the camera on is not respecting him as head of the household and he will repeatedly turn it on anytime I turn it off. If he’s at home then he notices it’s off right away. If he’s at work he’ll turn it on in a few hours (no, it doesn’t notify him that it was turned off),” Claire wrote. “I feel like it’s weird and controlling. But I don’t have any other good reason for not wanting it on.

“He wants to still use it to monitor the kids and use to figure out what time something happened. Sometimes he’ll use it for things like helping the kids figure out where they put their book when they got home or something,” she added. “His opposition to me turning it off when I’m home alone is that then I don’t turn it back on, so there’s no footage if we ‘need’ to look back.”

In an update, Claire says she confronted her husband about turning the camera back on while she was alone, and turned it off during dinner. After that, her husband removed her access from the camera, and she can’t turn it off anymore.

Even in a marriage, privacy can be an issue. Sometimes a privacy violation is accidental, sometimes it’s in service of scoring points during an argument. But there’s a difference between someone finding something in their spouse’s pockets while doing their laundry and having an actual camera in the house watching their every move.

Kristin Davin, PsyD spoke to Newsweek about the situation. She said it was important to figure out why Claire’s husband wants the camera on—questioning in particular, “What is he in fear of that makes him ‘turn it on anytime he wants to?'” Davin said that his argument that the camera should be on to “respect” his role as “head of the household” over his wife’s unease, “seems to demonstrate a lack of respect on his end for his wife’s desires.”

“Again, if he is controlling (sounds this way) that anything that bodes in the opposite direction of his values/gender norms (based on what he says) will be deemed disrespectful,” Davin told Newsweek.

“Anytime one member of a couple ‘feels weird’ or ‘uncomfortable’ with a request from their partner, they have a right to stand their ground. The ‘head of the household’ argument doesn’t fly as in a true partnership, there is mutual respect and honoring of the other’s needs,” Degges-White told Newsweek.

“By recording, he is violating his wife’s normal desire for privacy in her own home. While there’s the argument that hidden video recording in public spaces, such as living rooms, kitchens, etc., is not illegal while recording in the bedrooms and bathroom is absolutely illegal, this is not the argument for recording that this husband might think it is. If his wife is against being recorded in her own home, her wishes should prevail as it’s a matter of privacy and no partner should be comfortable forcibly crossing their partner’s boundaries,” she continued.

Both Davin and Degges-White agreed that the two needed to have a serious conversation about why Claire’s husband insists on having the camera on.

“This is a challenging situation and one that needs a deeper conversation as to why he is adamant about keeping it on, despite her wishes to turn it off. It sounds/appears to be very intrusive on his part,” Davin said.

Degges-White added that though her husband may have “totally innocent” reasons, it looks bad for him to ignore her wishes.

“While the recording may be for totally innocent purposes, such as finding the book that was misplaced, the optics of this desire for total surveillance suggest there’s some other factor that is motivating that partner. Respect is a two-way street and asking someone to be under observation when they’re in their own home seems like a serious control issue and a lack of respect for a partner’s boundaries,” she told Newsweek. “We should all have a right to privacy in our own homes.”

Redditors agreed that Claire’s husband was in the wrong.

“[Not the A**hole]. And you should probably be paying more attention to the massive red flag that is ‘the head of household’. Those are the words of someone that doesn’t value you as an equal partner in your marriage. Not sure what your work situation is, but the non-paid domestic work of women needs to be recognised and regarded equally with the financial contributions made,” u/LoubyAnnoyed wrote in the top-rated comment with over 16,600 upvotes.

“He’s disrespectful to you for calling him the ‘head of the household’. He’s being gross and controlling,” u/queenofwasps wrote. “I don’t see any reason why you can’t still use it to check on the kids but that’s for when you aren’t around. Not for just watching shows and already supervising the kids.”

“[Not the A**hole] – He’s the ‘head of the household’ so what are you? Sounds like you are not viewed as an equal thus your needs, opinions and requests are not important and carry less value than his,” u/DesertSong-LaLa wrote. “His request is odd. It reeks of control, the need to find fault…is he a strong authoritarian figure to you and the kids? He needs to learn to set a timer for food and find parenting strategies that do not involve filming that leads to ‘justice’. I’m concerned you needed to reach out. Best to you.”

“I think it is weird and controlling for him to push back. My husband expressed similar feelings to me when I got indoor cameras for our travels, and so I can watch our cat,” u/landocked_mermaid_ wrote.

“He had a point. If I don’t, I kind of overhear him on calls, can see what he’s doing on his phone, and know he’s definitely napping instead of emptying the dishwasher. So I turn it off when he arrives home,” they continued. “Sometimes he texts me to turn it on so I can see the cat snuggling on him, but otherwise a little privacy is definitely reasonable. [Not the A**hole]”