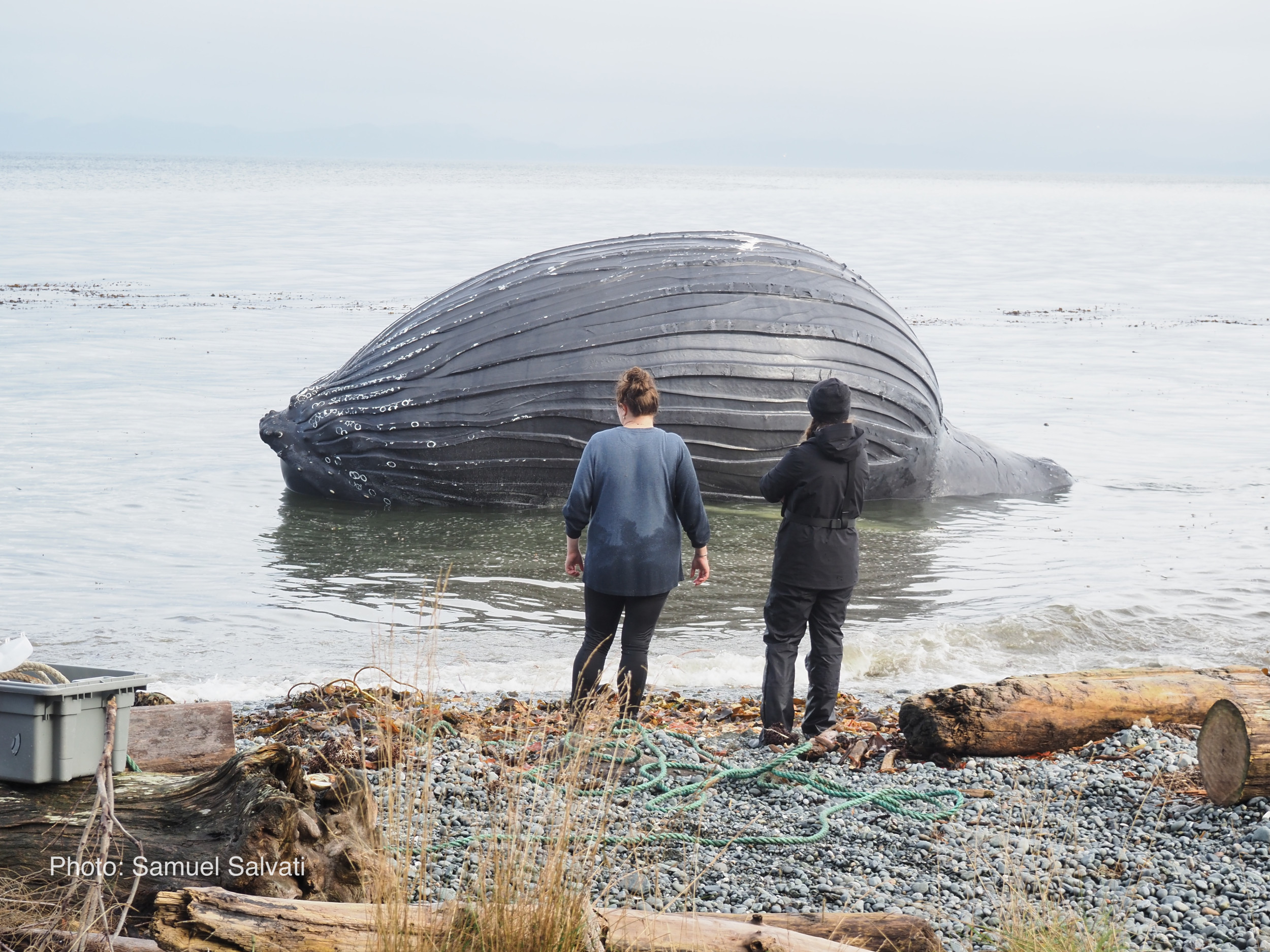 A ballooning whale carcass has been found on the north side of Malcolm Island in British Columbia.

The young female humpback, called Spike, has no apparent external injuries and rescuers are unsure of her cause of death.

“The inflation of Spike’s body is completely normal,” Jackie Hildering, humpback researcher and communications director at the Marine Education and Research Society (MERS), told Newsweek. “It is caused by gas created by decomposition inside the body of the animal…Eventually this gas will find a way to escape and the body will deflate.”

Usually, this deflation is brought about by the slow release of gas from small tears in the whale’s skin. But very occasionally, the whale’s skin keeps on stretching like a pumped-up balloon. And as with balloons, the gas can eventually stretch the skin to breaking point.

Such an incident was reported in Taiwan in 2004 when a 60-ton sperm whale exploded on a busy street in Tainan. Buildings and passersby were showered in blood and entrails, and the stench was unbearable.

Thankfully, Spike does not appear to be at risk of exploding any time soon.

“By yesterday evening, the distended belly and throat of this whale had already gone down compared to earlier photos,” Hildering said.

As the gas escapes, the whale may begin to sink to the ocean floor.

“We secured Spike to the beach so a necropsy could be performed to try and determine the cause of death,” Hildering said.

“Just like a human autopsy, the body and internal organs [will be] investigated to look for clues. This often includes looking at overall body condition, for evidence of injury, investigating stomach samples, and…to look for diseases, parasites, or other conditions.”

It is difficult to say exactly how many whales die in British Columbia every year. “Dead whales most often sink and thereby stories of their deaths are often not known,” Hildering said. “The coastline of British Columbia is so vast that even when a dead whale does wash ashore, the body may not be detected at all or not soon enough before decay limits the possibility of determining cause of death.”

That said, human activities are likely to have a significant influence on these statistics.

“Results from our preliminary research, conducted in partnership with Fisheries and Oceans Canada, suggests that about half the humpback whales off the coast of British Columbia have scarring from entanglement,” Hildering said. “Similarly, there are humpbacks with scarring from boat propellers.

“They are [just] the survivors—we do not know how many have died and sunk to the bottom of the ocean.”

Despite these fatalities, humpback whale populations have increased in recent decades.

“The last 20 years have seen a significant increase in humpback whale numbers off the coast of British Columbia due to population recovery after depletion by commercial whaling,” Hildering said. “The increase is believed to be too large to just be from population growth—the humpbacks are likely also shifting from somewhere else, possibly due to climate and/or prey.

“Research groups, including MERS, have documented their comeback through regular monitoring and cataloging of individuals. By identifying and monitoring individuals, we learn about their life history, behavior, and unfortunately the threats to their survival. “

As whale populations increase, their risk of encounters with humans becomes increasingly likely.

“Humpback whales are threatened by collisions with vessels, entanglement in fishing gear and other marine debris, changes to their food supply, and noise,” Hildering said.

“Many mariners are not aware of the need for increased vigilance; that humpback whales and other baleen whales are often oblivious to the presence of boats—they do not have biosonar in the way of toothed whales like Orca; they can be resting just below or at the surface; and they often travel in very unpredictable patterns in their search for food.”

The society has now launched a campaign—”See a Blow, Go Slow”—to spread awareness and share resources on how to avoid collisions with marine mammals.