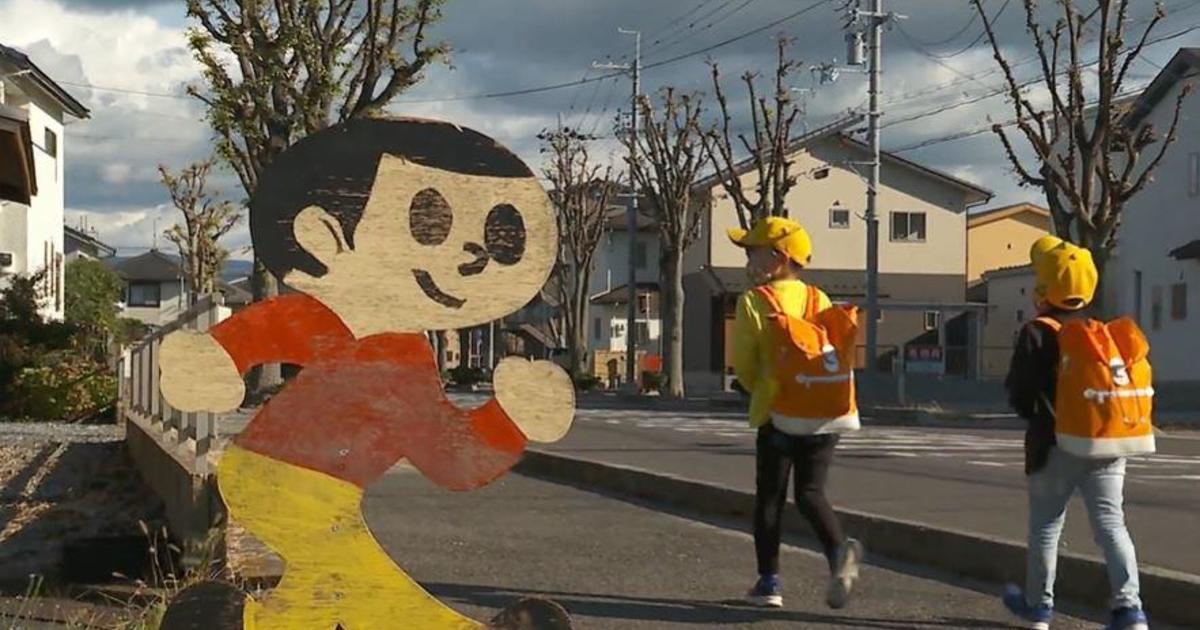 Higashi-Omi, Japan — He’s a familiar face on Japanese residential roads — a cherubic yet intense cartoon boy, with helmet hair and enormous beady black eyes, body tensed and ready to dart out into traffic. Known as tobidashi-boya, literally “run-out boy,” the whimsical, cartoony signs have become the go-to line of defense for towns and PTAs looking to protect pint-sized pedestrians on residential streets.

“Running Boy” was born in 1973, when road fatalities in Japan had soared to an all-time high. The social welfare office of Higashi-Omi, a city of about 100,000 outside Kyoto, asked a local sign maker for low-cost ideas, and in short order, plywood Running Boy signs were sprouting up along school routes, recalls Yoichi Masami, manager of the city’s social welfare office.

“Running Boy has been around for so long,” he told CBS News, “parents in areas without a Running Boy think, ‘we might be an accident waiting to happen!'”

Running Boy tribute versions soon followed, in plastic, made by hand, and in Running Girl versions, on streets across the country. But few localities can match the density of signs lining rights-of-way around the thoroughfares of Higashi-Omi.

The social welfare office now distributes dozens each year, some to replace decaying signs, which retail for as little as $40 apiece. Versions of Running Boy signs, localized and sometimes in senior-citizen images, dot roads across the country.

Running Boy has transcended his status as a traffic safety icon to inspire a raft of spinoff merchandise. Local noodle shops, dentist offices and other proprietors sport customized versions of Running Boy.

Over the decades, with the near-universal use of seat belts, airbags and sturdier vehicles, not to mention the installation of sidewalks, intersections and traffic lights, Japan’s once-treacherous thoroughfares have become among the safest in the advanced world, measured by passenger deaths.

According to the National Police Agency, all traffic fatalities dropped from 16,765 in 1970, to an all-time low of 2,636 last year. This year that figure is on target to decline even further. Even so, pedestrian and cyclist deaths here remain stubbornly high, accounting for about half of all road fatalities.

For all of Running Boy’s enduring popularity, there is no evidence the winsome signs work: A 2017 Ministry of Land, Infrastructure, Transport and Tourism report on residential road safety did not even mention Running Boy signs.

In the 2019 “Field Survey of the Current Conditions of ‘Tobidashi-Boya’ as a Traffic Safety Culture in
Shiga Prefecture,” Ritsumeikan University professor Keiichi Ogawa praised the signs, arguing that the process of ordering and installing signage helped raise awareness about traffic safety in and of itself.

But Hisashi Kubota, a professor in the infrastructure engineering department of Saitama University, north of Tokyo, told CBS News that “putting up safety alert signs honestly isn’t that effective,” adding that drivers quickly acclimate to the signs and tune them out. “But people think there are no alternatives. That’s why we still have so many pedestrian accidents.”

In the U.S. — where similar kid-shaped warning signs, available online, have spread widely across residential neighborhoods — traffic engineers have long argued that they are ineffective, and that altering infrastructure, such as narrowing roads at intersections, building roundabouts and bike lanes and installing speed bumps, are the best methods of curbing aggressive driving.

Japan’s streets are already cramped, many barely wide enough for a car to slip through — remnants of an era when the main form of transportation was two legs — yet the country has begun to adopt “traffic calming” infrastructure modifications to get drivers to slow down.

Instead of fundraising for Running Boys, Kubota argued, communities should be pooling resources and moving full speed on traffic calming measures such as rising bollards and speed humps. The low-cost, vertical rubber obstacles have been proven to reliably lower driving speeds to about 20 mph — vastly reducing the chances of death in the case of a pedestrian collision.

“The only surefire way to slow drivers,” Kubota said, “is with physical infrastructure.”