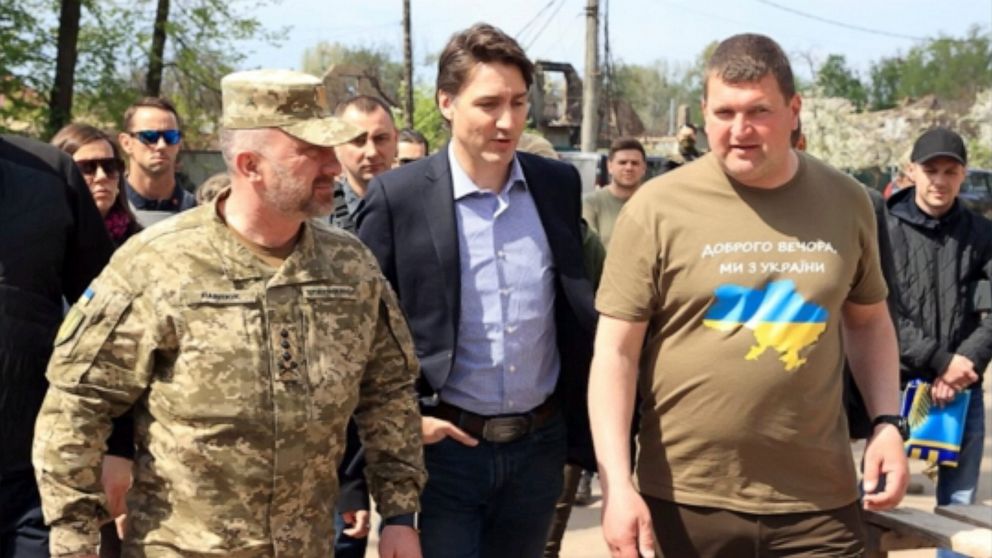 LONDON — British Prime Minister Boris Johnson, U.S. President Joe Biden and leaders from other Group of Seven countries were holding talks Sunday with Ukraine’s President Volodymyr Zelenskyy to discuss support for Ukraine and to display unity among Western allies on Victory in Europe Day, which marks Nazi Germany’s surrender in 1945.

Ahead of the call, U.K. officials said Britain will provide an extra 1.3 billion pounds ($1.6 billion) in military support to Ukraine to help the nation defend itself against Russian forces.

Canadian Prime Minister Justin Trudeau made a surprise visit to Ukraine, touring the northern town of Irpin, which had been heavily damaged by Russia’s attempt to take the capital of Kyiv at the start of the war. The mayor on Sunday posted images of Trudeau on social media, saying that the Canadian leader was shocked by the damage he saw at civilian homes.

Trudeau’s office later said “the prime minister is in Ukraine to meet with President Zelenskyy and reaffirm Canada’s unwavering support for the Ukrainian people.”

Jill Biden also made an unannounced visit on Sunday, holding a surprise Mother’s Day meeting in western Ukraine with first lady Olena Zelenska. Biden traveled under the cloak of secrecy, becoming the latest high-profile American to enter Ukraine during its 10-week-old war with Russia.

“I wanted to come on Mother’s Day,” the U.S. first lady told Zelenska. “I thought it was important to show the Ukrainian people that this war has to stop and this war has been brutal and that the people of the United States stand with the people of Ukraine.”

Marking Victory in Europe Day, German Chancellor Olaf Scholz said in a televised address that Sunday was “a May 8th like no other.”

He said Germany has worked hard to own up to its actions during World War II, reconciling with both Russia and Ukraine and committing itself to the concept of “never again.” But Russia’s “barbaric” invasion of Ukraine in February has brought war back to Europe, Scholz said, a prospect that once seemed unthinkable.

Scholz also spoke about Germany’s efforts to support Ukraine since the invasion, including sending heavy weapons.

“We support Ukraine in the fight against the aggressor,” he said. “Not doing so would mean capitulating to sheer violence – and empowering the aggressor.”

He said he understood some Germans’ concerns that the war could spread further west, but that while their fears are valid, “fear must not paralyze us.”

“I’m deeply convinced: (Russian President Vladimir) Putin will not win this war. Ukraine will survive,” he said. “Freedom and security will prevail — just as freedom and security triumphed over lack of freedom, violence and dictatorship 77 years ago.”

German Bundestag President Bärbel Bas, the second highest-ranking German official after the president, met Sunday with Zelenskyy in Kyiv and attended a memorial event honoring the anniversary of the end of World War II. German Foreign Minister Annalena Baerbock is also expected to visit in the coming days.

“We really appreciate that on the Day of Remembrance and Reconciliation itself, and in what for us is such a trying time of war, the President of the German Bundestag Bärbel Bas came to support Ukraine,” said a post published Sunday on Zelenskyy’s Telegram channel.

Ukrainian Prime Minister Denys Shmyhal posted a photo of himself shaking hands with Bas on Twitter. He wrote that Ukraine is counting on Germany’s support to recover Ukraine and join the European Union’s 27 nations.

Croatia’s prime minister was also in Ukraine on Sunday following reports that a Croatian citizen fighting in Mariupol was captured by Russian forces. The Croatian government said the visit by Prime Minister Andrej Plenkovic presented “an expression of solidarity and support” with the Ukrainian leadership and the people.

Follow all AP stories on the war in Ukraine at