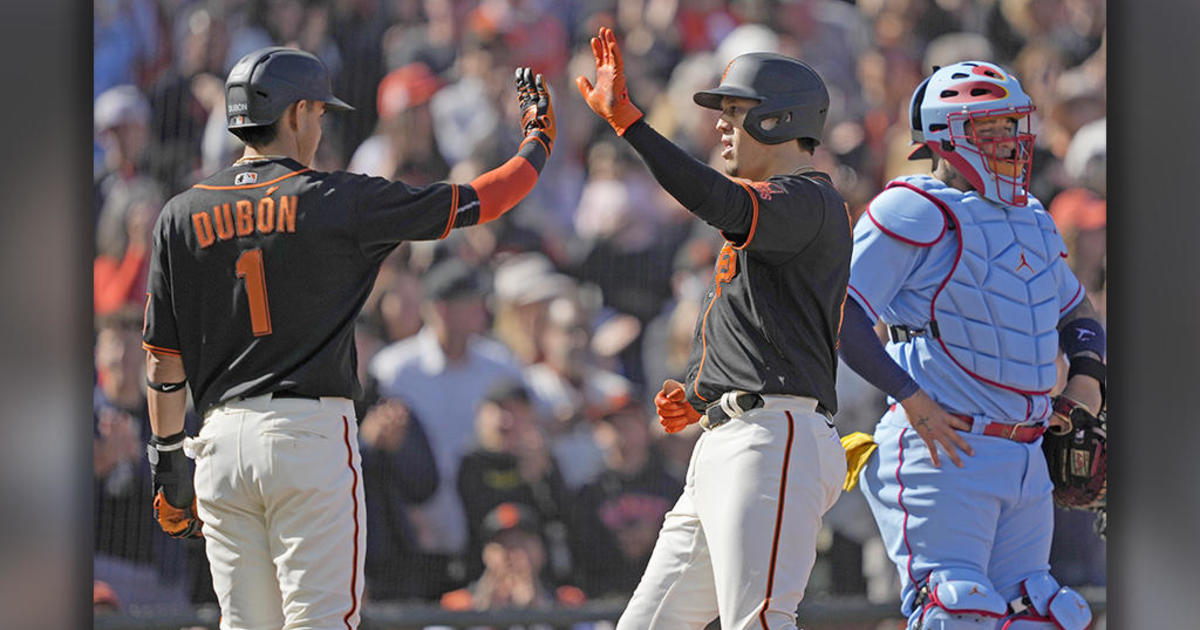 SAN FRANCISCO (AP) — Wilmer Flores hit a grand slam in the first inning and matched his career high with six RBIs as the San Francisco Giants snapped out of their offensive funk and beat the St. Louis Cardinals 13-7 Saturday night to end a five-game losing streak.

Logan Webb (4-1) struck out seven in five uneven innings to remain unbeaten in his last 17 starts at Oracle Park. He allowed four runs and eight hits while pitching around traffic most of the afternoon.

San Francisco had scored a total of five runs in its previous four games before jumping on Steven Matz (3-2) for three home runs in the first two innings.

Flores’ first grand slam since 2017 erased a 1-0 deficit and came after Matz walked two of the first three batters. Flores also had a sacrifice fly in the fourth and a bases-loaded walk in the eighth.

Dubón and Ruf each hit two-run drives in the second inning.

Matz was rocked by the Giants in his shortest outing of the season. The Cardinals left-hander allowed a career high-tying eight runs and five hits in three innings, raising his ERA to 7.01.

Molina’s single in the second made him the eighth primary catcher in MLB history to reach 2,000 hits and 1,000 RBIs. The last to do it was Iván Rodriguez, who retired following the 2011 season.

Former Giants manager Bruce Bochy and home run king Barry Bonds were among those in attendance honoring Posey. Also on hand were former teammates Hunter Pence, Brian Wilson, Matt Cain and Bengie Molina, whose trade to the Texas Rangers in 2010 cleared the way for Posey to become San Francisco’s full-time starter behind the plate.

Molina wore a No. 28 jersey and thanked Posey for getting him a World Series ring, which the team awarded to Molina after its 2010 championship run. Molina then asked for, and received, a hug from Posey and had the five-time Silver Slugger autograph the jersey.

A lifetime .302 hitter who had 158 career home runs and 729 RBIs, Posey thanked the crowd and his former colleagues.

Cardinals: RHP Jack Flaherty (right shoulder) threw in the bullpen before the game for the first time since being shut down and going on the Injured List in spring training. … RHP Drew VerHagen was scheduled to make his second rehab appearance with Triple-A Memphis on Saturday night.

Giants: 1B Brandon Belt left in the eighth inning after appearing to injure his left shoulder or neck swinging at a pitch. Belt had come off the COVID-19 IL before the game. RHP Dominic Leone also returned from the COVID list. IF/OF Jason Vosler and RHP Sean Hjelle were optioned to Triple-A Sacramento.