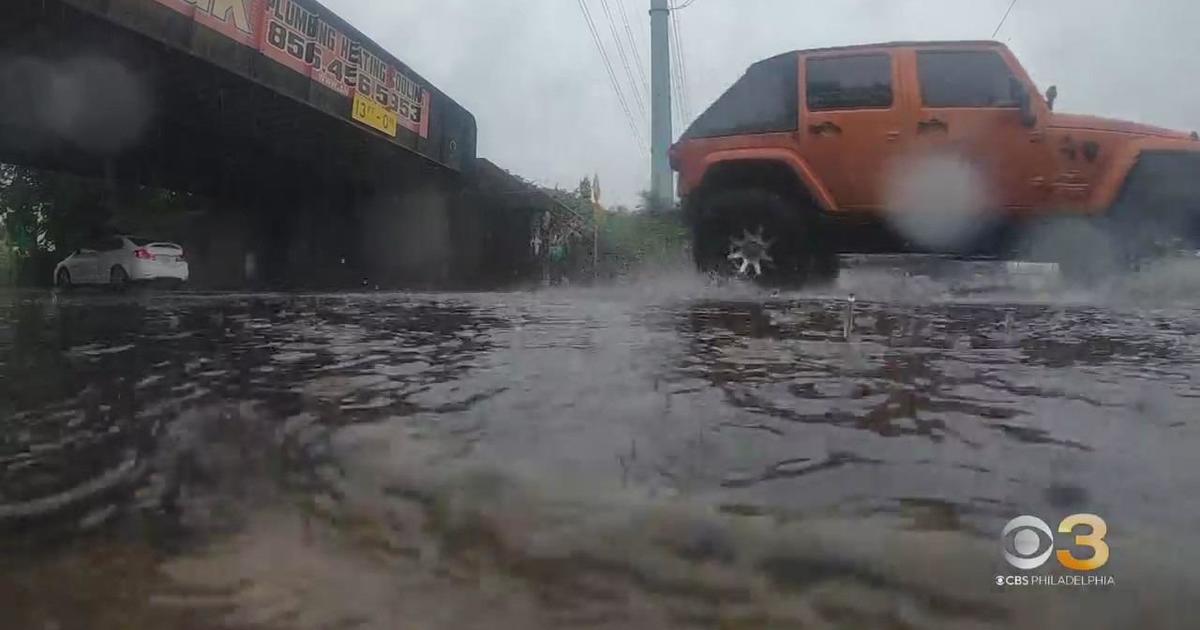 BROOKLAWN, N.J. (CBS) — The Eyewitness News Mobile Weather Watcher was on the road Tuesday as heavy rain pours over the region. Some of the heaviest rain moved through South Jersey this afternoon and near the western shore of Margate the flooding recede after water reached up to knee level earlier in the day.

While some people were out catching waves and enjoying the ride of their lives, others dealing with having less fun.

“We’re just ripping and riding on our boogie boards, having fun,” Chris said.

Meanwhile, Anthony Guanilo was trying to get to work.

“I didn’t think it would be as deep because I saw a bunch of other cars pass through,” Anthony said.

As CBS3 helped move his car away from the road, he hopes other drivers won’t make the same, potentially expensive, a mistake he made.

Despite watching a vehicle being pushed out of the way, more drivers still attempted to get through.

Richard Koff lived here for 15 years and he says they get flooding like this at least once a year and every time drivers don’t learn their lesson.

“Actually stopping before they even enter they come down, they get into the middle of the intersection, they stop and the water just goes up inside the engine and it’s done,” Richard said.

Resulting in cars needing to be towed, but until then, the cars are manmade obstacles for Chris and his Boogey boarding friends.

A Tornado Warning was issued along the Jersey Shore in parts of Cape May County but has since expired. There are no reports of a tornado touching now at this time, but the storm cell that moved through that area was capable of producing them.

CBS3 was also in Brooklawn this afternoon.

Our cameras caught flooding in between two traffic circles that deceived drivers on how deep it was until they were moving through it.

No issues or serious damage have been reported in Camden and Gloucester Counties, but flooding is expected in low-lying areas.

There has been some traffic on Route 42 and PATCO is experiencing some delays.