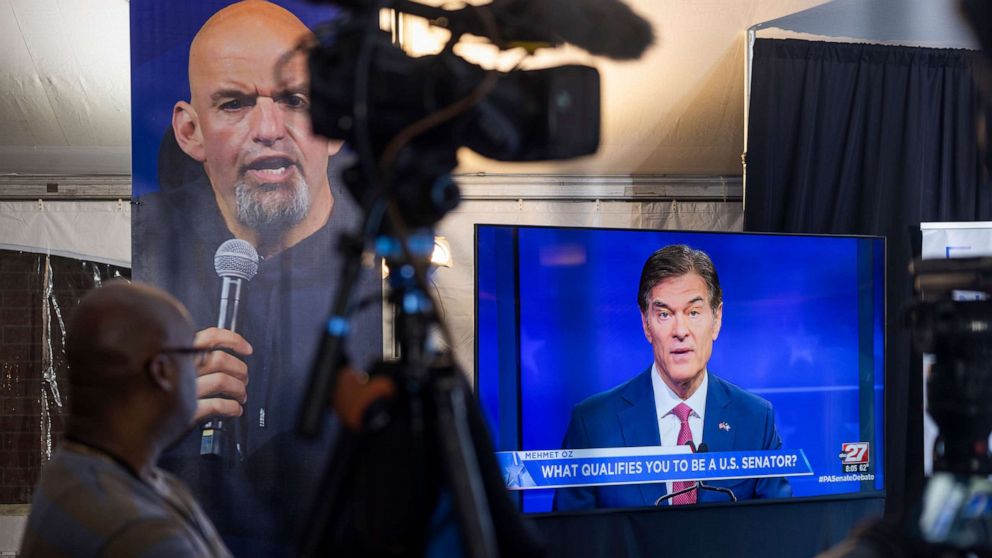 The highly anticipated debate in the Pennsylvania’s Senate race began Tuesday night — the only time this fall that Republican Mehmet Oz and Democrat John Fetterman will share a stage, as they each vie for a seat that could tip the balance in Congress’ evenly divided top chamber.

The debate is hosted by Nexstar and broadcast across Pennsylvania beginning at 8 p.m. ET.

Considerable attention is on Fetterman’s health: The lieutenant governor suffered a stroke in May that sidelined him for three months and left him with lingering symptoms, including halting speech and auditory processing issues.

Fetterman has monitors on stage to transcribe words in real time.

During the ongoing debate, he and Oz sparred on abortion access, inflation and the minimum wage and Fetterman’s fitness to serve — and whether he or Oz, a former surgeon and popular TV host, was running the more sincere campaign.

On abortion, Fetterman said he wanted to revive and codify into law the nationwide abortion guidelines under Roe v. Wade, which the Supreme Court struck down this summer.

Oz said he wouldn’t support a federal abortion ban — which some other Republicans have called for. He has described himself as “pro-life” and supports restrictions abortion with a few exceptions, saying that by contrast Fetterman supported tax-subsidized abortion even into the final trimester. On abortion and other issues, he described Fetterman as “radical.”

Fetterman insisted he supported Roe’s guidelines, no more and no less, and should be the candidate chosen by voters who support a woman’s personal choice.

Oz rebutted Fetterman, who sought to label him as actually more extreme on abortion than he was saying on stage: Fetterman cut into Oz’s time to link Oz to gubernatorial nominee Doug Mastriano. Oz called Fetterman’s tactics “fear-mongering.”

Fetterman accused Oz of frequently lying, both on the debate stage and in his TV career, calling it the “Oz rule.” Oz later pushed back that one of Fetterman’s ads against him had been pulled for being “dishonest” while his campaign had no such penalty.

Elsewhere, Fetterman said he supported a law to raise the state minimum wage to $15 an hour, more than double its current rate. Oz said he wanted the minimum wage even higher than that, but driven by market forces via a plan to “unleash” the state’s energy industry.

As the debates continue, the candidates are likely to discuss public safety, immigration and more.

Polls have narrowed considerably, with FiveThirtyEight’s average now showing Fetterman ahead by less than 3 points, down from nearly 11 points six weeks ago.

This is a developing story. Please return for updates.