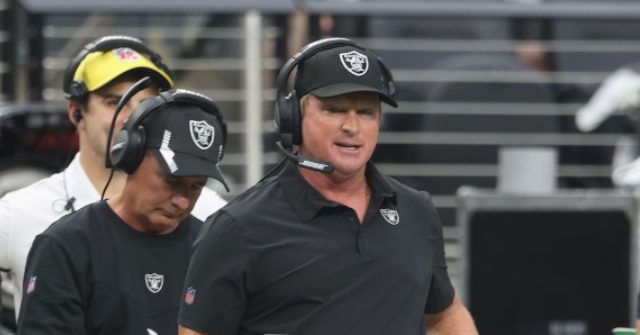 Rison told TMZ Sports that “no one is God” and no one is perfect, and he thinks Gruden’s behind-the-scenes conduct should be forgiven.

Gruden resigned from the Raiders last October after private emails containing controversial comments were leaked to the media. The emails in question contained racial and misogynistic comments.

But Rison thinks people are not given enough leeway these days.

“For some reason in today’s time, everybody think they’re God now because social media and whatever other platforms that they can voice their opinions,” Rison said. “God gave him the gift to coach and it’s up to him and God if he repents, and forgives for his negatives and his faults and his defaults, I have no problem with it.”

Rison played for the Raiders with Gruden as his head coach during the 2000 season and said that he never saw or heard Gruden act improperly towards anyone. Rison added that he doesn’t think Gruden is a racist.

“For him to be a racist, if he was a racist, he darn sure gave a lot of black athletes chances and opportunities to put food on the table for their families,” Rison insisted.

Gruden never tried to defend the content of his emails and admitted the words were “shameful.” But last week, during an appearance at Arkansas football’s Little Rock Touchdown Club, he said he wished he could “get another shot” at coaching.

Jon Gruden at the Little Rock Touchdown club commenting on the emails that ended his NFL coaching career. pic.twitter.com/1ClcWtdTRn