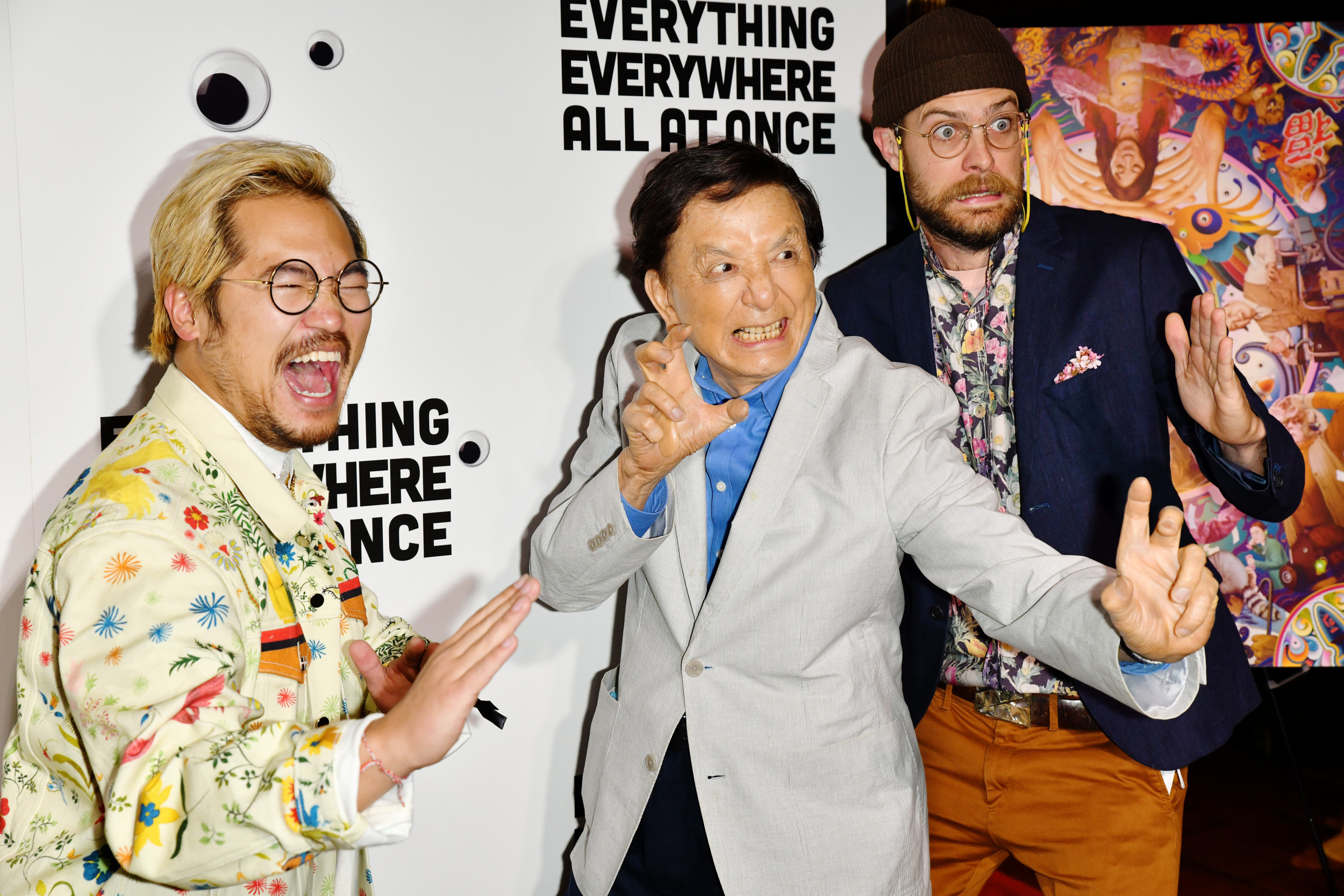 Creating Everything Everywhere All At Once was a long, emotional task, but there’s a chance the Daniels may go through it all again for a sequel.

That’s what the writing-directing duo Dan Kwan and Daniel Scheinert told Newsweek in an in-depth conversation about their massive hit movie. The band Son Lux produced the mammoth 49-track score for Everything Everywhere All At Once too and they discussed the moments that made them break down in tears during production.

Michelle Yeoh stars as the lead character Evelyn, a dissatisfied launderette owner who has her mind awakened to the possibilities of her multiversal selves. Stephanie Hsu, Ke Huy Quan, James Hong and Jamie Lee Curtis also star in the multi-genre movie that is filled with surprises.

“In our work we’ve discovered that we really like combining tones,” Scheinert, one half of the Daniels duo, told Newsweek. “Transitions are fun, but also like unexpected explanations can kind of get past story barriers.”

“It’s more truthful to our existence in reality,” Kwan added. “It’s a mix of constantly having like a barrage of different tones and experiences. That emotional whiplash is something we wanted to capture.”

Everything Everywhere All At Once is the Daniels second feature movie, after the 2016 indie hit Swiss Army Man where Daniel Radcliffe starred as a flatulent dead body.

The Daniels switched off from other multiverse-focused stories while writing their own script. They’ve gone on record stating they ignored things like Spider-Man: Into the Spider-Verse and Rick and Morty just to be safe.

“it just didn’t help our writing process,” Scheinert said, “You get neurotic about where there will or won’t be overlap.”

“Those other films paved the way, we can’t complain.” Kwan said, “There’s a much better understanding in the culture now. We were naive enough to say we’ll build a foundation of the multiverse, then we’ll smash through it, all in one film.”

Everything Everywhere is continuing to roll out across cinemas worldwide, and has so far been met with incredible acclaim from audiences and critics alike. The reviews are in and it still maintains an impressive 96% on Rotten Tomatoes and at the time of writing, it is the 50th best ranked movie of all time on IMDb. It’s the highest rated 2022 movie on the site.

While it moonlights as a frolicking, wacky, sexy, silly, ambitious sci-fi movie, the central story is an emotional family drama. The unexpected emotion of Everything Everywhere All At Once is something which continually affected the band Son Lux.

“I was tasked with scoring the very intense, emotional moments,” band member Rafiq Bhatia told Newsweek, “And I think I cried every time I watched it. I cried all 397 times. It really took a lot out of us.”

Son Lux, an experimental American band, is made up of Bhatia, Ryan Lott and Ian Chang. Individually and together, they created the 49-track score of the movie with a little help from the likes of Randy Newman, Andre 3000, yMusic and Moses Sumney. The lead single from the movie, “This Is a Life,” which also opens and closes the movie, is a melancholy track featuring Japanese-American singer Mitski and David Byrne from The Talking Heads.

“The whole movie sat with us. We were scoring it and texting each other like ‘y’all, for some reason this one just got me and I’m a mess over here,'” Lott recalled. “

He continued, “This movie engages your heart in a very surprising way. By the end all of this sort of madness and insanity and humor and absurdity culminates in a giant hug. It was our task to make sure we were hitting all emotional notes along the way with the score.”

The reaction to the lead single, which Son Lux wrote with the help of Mitski and Byrne (though it was all over Zoom) has been overwhelmingly positive according to the band, though surprisingly emotional too.

“I think the response online has been a lot of people just like, ‘What the hell, like, I was already crying enough and then this song comes on,'” Chang laughed.

Everything Everywhere All At Once is a two-hour self-contained story that could be neatly wrapped up and left alone. However, as the filmmakers admit, it’s always tempting to unwrap the box.

“It’s a great question that we’ve been debating since we finished this film honestly,” Kwan said. “How do we progress from here? Because in a lot of ways, this film is a culmination of everything we’ve been doing with our style as music directors, and this feels like, you can’t go much bigger than this, or as far as what we’ve been trying to pull off.

“We’re developing projects, both things that feel very different, because we’ve moved on as creative people just to exercise other parts of our skill sets, but at the same time, there’s a lot of stuff that we had to cut from this movie, a lot of concepts and ideas and characters that we really want to continue exploring,” Kwan said.

The fans who’ve reacted so positively to Everything Everywhere All At Once are at the forefront of the Daniels’ minds, and could be rewarded with a follow-up or sequel of some sort.

“Now that we have this audience, and some fans, people are now watching us, which is really scary and exciting, okay, what can we do with this opportunity? We want to make sure that when we look back on this time when we made the right decisions, and also made the most of this moment. Because we know this is very rare, special moment, and who knows if we’re ever going to do this again?” Kwan pondered.

So what do the Daniels think will be next: another original project or a sequel? “We’re doing both to answer your question,” Kwan said. “We will see what happens. We’ll see what the universe greenlights first, but we’re actively exploring all of it.”

The sci-fi action comedy drama Everything Everywhere All At Once is out in movie theaters now.