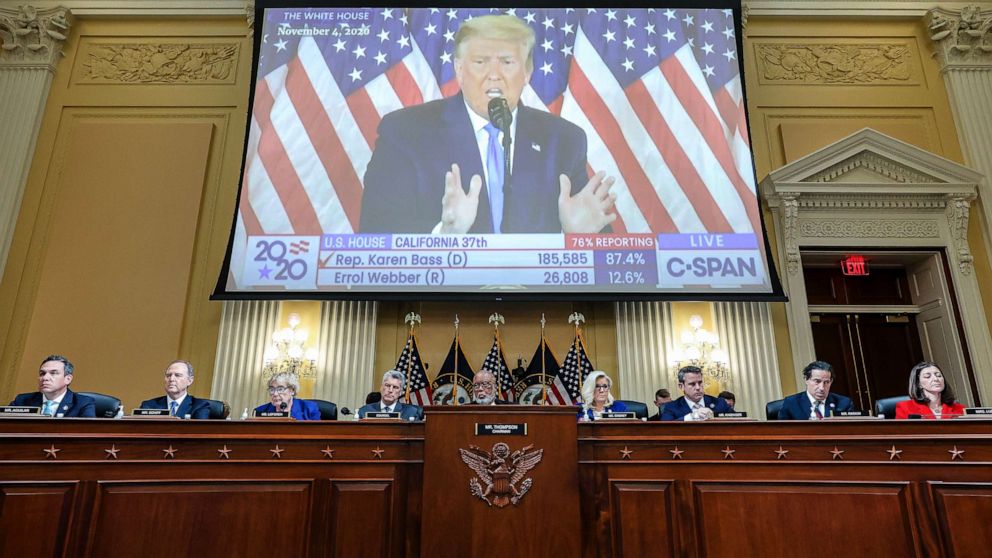 The House Jan. 6 committee, in its last scheduled hearing, warned that those involved in what they called the attempted coup must be held accountable or history could repeat itself.

“With every effort to excuse or justify the conduct of the former president, we chip away at the foundation of our republic. Indefensible conduct is defended,” chair Bennie Thompson, D-Miss., said as the panel gaveled in on Oct. 13. “Inexcusable conduct is excused. Without accountability, it all becomes normal and it will recur.”

But has the committee succeeded in swaying public opinion? And will that be a factor in the midterm elections?

Polling indicates overall views have not changed much even after 10 public hearings — nine since June — in which the committee presented damning evidence about a plot to overturn the 2020 election.

Rep. Liz Cheney, R-Wyo., the vice chair of the committee, has told ABC News she’s working to “ensure that we do everything we can not to elect election deniers.”

At the center of the plot, committee members said, was former President Donald Trump. Trump was subpoenaed by the committee last week to produce documents and appear for testimony next month.

“That kind of drama is the stuff of history,” Ray Smock, a former historian of the U.S. House of Representatives, told ABC News.

Despite the made-for-television hearings, views on the Capitol attack and on Trump have remained consistent over the past several months.

A poll conducted by ABC News/Ipsos in mid-June, after three of the committee’s hearings, found 58% of Americans believed Trump bore a good or great deal of responsibility for the Jan. 6 attack. That number was unchanged from a poll ABC News and Ipsos conducted in January, well before the hearings began.

Just 9% of Americans said they were watching the hearings “very closely” while 36% said they weren’t following the events closely at all, the June survey showed. This was despite most Americans saying the committee was doing a fair and impartial job.

And while Trump undoubtedly has been the focus of the Jan. 6 hearings, he remains a top figure in the Republican Party. An October ABC News/Ipsos poll found 64% of registered Republican voters think Trump should have a great deal or good amount of influence on the future direction of the party.

Republicans in Congress — besides the two members of the committee — Cheney and Adam Kinzinger — have also largely brushed off the panel’s work as a partisan exercise.

Trump acolytes, including candidates who support and spread his election lies, have succeeded up and down the ballot this November. According to FiveThirtyEighty, 199 Republican nominees running for office have fully denied the legitimacy of the 2020 election despite no evidence of fraud.

At the. same time, the ABC News/Ipsos poll shows 58% of independent voters say that if a candidate says they believe that the 2020 presidential election was stolen from Trump, they are less likely to vote for that candidate.

While Democrats have tried to make the threat to democracy a focus of the midterms, with President Joe Biden framing the 2022 midterms as a referendum on extremist MAGA Republicans, surveys show the economy, abortion and crime are the top issues for voters. A New York Times/Sienna College poll found that while voters overwhelmingly believe American democracy is under threat, few call it the nation’s most pressing problem.

The House Jan. 6 committee has more work to do, including releasing a final report on its findings and recommendations. The panel is expected to complete the report by the end of the year.

There’s also the overarching question of whether the Justice Department will take action after the committee wraps up its investigation.

It’ll be up to Attorney General Merrick Garland to decide whether to take legal action against Trump. Garland has vowed to pursue charges for anyone criminally responsible for Jan. 6 and the department’s made more than 880 arrests so far in connection with its investigation, but hasn’t made any public indications about Trump’s fate.

A prosecution could affect public opinion about Jan. 6, Smock said.

“The full verdict on the impact of this committee is yet to be felt,” he told ABC News.

“They made the case but their work stops at the water’s edge and it now becomes the executive branch, through the Department of Justice, that has to take this up. If the Department of Justice does not take it up sufficiently or adequately, then this hearing will have a different view in history — that whatever the committee did, it didn’t resonate.”