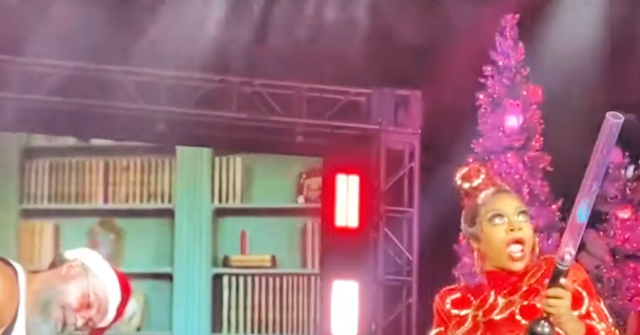 Florida’s Department of Business and Professional Regulation (DBPR) sent a warning to the Orlando Philharmonic Plaza Foundation Inc. ahead of Wednesday’s scheduled show of “A Drag Queen Christmas” at Plaza Live, instructing them to ensure that minors are “prohibited” from the event.

“It has come to the Department’s attention that you have contracted with Big Time Operator, LLC d/b/a ‘Drag Fans’ to offer the use of your licensed premises to conduct the ‘drag show’ performance,” the department wrote in the letter, citing reason to believe that the show features “exposure or exhibition of sexual organs, simulated sexual activity, and/or the sexualization of children’s stories.”

The department also noted that the shows have been “marketed to and attended by minors, including young children.”

Ultimately, the department warned that it is “your obligation to ensure that minors are prohibited from attending the Drag Fans drag show,” lest action be taken.

“If minors are allowed to attend this drag show, the Department will take any and actions available to ensure that you do not pose a threat to minors in the future,” it concludes:

The warning follows the department being made aware of the same drag show in Fort Lauderdale, prompting an investigation due to minors in attendance at the event.

The show, which is currently finishing up a national tour, does, in fact, simulate sexual acts and feature characters such as “‘Screwdolph the Red Nippled Reindeer.” Some videos from events in other parts of the country show the drag queens speaking to children during the sexually explicit event:

Screwdolph the Red Nippled Reindeer was performed at last night’s Drag Queen Christmas in Ft. Lauderdale with kids in the audience. Pretty much everything you saw on @TaylerUSA’s thread. pic.twitter.com/ssfe4zE8Nc

Mayor of Knoxville, TN attended “Drag Queen Christmas” which was open for “all-ages.”

The show is by a group on tour throughout the US. Their shows feature exposed buttholes, simulated sex acts, & oversized fake exposed breasts.

Elected officials are promoting this. pic.twitter.com/60rLNhrVGL

In this performance they simulated sex countless times, sexualized a child’s story, including Santa, and had sexual videos playing in the background.

When the host asked a child what his favorite part of the show is he replied “nothing”. pic.twitter.com/rmrkCb5eJ2

This Drag queen had a lot to say to children who were on the front row who were being given money by their mother to hand to the Drag Queens.

He engaged with two different children, a 9 and 10 year old.

“Are you having fun, are you enjoying it, are you confused yet?” pic.twitter.com/KydNKlJjND

This story is developing.