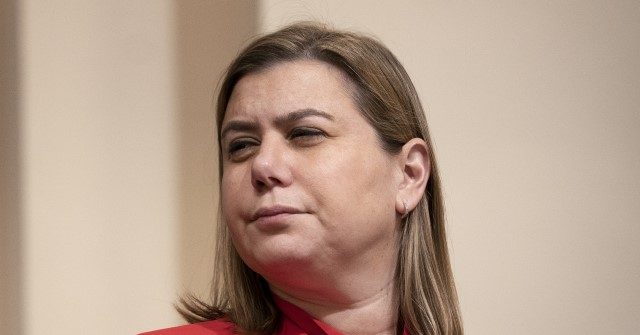 Barrett holds a two-point lead on Slotkin despite her having a significant advantage in name recognition. At the same time, Republicans hold an 11-point lead on the generic ballot, and Biden is 26 points underwater in the district he carried in his presidential run. Biden saw his latest approval rating at the lowest ever nationwide.

An internal poll from the National Republican Campaign Committee (NRCC), first reported by Politico, showed that Barrett leads the incumbent 46.1 percent to 44.6 percent, with 10.3 percent undecided.

However, the internal poll noted that Slotkin is sitting at under 50 percent on the ballot — which is the worse level she’s had since winning the seat in 2018 — even though she has nearly 100 percent name recognition.

Barrett, an Army veteran — whom Slotkin has attacked for training with the Army — was elected to the Michigan House in 2014 and then was elected to the state Senate in 2018. He showed a more significant lead after the poll did message testing — with in percent of decided voters  chosing him.

Democrat Elissa Slotkin Attacks GOP Opponent for not Campaigning; He was Training with the Army

Also, Biden’s job approval is underwater in the congressional district. Only 36.2 percent approved of Biden’s job as president, while a majority (62.5 percent) disapproved of him. There were only 1.3 percent who said they were unsure.

NRCC’s internal poll was conducted by Cygnal in Michigan’s Seventh Congressional District from June 14 to 16. The poll asked 400 people in the district and had a margin of error of plus or minus 4.70 percent.

Nationwide, on CIVIQS’ rolling job-approval average last Saturday, Biden’s approval rating went down to only 32 percent, the lowest in his presidency, with a 57 percent disapproval. Eleven percent of survey participants did not approve or disapprove.

But, overall, Biden’s approval rating is underwater in 48 states, including the typically dark blue California and his home state of Delaware. He has a net approval of negative 25 nationwide.