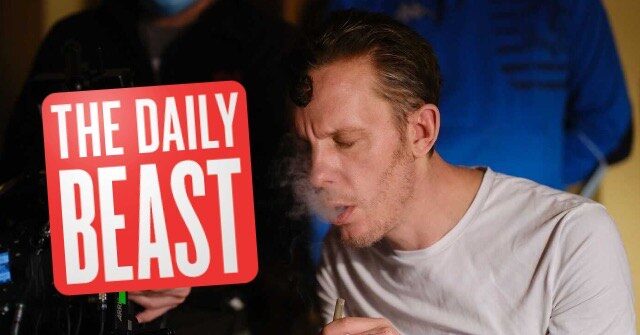 The Daily Beast — a far-left propaganda site that doxes private citizens and spreads conspiracy theories — and its unnatural obsession with My Son Hunter continued this week with yet another lengthy screed.

The proven liars and McCarthyites at the Daily Beast once again say they have seen the movie (this is review number two). For a site that claims to hate My Son Hunter, they sure do enjoy spending time with My Son Hunter or at least driving past My Son Hunter’s house 12 times a night.

Guess how this review turned out? “Both hosts give the film two thumbs down.”

The biggest complaint? “‘My Son Hunter’ Isn’t Even Fun to Make Fun Of,” reads the headline. I don’t even know what that means, and my Woketard to English Dictionary doesn’t either.

“It was across the board bad, but it was also so self-righteous it wasn’t really fun to make fun of,” [somebody named] Weill says. “I think the script was too thin so they had to pad it out with more ass shots of strippers and that sort of thing. Overall, I think this was a little derivative. The plot writing could have used a bit more.”

“The plot writing could have used a bit more.” Is that English?

Not that I agree with the premise, but few things are easier to ridicule than “self-righteous.” But when you are puffed up with your own self-righteousness (which is a requirement to work at the Daily Beast, as is a low testosterone level), you’re going to miss that particular target of opportunity. Or maybe the complaint is a lie. The Daily Beast is infamous for spreading lies.

Oh, and the Daily Beast says the movie “had to pad it out with more ass shots of strippers” as though that’s a bad thing.

Here’s what I think really worries them:

Yeppers. Don’t Worry Darling is one of the most high-profile movies around today, and all on our own, without any help from fascist Hollywood’s precious distribution infrastructure, Breitbart News proved fascist Hollywood’s precious distribution infrastructure could no longer discriminate against the truth. That’s right; you Nazis can no longer bottleneck production or distribution. Welcome to the revolution, eunuichs.

According to Sommer, My Son Hunter is, “as folks might imagine, not a positive take on Hunter Biden.” The setup, he says, shows Hunter Biden in the fall of 2019. He’s spending the night with a sex worker and relating all of his dirty dealings with her.

My Woketard to English Dictionary defines a sex worker as a “hooker.”

Naturally, no Daily Beast or any corporate media story about My Son Hunter would be complete without a hearty helping of laptop denialism:

“Then we get all these flashbacks to how the supposed laptop from hell revealed, whatever it supposedly revealed,” Sommer says. [emphasis added]

Even the far-left New York Times, Washington Post, and, CNN has been forced to admit the laptop is real, but these liars are deliberately misleading their gullible readers.

After all the lies, coordination, and working arm-in-arm with extreme-Left Big Tech right before the election, the Establishment Media FINALLY admits the bombshell Hunter Biden laptop is authentic.

Just another day at the low-T Beast.

Hunter Biden is the subject of a brand new narrative film, My Son Hunter, marking Breitbart’s expansion into film distribution. The film was directed by Robert Davi (Goonies, License to Kill, Die Hard) and stars Laurence Fox (Victoria, Inspector Lewis, The Professor, and The Madman) as Hunter Biden; Gina Carano (The Mandalorian, Dead Pool, Heist) as a Secret Service agent; and John James (Dynasty) as Joe Biden. It was produced by Phelim McAleer and Ann McElhinney (Gosnell movie, FBI Lovebirds: Undercovers) from the Unreported Story Society. The film is available RIGHT NOW for Streaming and Downloading at MySonHunter.com.

The trailer below has been viewed almost 5 million times across social media.