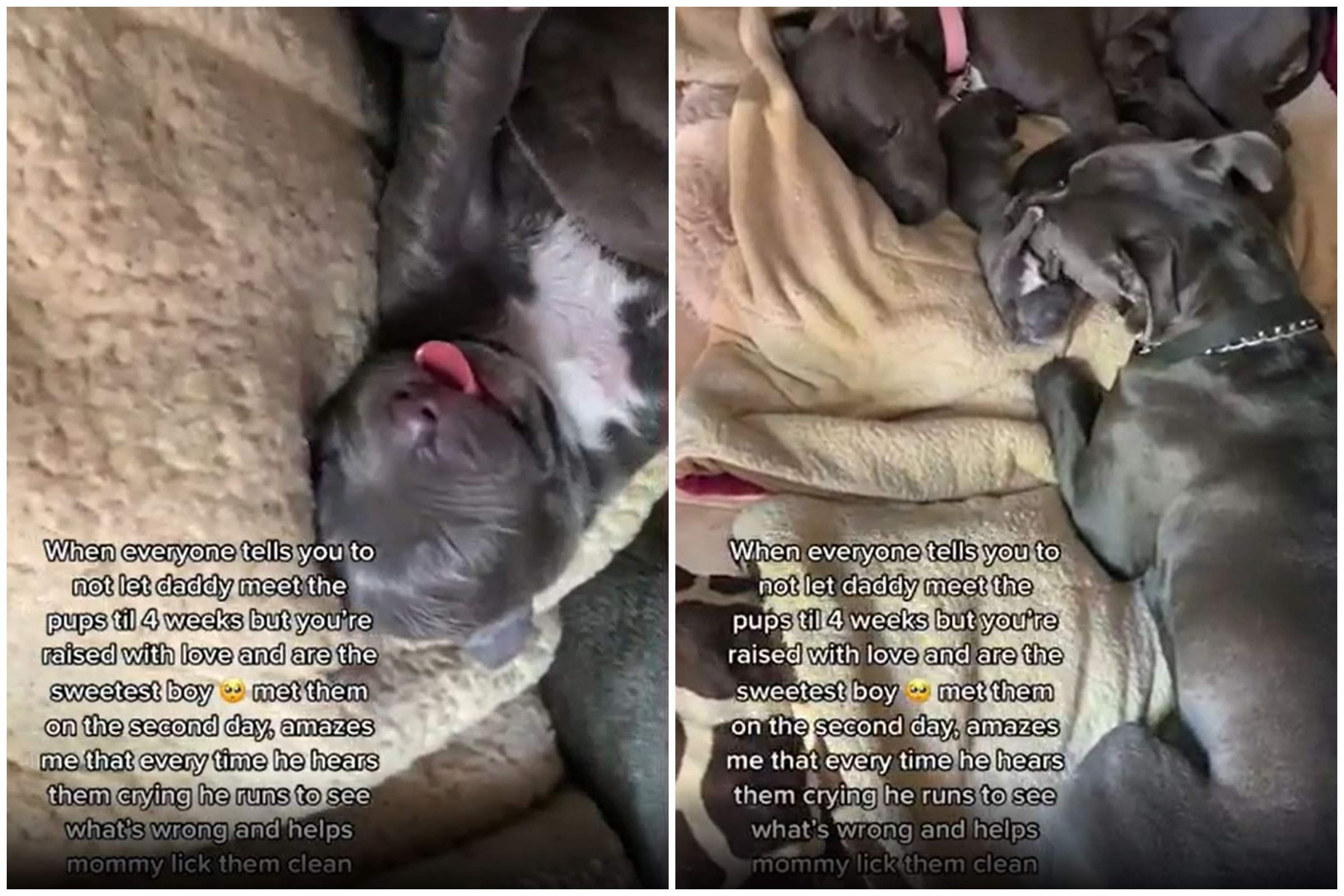 A clip of a daddy pit bull meeting his newborn puppies for the first time, when they’re just a few days’ old, is melting hearts everywhere.

Their owner, Stephanie, shared a clip to her TikTok page, @tu_muneca, last week, where she captured the proud new parents who had eight puppies in total.

Stephanie, from California, captioned the video: “When everyone tells you to not let daddy meet the pups until four weeks but you’re raised with love and are the sweetest boy.

“Met them on the second day, amazes me that every time he heard them crying he runs to see what’s wrong and helps mommy lick them clean.”

She explained more about her beloved pets, telling Newsweek they’re both blue nose pit bulls, with the mom named Blue and the dad called Kilo.

Stephanie stood by letting Kilo meet his puppies, now roughly a fortnight old, when they were still newborns, saying she made the decision “because he’s a super sweet boy and [I was] very confident he would be gentle enough.

“People are usually scared of how mom would react (aka get vicious), but both of my pit bulls are HUGE sweethearts.”

Kilo has taken to parenthood like a duck to water, as Stephanie beamed: “Yes he’s a very good dad. She said both parents were a year old, and noted “it’s their first litter, wasn’t planned,” but ultimately she was glad they had puppies.

After discovering the pair were copulating, Stephanie admitted: “I wasn’t happy at first because I was nervous about Blue being in labor and I kept an eye on them while they were in heat, but things happened quickly and I accepted it afterwards. They’re both great parents and the puppies are thriving.”

Kilo’s gentle nature was noted by TikTokers who commented on the video, with Joan Henchy writing: “Aw that’s lovely to see daddy helping with babies.”

Tanya Ryan thought: “If mamma is letting him near you know she trusts him, always trust a dogs judgment they are rarely wrong, beautiful fur family.”

Lilyen reckoned: “He’s a better dad than some dads I know. What a sweet boy.”

Sophijxdereplied saying: “This is so out of the ordinary and honestly so amazing you get to experience this I am so jealous.”

While Mydognameissadie pointed out: “Look how he holding his paws, he real gentle and he knows those are his babies.” To which Stephanie replied: “I didn’t even notice that. You’re right.”

And TMLC added: “Not me crying bcoz pittys get such a bad wrap, and he’s such a sweet boy.”

Stephanie is right in saying experts advise keeping dads away from puppies until they’re a little older.

The American Kennel Club (AKC) said: “It’s generally advised to keep the male away from the mother and litter entirely, from the last weeks of pregnancy and until the pups are at least four weeks old when the mother is starting to wean them, and ideally for five to six weeks.”

“By then, the father can be a part of the socialization process. When you do introduce them, do so gradually and always with human supervision.”

The chart below, provided by Statista, shows the most popular dog breeds in the U.S.

In the U.S., the most popular breed, determined by pet registration, is the labrador retriever, AKC statistics from 2020 show.

The breed held onto the top spot when compared to a 2010 list. Next most popular is the French bulldog, then the German shepherd, and golden retriever is fourth. Next on the list is bulldog, then poodle, beagle and finally rottweiler.

However, the AKC “does not recognize the ‘Pit Bull’ as a specific breed,” its website confirmed.

They have a somewhat negative reputation, with pit bulls, along with rottweilers, responsible for the majority of attacks against humans, a study from Centers for Disease Control and Prevention (CDC) spanning 1979-1996 showed.