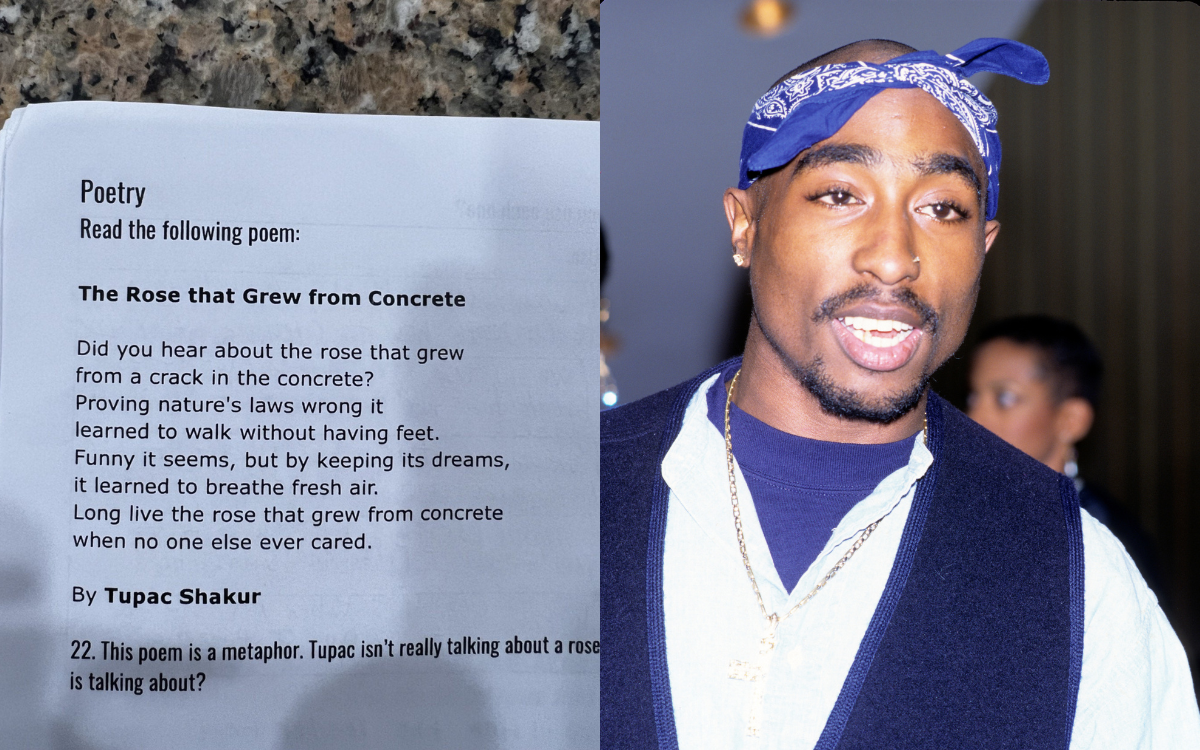 A dad has described feeling “surprised” and “excited” after discovering his son was being taught Tupac Shakur’s poetry in the 7th grade.

Alex Preston took to Reddit to share a screenshot of the assignment set by his son’s middle school English teacher asking pupils to read the Tupac poem The Rose that Grew from Concrete and analyze the metaphor behind the late rapper’s words.

One of the most popular and influential rappers of the 1990s, Tupac was fatally shot in a drive-by attack in Las Vegas, Nevada on September 7, 1996. He was just 25 years old.

A prolific lyricist who recorded four studio albums during a five-year spell, Tupac remained a prominent part of the music scene thanks to the mountain of unreleased material he left behind.

Many of these lyrics went on to feature in the six albums released following his death while an 83 GB computer hard drive containing unreleased Tupac photos and music was auctioned off last year.

But while Tupac’s legacy lives on through his music, the rapper’s impact continues to be felt in other ways too. For one English class at a school in Dallas-Fort Worth, Texas, it’s through his efforts as a poet.

Tupac studied poetry at the Baltimore School for the Arts in his younger days and later attended classes under the tutelage of writer and poet Leila Steinberg who later served as his manager and helped him earn a record deal.

The Rose That Grew from Concrete was one of several poems Tupac wrote as a 19-year-old. It was later published as part of a collection under the same name and serves as a metaphor for the human spirit and ability to overcome adversity in life.

Preston told Newsweek he shared a picture of the homework assignment as he felt it was “something my teenage self would never have predicted.”

“Tupac was everywhere when I was in high school and while I was a huge fan, my parents/teachers/etc were not so thrilled with the example they believed him to be setting,” he said. “Flash forward a quarter-century and his lyrics are now being taught in school.”

Preston said he and his wife are avid readers and have been encouraging their young son, who is in the 7th grade, to read books like Lord of the Flies and 1984 over his summer breaks but this took him by surprise. “Tupac Shakur teaching my son about metaphor was not on my short list of 2022 topics,” he admits.

However, that’s not to say he’s opposed to the idea in any way. “I recall I had English teachers who would pull from Bob Dylan for their classes,” he said. “I would guess my son’s English teacher is simply pulling from her own personal experiences.”

Preston added: “Tupac passed more than a decade before my son was even born, so he’s only aware of him as a ‘historical figure’ and isn’t familiar with his music at all; the wife and I were far more excited about this than he was.”

Even so, he said he was surprised to see the assignment “given how vilified Tupac and rappers in general have been” and especially so as they live in Texas, a state he thinks “tends to be painfully conservative with their public schooling.”

One user, writing as Salamanderhead, commented: “this is cool. Tupac has a lot of great songs and lyrics.” Another user, Andyyougoonieee said: “I did a school project with this poem in 1999, just a few years after his death. It’s a fantastic poem.”

The post got others like devbp thinking. “Ever since high school English I’ve wondered why there aren’t more modern and relevant artwork that is exposed and analyzed,” they wrote. “Like sure poems from the 19th century are interesting and represent some random metaphor for nature or growth, but where is the art that represents and is a metaphor for today’s experiences?”

“I agree with what you are saying,” chicagotodetroit replied. “I had an English teacher who LOVED his job, and every student loved his class because he really made it interesting. But I could never get into poetry because I just couldn’t relate.”

Preston said he was “surprised and pleased” at the response to the post.
“I think the broader culture has turned a corner on rap and is far more likely to see it as legitimate music, and I (along with many other Redditors) were appreciative to see that represented on a middle schooler’s homework,” he concluded.