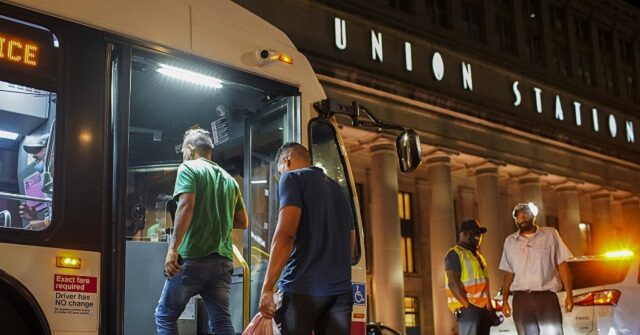 Chicago Mayor Lori Lightfoot claims Texas Governor Greg Abbott is “manufacturing a human crisis” by sending 50 more migrants to the Windy City on air-conditioned buses. On the day the 50 migrants arrived in Chicago, approximately 3,774 arrived by illegally crossing the border from Mexico into Texas.

“He is manufacturing a human crisis, and it makes no sense to me,” Mayor Lightfoot said in a statement broadcast by ABC7 in Chicago. “It’s decidedly unpatriotic and un-American. I understand the pressures that the people of Texas and some of the other border states are under. We see that on a daily basis. But the thing to do is not this.”

The Chicago mayor did not outline alternative ideas in the statement.

The mayor seemed to ignore the real human crisis taking place along the Texas border with Mexico where nearly 4,000 migrants are illegally entering on a daily basis.

She did not mention the city of Eagle Pass where the community is dealing with the drowning deaths of 13 migrants from a single border crossing last week.

She also did not mention the humanitarian crisis occurring in her own city where at least 46 people were shot during the Labor Day weekend, Breitbart News reported.

Approximately 110 migrants volunteered to board the two air-conditioned buses for a free trip to Chicago in question.
“President Biden’s inaction at our southern border continues putting the lives of Texans—and Americans—at risk and is overwhelming our communities,” Governor Abbott said in a written statement as the first bus of migrants departed to Chicago. “To continue providing much-needed relief to our small, overrun border towns, Chicago will join fellow sanctuary cities Washington, D.C. and New York City as an additional drop-off location.”

“There could be a level of coordination and cooperation, but he chooses to do none of those things,” Lightfoot said during her press conference. “I think the decent human thing to do is to cooperate and collaborate.”

The lack of federal coordination while busing thousands of migrants to cities across Texas and the nation led San Antonio to recently threaten to bus migrants back to the border, Breitbart’s Randy Clark reported.

While the mayors of the sanctuary cities of Chicago, New York, and Washington, D.C. try to determine how to house a few thousand migrants over a period of a few weeks, officials in Eagle Pass, Texas, are struggling to figure out how to bury the dead migrants found on local riverbanks and ranches.

A U.S. Customs and Border Protection source told Breitbart Texas that the director of Memorial Funeral Home in Eagle Pass reported his facility is beyond capacity and can no longer accept remains of migrants.

Following the burials of ten unidentified migrants in a mass grave, a local county official told stated, “Today’s burial of ten migrants did not do much to change the overall situation,” the county official stated. The official blamed the situation on the recent spike in the number of migrant deaths in the Rio Grande and on ranches where migrants are being smuggled.”

Following the busing of migrants to the three sanctuary cities, Governor Abbott said, “Since beginning this busing strategy in the spring, thousands of migrants have been transported to these sanctuary cities while providing much-needed relief to Texas’ overwhelmed border communities.”

During the period of time that Abbott sent approximately 10,000 migrants to these three cities, more than a half-million migrants illegally entered Texas.