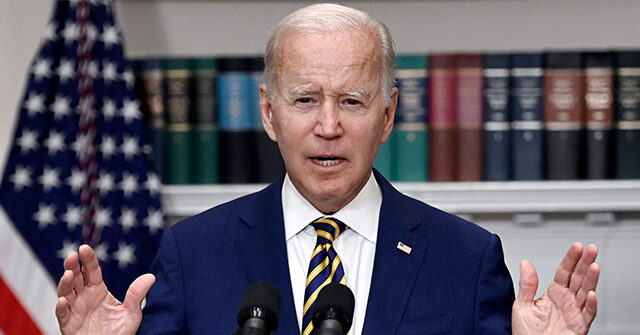 President Joe Biden’s White House told Reps. James Comer (R-KY) and Jim Jordan (R-OH) that the administration will not comply with House Republicans’ outstanding oversight requests, according to a letter obtained by Politico.

Although the Republican Party will not regain control of the House majority and committees until next month, several top House Republicans have already sent records requests to Biden’s White House in anticipation of the investigations they plan to conduct.

House Republicans are preparing to investigate the Biden White House for several things, including the ongoing border and fentanyl crises, the energy crisis, Biden’s withdrawal from Afghanistan, Hunter Biden’s business dealings, and the origins of the coronavirus.

However, White House Special Counsel Richard Sauber told Reps. Comer and Jordan that the Biden administration does not plan to respond to the records request they have made in recent weeks.

Sauber argued the Republican representatives’ records request were constitutionally illegitimate because the GOP is not yet in control of congressional committees.

“Congress has not delegated such [oversight] authority to individual members of Congress who are not committee chairmen, and the House has not done so under its current Rules,” Sauber wrote.

However, Sauber did not rule out complying with future requests made when the GOP takes control over the Oversight committee in January.

“Should the Committee issue similar or other requests in the 118th Congress, we will review and respond to them in good faith, consistent with the needs and obligations of both branches,” Sauber wrote. “We expect the new Congress will undertake its oversight responsibilities in the same spirit of good faith.”

“Targeting parents. Afghanistan. Hunter Biden’s business dealings. The American people deserve answers, but the Biden admin is doubling down on playing political games to bury the truth,” Rep. Barry Moore (R-AL) tweeted. “They can delay, but Republicans are committed to giving the American people accountability.”

The American people deserve answers, but the Biden admin is doubling down on playing political games to bury the truth.

They can delay, but Republicans are committed to giving the American people accountability.

After Politico published the story about Sauber’s letter, House Republicans accused the White House of leaking the letter to the outlet.

The White House leaked this letter to @politico last night.

The White House then gave Politico a briefing on the letter.

Did Politico let the White House edit their story too?

“This was clearly a planned and coordinated effort between the White House and ‘journalists’ at Politico,” the account added. “And it just shows how the media and White House will work hand-in-hand politically to obstruct legitimate constitutional oversight.”

“Big Media and Big Government are already working together to block legitimate congressional oversight,” Jordan tweeted. “What are they afraid of?”